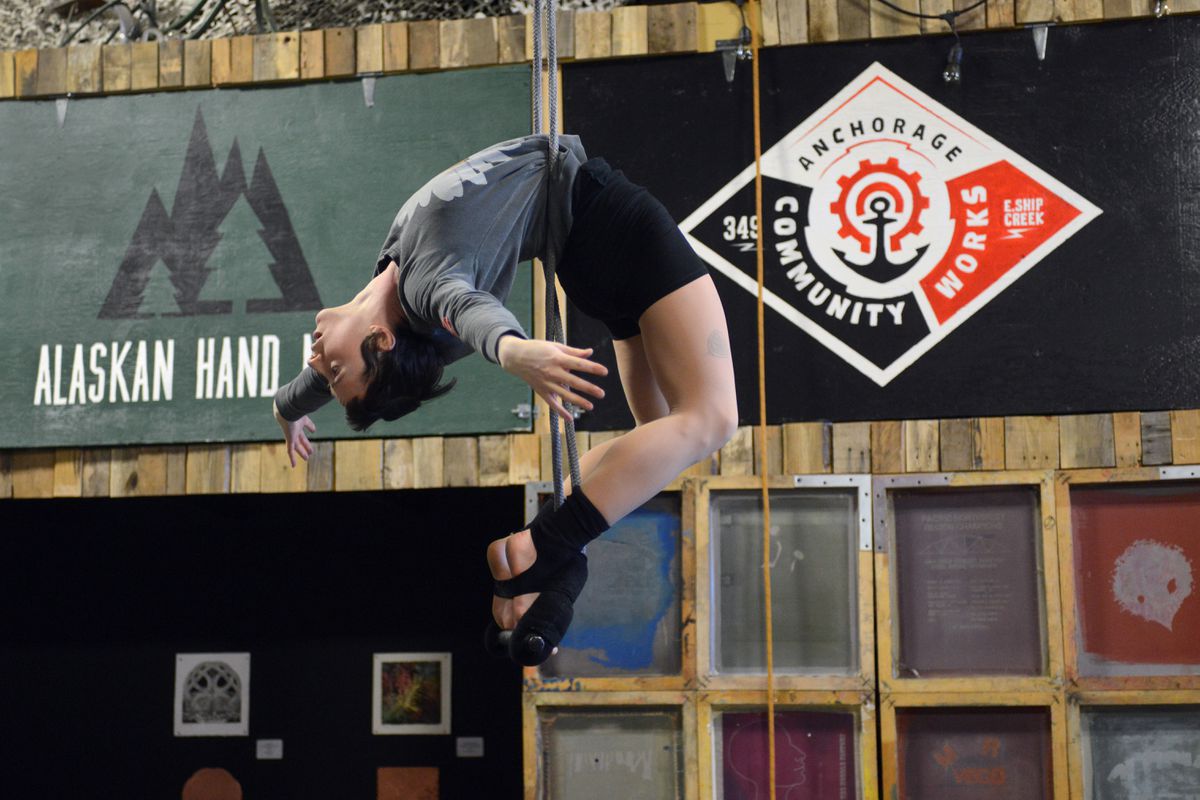 Ariel Schmidtke balances on her single-point trapeze as she practices an excerpt from her show “A Length of Rope” on Thursday afternoon, March 16, 2017, at Anchorage Community Works in the Ship Creek area downtown. (Erik Hill / Alaska Dispatch News)

Ariel Schmidtke balances on her single-point trapeze as she practices an excerpt from her show “A Length of Rope” on Thursday afternoon, March 16, 2017, at Anchorage Community Works in the Ship Creek area downtown. (Erik Hill / Alaska Dispatch News)

Air, as her name coincidentally suggests, is Ariel Schmidtke's element. The traveling circus artist is certainly at the greatest of ease when she's up in it.

On a recent Thursday, Schmidtke displayed her talents on the trapeze. To the haunting sound of Joanna Newsom's song "Baby Birch," Schmidtke became a form of moving poem. She would barely hang from one arm one moment and pull herself up confidently the next, climb steadily up toward the ceiling, rise, fall and extend into graceful poses, all while wearing a look of wistful determination.

"I'm not doing big swinging things. What I do is 'fixed trapeze,' " said Schmidtke, 29. "It's more using the trapeze or rope as a partner in dance. You're just using an apparatus instead of another person."

Schmidtke will present her solo show "A Length of Rope" on Saturday, March 25, at Anchorage Community Works in Ship Creek.

This aerialist's act is not a Cirque du Soleil-esque spectacle with fantastical costumes, sets and rippling silks.

Instead, Schmidtke is the centerpiece of a minimal, intimate and emotionally relatable performance accented with shadow puppetry and floor work.

The audience will see all of her expressions and hardworking, sometimes quivering, limbs up close.

"I like performing in (small venues) in the round where the audience is circled around you," Schmidtke said. "There's something really beautiful about doing circus movements right on top of your audience. I can actually make eye contact with the audience members, and that feeds my performance. When I perform for a large audience it's never the same."

The Washington state native and former gymnast landed in Anchorage nine months ago.

In that time she explored the state, bringing her show to the University of Alaska Anchorage Recital Hall, Seward Music and Arts Festival, Sheldon Community Arts Hangar in Talkeetna and the New Dances Now! choreography showcase in Homer.

In Anchorage, she worked as a barista at Middle Way Cafe and did educational outreach with kids at the Anchorage Museum's Imaginarium Discovery Center.

Schmidtke will be leaving for a tour of the Lower 48 in a couple weeks and this final performance is both a fundraiser for that tour and a goodbye kiss to Alaska.

"I wasn't sure if I was just going to stay the summer or stay longer and I ended up staying longer," Schmidtke said. "I felt embraced by the art community almost immediately. Finding people to collaborate with has been pretty easy and accessible. I do feel pretty well ingrained in the community. That's what I'm going to miss about Alaska most."

[In Ruby Jones' new piece 'Pearl,' a portal to a self-destructive psyche]

Schmidtke made it a point to share this performance with some of those who made her stay so fruitful.

"A Length of Rope" will be preceded by a 45-minute variety show starring local artists including Nick Carpenter and his experimental pop band Medium Build.

Those acts will prime the audience for Schmidtke's finale, which tackles the difficulty of making decisions both life-changing and less urgent through tense moments of struggle and cathartic gestures of letting go.

Schmidtke said her aim is making art open-ended enough for audiences to impose their own meanings on it.

Local multimedia performing artist Fiona Rose Worcester, who shared the stage with Schmidtke at UAA and will be providing entertainment during set breaks in Saturday's show, has her own take on lessons in "A Length of Rope."

"It's a journey about an individual departing and the internal struggle they face in leaving behind something or facing something in the future," Worcester said. "It's this tension between wanting to have a place where you belong and kind of a wanderlust."

The wanderlust element definitely applies to Schmidtke, who said she's content at the moment with the wayward circus performer's life.

"I really loved gymnastics when I was a kid but when my gym closed down I had no other options," she said. "I knew this was something I could probably get into easily. This is a route a lot of gymnasts take, because it's more low-impact. They have the physicality for it and it's easier on your body."

To test out this potential new career, Schmidtke began training and performing with Dream Science Circus in Bellingham, Washington. She took to it quickly, and soon joined the New Old Time Chautauqua Tour, which brings circus arts to rural communities. Through Chautauqua, she made the connection that spurred her stint in Alaska.

"There was a girl on tour from Talkeetna, so when I moved up to Alaska she set me up with people from Anchorage," Schmidtke said. "The circus community worldwide is surprisingly connected because it's not a very large community."

Schmidtke is inspired by the French brand of circus arts known as Nouveau Cirque, which favors a more theater-based, smaller-scale style. In 2011, she studied the art at France's Academie Fratellini.

Schmidtke developed "A Length of Rope" last year during a sojourn in North Carolina.

"I wanted to write a solo show, which is a huge challenge. Most people doing aerials do 5- to 10-minute acts maximum because it is so physically taxing," she said. "… (T)o create an entire solo show where I can be onstage for half an hour is very difficult."

The audience can count on Schmidtke giving her all for this last blast in Alaska.

A Length of Rope