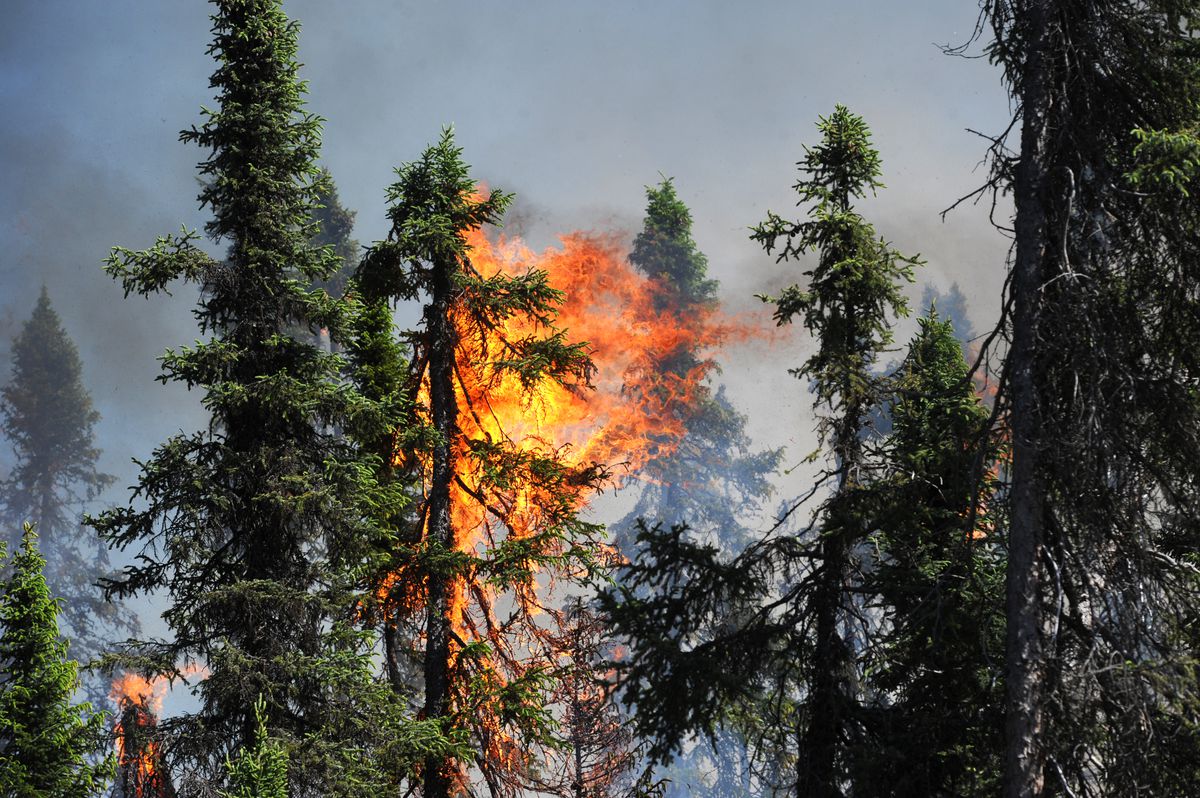 Jurors heard the first frantic 911 calls that alerted authorities to the start of the Sockeye wildfire as the trial for the couple accused of starting it continued Wednesday.

The calls outlined the time frame for the fire's start and also marked a tense moment for those gathered in the Palmer courtroom.

Greg Imig, 61, and his wife, Amy DeWitt, 43, are each charged with a dozen counts related to starting the blaze, including second-degree negligent burning, failure to obtain a burn permit, burning without clearing the area, allowing the wildfire to spread and leaving the fire unattended.

The fire burned more than 7,000 acres and destroyed over 100 structures, including 55 homes. Located in a neighborhood of numerous sled dog mushers, the fire killed animals, including pets and sled dogs. The fire cost the state more than $8 million to fight.

Palmer dispatch supervisor Rebecca Frey told jurors that the first 911 call associated with the fire came in June 14 at 1:12 p.m.

Frey did not identify who the caller was during testimony. But in opening statements, defense attorney Kevin Fitzgerald told jurors it was DeWitt who made the first call.

In the 911 call played for jurors, DeWitt tells the dispatcher through heavy breathing that "we have a fire."

The dispatcher asks her for a location and whether anyone is in the house. DeWitt responds with the streets the fire is located by and says there is no house, only that the fire is "out in the woods."

"It's really bad," she tells the dispatcher, muttering "oh my God," in between questions.

"It's getting bigger, it's just taking over the whole forest," DeWitt tells her.

"We're going to have lots of help coming out there shortly," the dispatcher tells DeWitt, "just try to keep everybody you know out of the area."

"We have, we have," DeWitt responds.

A woman supporting Imig and DeWitt nudged a fellow supporter when jurors heard the dispatcher's direction to DeWitt. Others in the courtroom gallery — mostly victims — passed a box of tissues around. One woman left the courtroom in tears.

Victims of the fire have expressed frustration that the couple failed to offer assistance during the fire. On Monday, investigators told the jury that it appears the couple left the Willow property "in a hurry," leaving things behind at the scene. Fitzgerald argued on the first day of the trial that the couple was heeding the direction of the 911 operator when they fled to Anchorage.

Frey was one of five witnesses to testify Wednesday, including other first responders and fire investigators.

Norm McDonald, fire management officer for the Alaska Division of Forestry, testified about the process of getting burn permits and how the division determines fire danger levels. In opening statements last week, defense attorney Fitzgerald acknowledged that Imig failed to obtain a burn permit for several burn piles the couple had on their property the weekend of the fire.

In the days leading up to June 14, the fire danger was considered high, McDonald testified. He said there were numerous signs on the roads between Anchorage and Willow depicting the fire safety character Smokey the Bear, listing the fire danger in the area and also including a sign attached saying "burn permit required."

The permits are available online or at fire departments and include basic instructions on how to keep a fire safe.

"If you follow these, you won't have a fire in even dry conditions," McDonald told jurors.

The permits also include a number permit holders are required to call the day they burn in order to make sure if it is safe to do so. Fitzgerald pointed out that despite the high fire danger, there was no suspension of burn permits on the days leading up to the Sockeye fire.

State fire investigator Ethan Eley also began testimony Wednesday. Eley walked jurors through his first moments on the scene, including his efforts to secure the Ringler Circle property, which Imig and DeWitt's property is off, the night the fire began and the beginning efforts of his investigation. His testimony will continue Thursday.