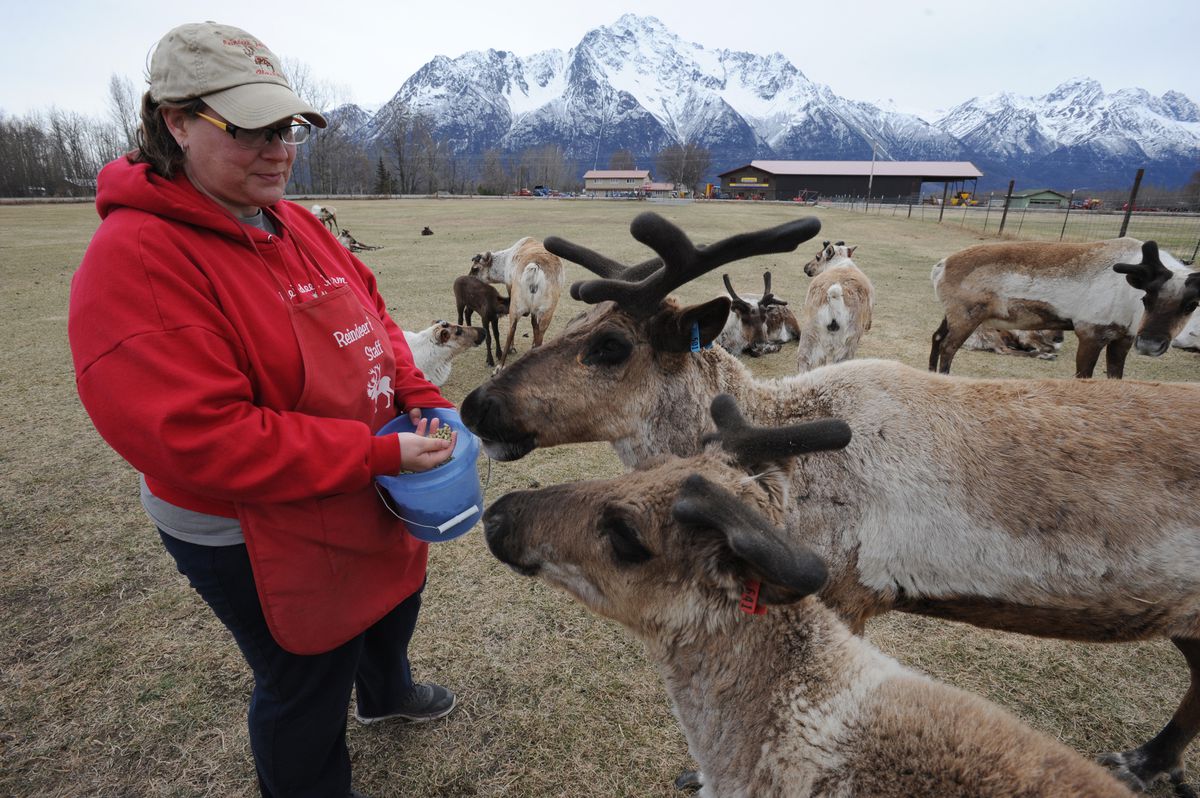 Denise Hardy is working toward keeping the reindeer farm in Butte operational after her father Tom Williams passed away last month. Williams founded the well-known reindeer farm in 1987, on the dairy farm that he grew up on in the 1950s. (Bill Roth / Alaska Dispatch News)

Denise Hardy is working toward keeping the reindeer farm in Butte operational after her father Tom Williams passed away last month. Williams founded the well-known reindeer farm in 1987, on the dairy farm that he grew up on in the 1950s. (Bill Roth / Alaska Dispatch News)

On Tuesday, she trained new employees as baby reindeer gamboled on the greening pastures in the shadow of Bodenburg Butte.

The state's most famous reindeer farm is gearing up for a busy Mother's Day and a summer season filled with visitors.

But last week, even with all that activity, Hardy was struggling for motivation.

Tom Williams, her father and the driving force behind the farm, was buried on Bodenburg Butte Sunday. Williams not only started the reindeer farm, but cleared the way for Alaskans around the state to raise captive caribou.

Williams died of sudden cardiac arrest the day after Easter. His wife Gene — famous at the farm for her welcoming nature and raspberry bushes — died last year.

Now the farm faces an uncertain future, though Hardy says she hopes to keep her father's legacy going.

"He was such a big part of the reindeer industry and making it available to the people of Alaska," Hardy said.

A federal law, the Reindeer Act of 1937, bars anyone besides Alaska Natives from owning Alaska reindeer.

Today, thanks to a legal challenge filed by Williams in 1987, a handful of people in Southcentral and the Interior sell reindeer from Canada or elsewhere as pets or for meat, state officials say.

Williams, an attorney, waged a decadelong fight before he won the right for non-Natives to own reindeer at the 9th U.S. Circuit Court of Appeals in 1997.

"I remember Tom's determination and willingness to (eventually successfully) fight the 'government' to defend his right to own the reindeer and house them at the Williams Farm in the Butte," former State Sen. Lyda Green, a Wasilla Republican, wrote in a remembrance on the farm's Facebook page. "Great perseverance and bravery."

Green in an interview Wednesday said Williams never came off as angry or bitter, despite the "grueling" legal challenge.

[Is a resurgence of Alaska reindeer herding coming?]

Life on the farm goes on.

As of Wednesday, 21 babies joined about 80 adult reindeer, from wobbly young ones just a few days old to older sturdier ones about a month old. They slept, played and sometimes let out a bullfrog bleat to find their mothers.

Hardy said her father always liked to do different things. He started thinking about reindeer — "cattle of the North," as he called them — in college, but didn't pursue them because of the law, she said.

Instead, the farm at one point raised beefalo, a cross between cattle and buffalo. Williams built a wind generator back in the 1980s. He used an alcohol still to try to make farm-equipment fuel from potatoes.

Williams was raised on the 160-acre Butte property when it was his family's dairy farm. He graduated from Palmer High School. He served in the Alaska National Guard and for two years as a missionary for The Church of Jesus Christ of Latter-day Saints in Atlanta, according to the obituary written by his family that praised his "adventuresome nature, strong work ethic, sense of humor and personality, and his desire to care for his family."

He and Gene met at Brigham Young University, where he earned a degree in Boy Scout Leadership. He later earned a law degree in Los Angeles. The family moved back to Alaska in 1975; Tom got a job as an attorney for the Alaska Railroad.

With their four children, the couple founded Williams Farm in 1980, selling hay and raising cattle. Gene served as farm manager.

The reindeer farm started in 1987. Williams got 20 animals from Canada on his first trip and another 100 later, Hardy said. Her parents originally thought they'd raise the animals for meat but then gravitated to bringing tourists out to ogle and pet the sociable ungulates.

"My dad loved to have people actually come out and be out with them," she said.

The farm ramped up tourist offerings over the years with fall and winter festivals. About 10 years ago, Williams helped start the Running of the Reindeer, a Fur Rondy event modeled after the Running of the Bulls in Spain that mixes loose reindeer with thrill-seeking Alaskans in a chaotic dash down Fourth and Fifth avenues.

Williams was still working on yet another project when he died last month, Hardy said.

He wanted to turn a log cabin at the farm into a gift shop. Williams cut the logs at the family's Point MacKenzie property. Her last conversation with her father was about plywood for the ceiling, Hardy said.

"He wanted to see us grow," she said.