Woman accused of starting Sockeye wildfire testifies in own defense 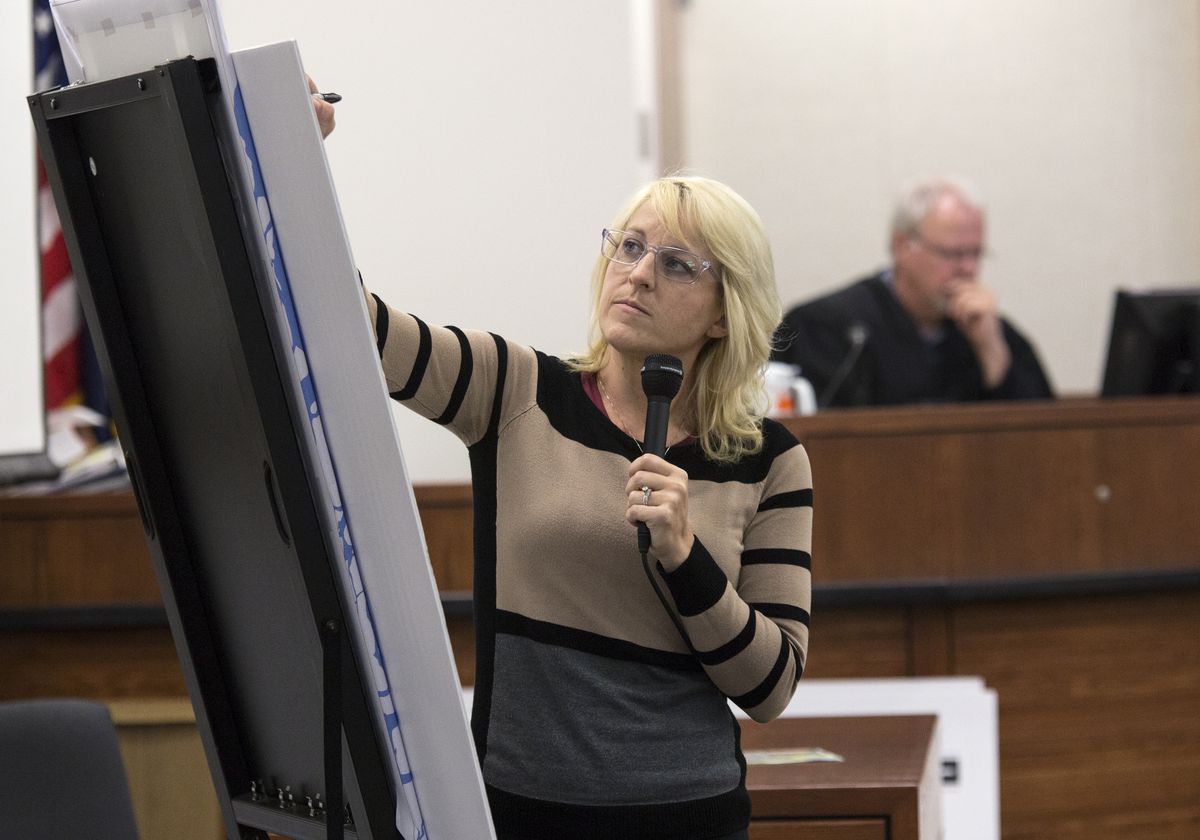 Defendant Amy DeWitt testifies in Palmer on Monday. Dewitt and Greg Imig are standing trial after having been charged with starting the Sockeye Fire in Willow on Sunday, June 14, 2015. (Rugile Kaladyte / Alaska Dispatch News)

Defendant Amy DeWitt testifies in Palmer on Monday. Dewitt and Greg Imig are standing trial after having been charged with starting the Sockeye Fire in Willow on Sunday, June 14, 2015. (Rugile Kaladyte / Alaska Dispatch News)

PALMER — For the last two weeks, Greg Imig and Amy DeWitt's attorneys have argued to jurors that the start of the destructive Sockeye wildfire could not have been at the couple's Willow property.

DeWitt told jurors in Palmer that herself Monday.

She testified that she started the burn pit suspected of causing the fire, but that she had watched it carefully, with a bucket of water nearby and plywood boards set up along the pit's perimeter to prevent it from escaping into the forest.

"It just never made sense to me," DeWitt testified regarding how the pit could have started the wildfire. "It was a cold fire Sunday afternoon."

For weeks, a state prosecutor has alleged in detail that the pit on the edge of Imig's property crept out into the forest and started the blaze that burned over 7,000 acres and destroyed more than 100 structures, including 55 homes.

DeWitt and Imig, 61, are charged with a dozen counts each, including second-degree negligent burning, failure to obtain a burn permit, burning without clearing the area, allowing the wildfire to spread, leaving the fire unattended and reckless endangerment.

DeWitt unexpectedly took the stand after the defense finished with its first expert witness Thursday afternoon. The second expert, Chris Warren, a private fire investigator from Colorado, was expected to open Monday. His testimony was pushed back later in the day.

In emotional and sometimes tearful testimony, DeWitt, 43, told jurors about the weekend leading up to the start of the fire. She and her now-husband Imig — they married in October 2015 — had gone to the area to clean up brush before the wildfire forced them to flee the property on Sunday, June 14, 2015.

According to DeWitt's testimony, they had spent all of Saturday clearing and burning brush in two burn pits they carefully watched. After working all day, she started a barbecue to grill pork chops for her "boys" — Imig and her 17-year-old son, Matthew, who had joined them for the weekend.

As she prepared the barbecue, she also decided to burn brush in a third burn pit located close to the grill.

The debris fire burned all through dinner. It never got higher than her knees, she testified, and appeared to burn out on its own Saturday night.

The next morning she and Imig had coffee near the burn area. After coffee, she placed a series of boards on top of the pit. If the boards caught on fire, she would know that the fire was still smoldering underneath.

It was later that afternoon while watering her lilacs that she looked across the property to see what her son was doing. She saw a fire in the trees behind him.

She told jurors that she ran toward her son, trying to move him behind her. As she tried to get a closer look at the fire, she called 911.

Talking to the 911 operator, she realized the fire was too big for the three of them to fight. In her haste she ran back through the woods to a generator shack, grabbing two gasoline containers and bringing them to the middle of the lawn — and away from the forest — to keep them from igniting. She told jurors she saw no signs of fire on the ground.

The three got into the RV and left, she said, heading north to try to scout out where the fire had started.

"We went out that way to see if we could see anything at all," she said. "All anyone could see was fire and smoke."

After about 15 minutes they turned around and drove south. They didn't stop again until they returned to Anchorage.

Expert testimony from Warren will continue in Palmer court Tuesday.