'Week of the Arctic' events will explore science, culture, food across the north 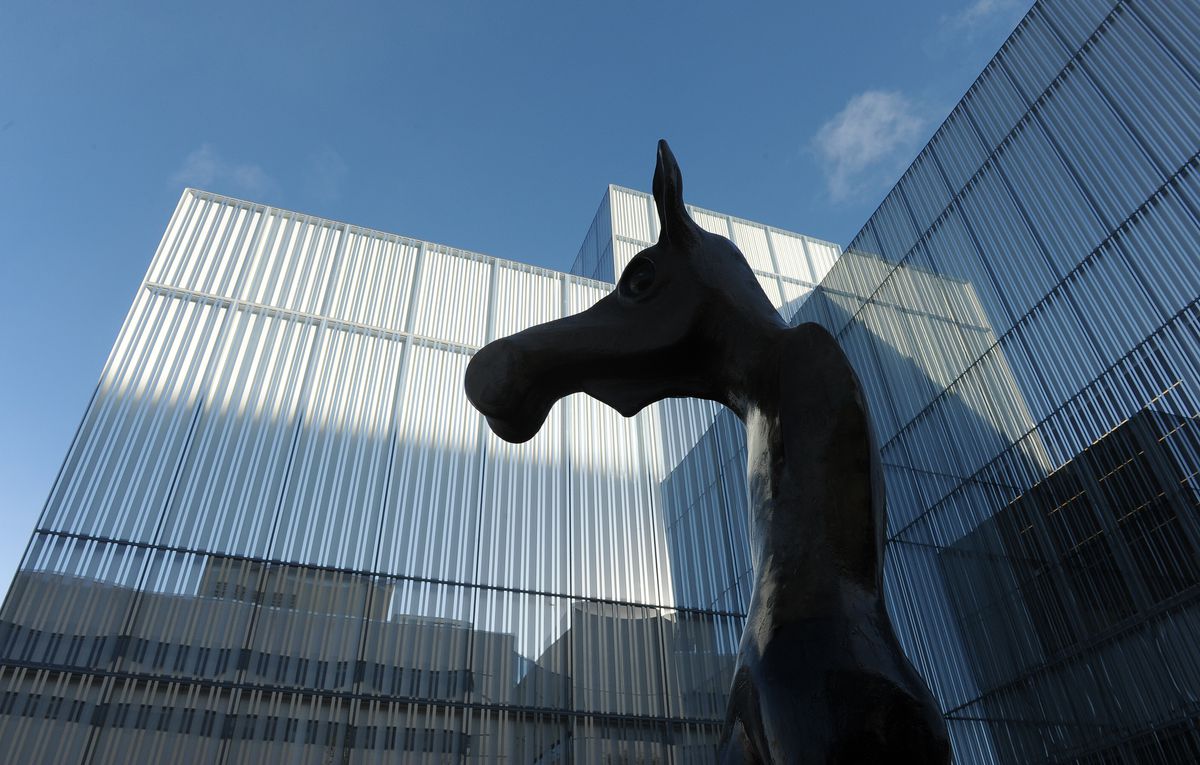 An 8 ft. half-man, half-moose sculpture stands next to the Anchorage museum in Anchorage, Alaska, Oct. 9, 2013. The museum is hosting events all weekend focused primarily on arctic topics. (Bob Hallinen / ADN)

An 8 ft. half-man, half-moose sculpture stands next to the Anchorage museum in Anchorage, Alaska, Oct. 9, 2013. The museum is hosting events all weekend focused primarily on arctic topics. (Bob Hallinen / ADN)

This week in Fairbanks, the United States will hand over the gavel for the Arctic Council to Finland. While some meetings and sessions surrounding the event are closed to the public, there is also a full slate of events in Anchorage and Fairbanks exploring the different facets of life in the north — featuring artists, musicians, innovators and experts from all eight Arctic nations.

The museum will offer free admission on Saturday and Sunday for the festival (Planetarium admission is extra, as is the Circumpolar Film Festival).

Here are the events on the roster; for more details see anchoragemuseum.org/nxn

Watch the Arctic Council chair transfer from the United States to Finland as it happens in Fairbanks at the Anchorage Museum. The council is made of Arctic nation and focuses on issues of sustainable development and environmental protection. The U.S. began its leadership of the council in 2015, and runs through the ministerial meeting Thursday in Fairbanks. The U.S., Canada, Greenland, Iceland, Norway, Sweden, Finland and Russia – are members of the council as well as six indigenous organizations.

Installation on view Thursday-Sunday; discussions at 1 and 2 p.m. Saturday at Anchorage Museum

Center/Periphery is a series of international art installations about places considered both "on the edge and at the center." The program includes talks, gatherings and performances, along with art installations by Armando Marino, KUO I-Chen, Graham Hogg and Eames Demetrios.

At 2 p.m. Saturday a panel will explore "places at the center of global movements, influence and discussion, much like the Arctic," including artists Marek Ranis of Poland, Marino of Cuba and I-Chen of Taiwan; Hogg of Scotland; and scholar Robert Templer of Spain and Hungary).

Noon on Friday, and 10 a.m. Saturday and Sunday at Anchorage Museum

The Polar Bear Garden exhibition looks at the connections between Alaska and Russia since the U.S. purchase of Alaska in 1867.

Seven DJs from Iceland, Norway, the U.S., Canada, Greenland, Finland and Russia along with Alaska artists will play for a series of dance parties.

The Circumpolar Arctic Film Festival will bring together film festival directors from across the Arctic. A weekend pass is $20 or $10 for each venue.

On Friday, the Anchorage Museum will show "Northern Shorts" on the fourth floor at 8 p.m. At 10:30 p.m. "Terror Under the Midnight Sun (Invasion of the Animal People)" will be shown on the lawn, followed by "Dead North Shorts" at 11:45 p.m.

On Sunday, starting at 1 p.m. and running until after 4 p.m., there will be screenings at the Anchorage Museum on the fourth floor and in the auditorium. See on.adn.com/2q7piz0 for details.

Speakers representing all eight Arctic nations will deliver TED-style talks Saturday. There will also be interactive exhibits and breakout discussion sessions. Some of the topics will be cold climate housing, Northern agriculture, tourism, renewable energy, telecom and education.

Artists, artisans and craftspeople from across the Arctic have been invited to participate in this two-day cultural exchange. There will also be music and dance performances, poetry readings and Arctic Winter Games demonstrations.

'I am Inuit' discussion

Beginning in 2015, photographer Brian Adams traveled to Alaska Arctic villages to capture the portraits and stories of people, as well as the landscape, as a meaningful way to promote understanding and to connect many people outside the Arctic region. Join a discussion with Adams, James Stotts, president of the ICC-Alaska, and Alaska Arctic residents who have participated in the project.

Anchorage first lady Mara Kimmel and visiting Central European University scholar Robert Templer will explore the many ways humans – from the Arctic and other places – have been adaptive and resilient. The discussion will be moderated by Fran Ulmer, chair of the U.S. Arctic Research Commission, and include a special introduction and a poetry reading by Toby Widdicombe. Templer is director at the Shattuck Center on Conflict, Negotiation and Recovery at CEU and has worked on public policy and conflict issues for the last 20 years around the globe.

Try Northern dishes created by chefs from Alaska and several Arctic nations (available for purchase) and dance to live music and tunes, including The Modern Savage (Alaska), Hermigervill (Iceland) and Lady Waks (Russia). There will be Arctic Winter Games demonstrations and Alaska beers in the beer garden. Meet J Raymond Mireles to learn more about his "Neighbors" project, featuring portraits from neighborhoods across all 50 states. Free.

Eight food trucks representing different Arctic nations will be serve a recipe specific to its nation using wild Alaska seafood from 4 to 8 p.m. Saturday at the museum. Four small plates will be available for $10. Fifty percent of the proceeds will support the Alaska Food Policy Council.

Chefs from Norway, Iceland and Russia will discuss the value of local ingredients, what is meant by Arctic foods, emerging trends and how to continue to experiment with food culture and food systems. The panel will be moderated by Dr. Elizabeth Hodges Snyder of UAA and the Alaska Food Policy Council.

Directors from eight Arctic nations will discuss the changing landscape of filmmaking and Northern filmmakers' role in world cinema. These professionals will touch on film festivals' challenges and influences on their respective communities.

DJs from Iceland, Norway, Russia, Canada, Greenland and Finland will talk about their commonalities, differences, challenges and opportunities. They'll also discuss what is meant by "Arctic Music," the marketing and export of Arctic music and offer listening suggestions. This panel discussion will be taped as a pilot episode for a podcast on Arctic Music.

Alaska's science, policy and business community have been meeting all week for a series of events called the Arctic Interchange. Here are some of the events open to the general public without registration. (For a full schedule, see akarctichost.org)

'I Am Inuit' art exhibit

Beginning in 2015, photographer Brian Adams traveled to Alaska Arctic villages to capture the portraits and stories of people, as well as the landscape, as a meaningful way to promote understanding and to connect many people outside the region to the Arctic. See the photographs from this project.

Includes presentations of the accomplishments of the Arctic Council during the U.S. chairmanship and information about the Finnish chairmanship program.

Panel discussion: 'The Challenges of Covering a Changing Arctic'

Covering the Arctic presents unique challenges for both international and local news outlets. A panel will explore the various approaches these different news outlets use to overcome those challenges as well as the opportunities that the changing north provides for reaching new audiences with new forms of storytelling.