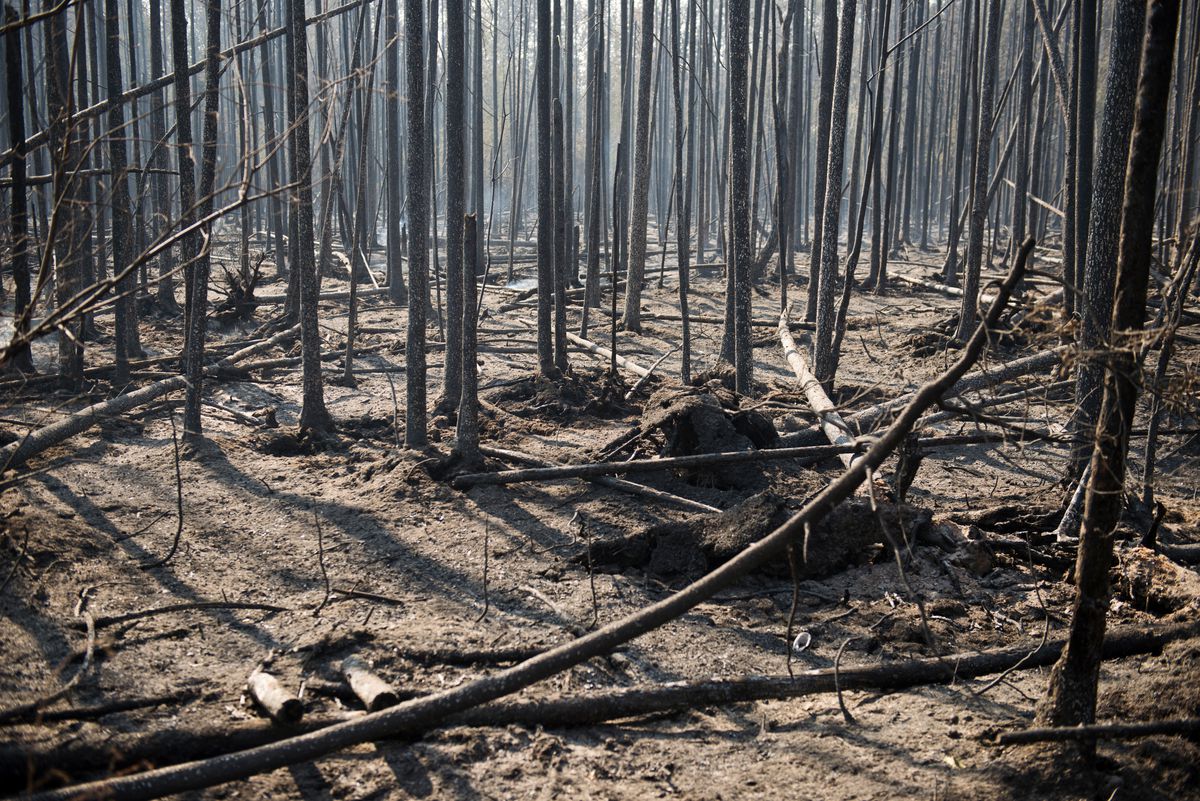 PALMER — After weeks of testimony, jurors will begin deliberating Thursday as to whether or not an Anchorage couple is responsible for starting the destructive June 2015 Sockeye wildfire.

Over almost three weeks, Assistant District Attorney Eric Senta presented over a dozen witnesses and offered hundreds of photos and exhibits he said showed the wildfire started as a result of actions taken by Amy DeWitt, 43, and Greg Imig, 61, over the weekend leading up to the blaze.

The state contends the fire started when a burn pit on the edge of Imig's Willow property crept out into the forest in warm and windy conditions. It was their recklessness, Senta told jurors Wednesday, that led to the blaze that burned over 7,000 acres and destroyed over 100 structures, including 55 homes.

Through the course of the trial defense attorneys disagreed, arguing the state forestry investigation was flawed in both the scope and the science.

[Woman accused of starting Sockeye wildfire testifies in own defense]

DeWitt and Imig are charged with a dozen counts each related to the fire, including second-degree negligent burning, burning without clearing the area, allowing the wildfire to spread and reckless endangerment.

Senta reiterated days of testimony in his closing statements — including how the investigators had examined factors like charring patterns, ash on the ground and the plywood boards laid across the pit. Photos were presented to the jury detailing the path prosecutors said the fire took, including one showing a pattern of ash leading from the pit to the forest.

"(It's) a yellow brick road right through middle of the moss that (DeWitt) testified had smoldered in the past," Senta told jurors. "It clearly shows the path from the causation pit."

Defense attorney Kevin Fitzgerald disagreed with that assessment in his own closing argument.

It was a "'yellow brick road' for the state," Fitzgerald told jurors, referring to the same photo. "That's an appropriate analogy because, in any number of different circumstances we found out, the state didn't want the green curtain pulled back to actually see what was going on behind it."

['We have to live with it': Victims testify on the devastation of the Sockeye wildfire]

Since the beginning, the defense team — including attorney Philip Shanahan — reiterated to the jury that they don't need to prove how the wildfire started, only that the state didn't provide evidence "beyond a reasonable doubt" to prove the couple are guilty of the charges.

The defense brought in private investigators Brian Balega and Chris Warren to challenge the state's investigation. In separate testimony, they both referenced the national Wildfire Origin and Cause and Determination Handbook cited by both the defense and prosecution as the guide used to investigate forest fires.

For example, a generator shed located on the edge of the property should have been more closely considered, Balega told jurors.

State investigators noted earlier they had found no proof the generators had been energized at the time the fire started. Balega told jurors given their proximity to the fire, the generators found on the property should have been taken into evidence.

Even things like the boards DeWitt used to cover the pit were not taken into evidence, Shanahan noted.

Warren, a private investigator hired by the defense and based in Denver, Colorado, testified Monday that based on his review of the state's investigation he could only determine the start of the fire was inconclusive.

Senta questioned the defense experts on their own conclusions based on the evidence. He noted Balega first visited the property in late 2016 and Warren in fall of 2015 — well after the fire had taken place — and suggested the scene they visited might have been contaminated by months of fire-fighting efforts in the area.

All of the charges against Imig and DeWitt are misdemeanor charges. The class A charges, which include negligent burning and reckless endangerment, carry fines of up to $10,000 and up to a year in jail. If found guilty, they could also be liable for double the $8 million it cost the state to fight the blaze.