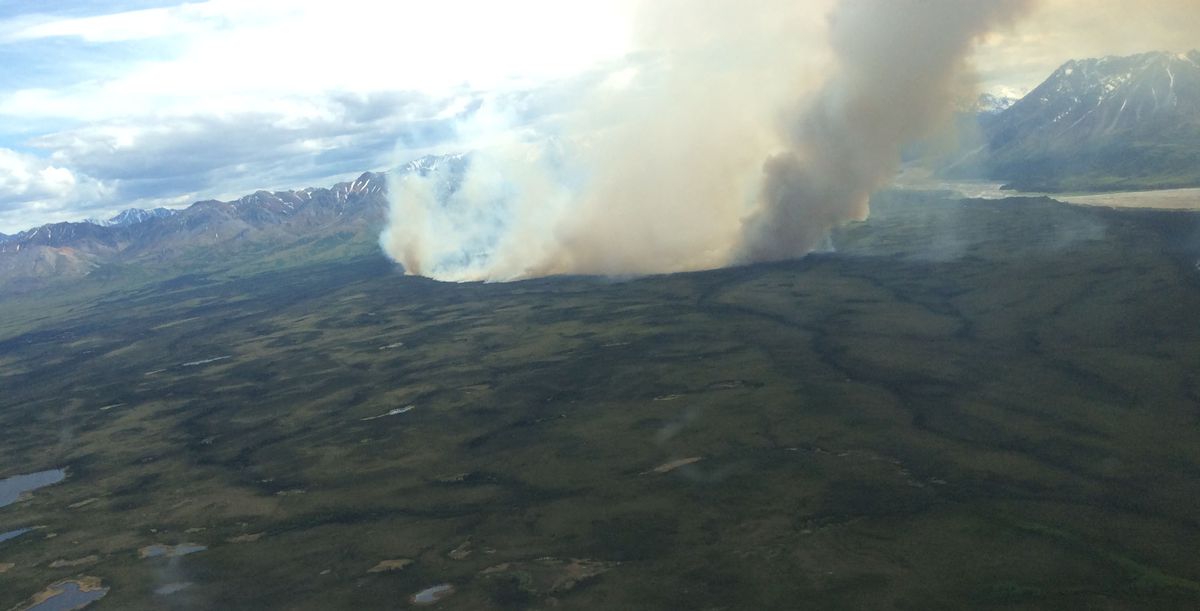 The fires have burned a total of 44,000 acres in that region of the state as of Friday afternoon, the Alaska Division of Forestry said. Seven of the fires are being staffed while the remainder are being monitored.

"Several fires have received varying amounts of precipitation and temperatures cooled considerably on Thursday night and Friday as a weather system moved in from the Bering Sea," the forestry division said, adding that the weather pattern is forecast to persist into early next week.

Currently the highest priority in Southwest Alaska, the 2,675-acre Bell Creek Fire is holding steady within 2 miles of the village of Crooked Creek, as close as it's been for the past two days, fire officials said.

Firefighters have set up protection measures, including pumps, hoses and sprinklers on the north end of the village, the forestry division said. Light rain fell on the fire overnight Friday, but 61 firefighters remain on the ground in anticipation of the blaze reaching Crooked Creek.

The Pitka Fork Fire was "extremely active" Thursday, but its acreage hovered around 4,030, officials said. Crews are working to secure cabins in the area of the fire, burning 60 miles east of McGrath, they said.

The largest fire among those staffed in the region is the 8,462-acre Ball Creek Fire burning about 75 miles southwest of McGrath. The perimeter of the fire is 75 percent active; 2- to 4-foot flames are normal, but pockets of 30-foot flames have been observed during flyovers, the forestry division said.

"The fire is creeping, running and torching down slope in black spruce, tundra and mixed hardwoods," officials said.

The remainder of the staffed fires are smaller, varying in size from 8 to 352 acres. Crews of five to 22 firefighters are extinguishing hot spots for the fires.

Two of the fires in the region without boots on the ground have burned about 24,000 acres, according to the forestry division.

The American Creek Fire, totaling 11,498 acres, is torching wilderness about 42 miles west of McGrath. The fire's perimeter is about 25 percent active, officials said, and there was some limited growth on the south and west ends of the blaze. Fortunately, there reportedly was no movement to the east, where cabins rest on the shores of the Innoko River.

Slightly bigger at 12,315 acres, the Little Yetna River Fire is only 5 percent active, with its flames creeping slowly outward on its south side, according to the forestry division.

The South Fork Salcha Fire was first reported Thursday morning about 70 miles southeast of the Interior city, and about 2 miles north of Pogo Mine Road.

"The fire is believed to be lightning caused and was estimated at 100 acres on initial size up but has since grown to an estimated 3,600 acres as of noon on Friday," the forestry division said.

Nothing is immediately threatened by the fire, so fire officials have held off on staffing it.