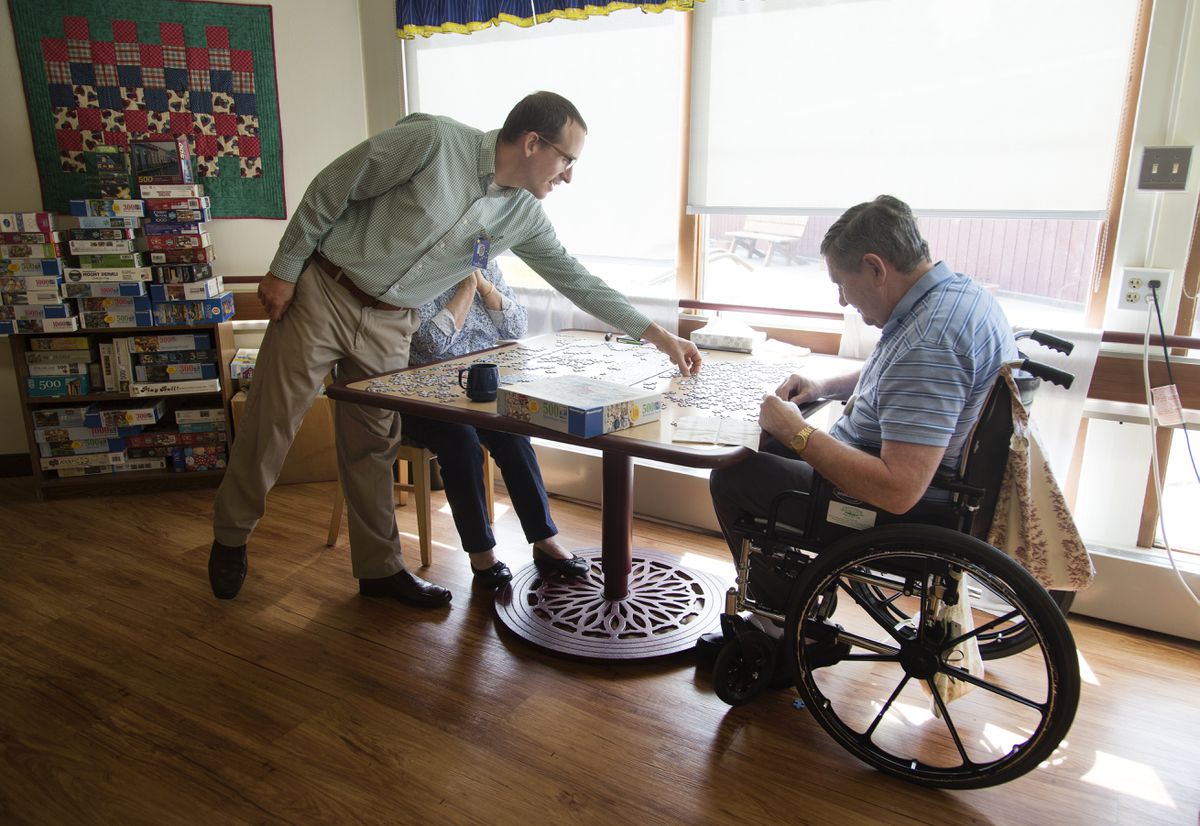 More quietly, however, static funding since 2014 has led to staff layoffs, empty beds and longer wait lists at the state-subsidized homes that serve Alaska's elders, many of them longtime residents.

Budgets not keeping pace with contract-mandated employee wage and cost-of-living increases have created a $1.3 million shortfall in the last three years, according to Pioneer Home officials. Going into budget negotiations in Juneau this week, the Senate proposal included $818,500 in Pioneer Home reductions.

So far, the shortfall has led to the elimination of 36 full- and part-time employees through attrition or layoffs since 2014, according to acting Pioneer Home Division director Julie Sande.

That has led to longer Pioneer Home wait lists, she said: As of last month, there were more than 330 people ready to move in within 30 days. There were about 200 a decade ago.

The wait list is growing due to the combination of increasing numbers of senior Alaskans and fewer beds, Sande said.

"I am concerned about the growing number of seniors in our communities," she said. "It's very difficult to say to community members that you're just not going to get to them."

'A lot of money a month'

The past few years of cuts at the Alaska Veterans and Pioneers Home in Palmer translate to six of 79 beds sitting empty despite a wait list of 130 or 140 people — beds that could also be generating revenue, officials say.

Each bed on hold because of short staffing is worth an average of $54,000 a year, according to state estimates.

The empty rooms line a corridor decorated with hanging military banners. Palmer is the only Pioneer Home in the state that also serves veterans through federal funding. Residents — three-quarters are supposed to be veterans — represent communities around the state from Bethel to Sitka.

"That's stupid!" said Dorothy Dittman, a retired U.S. Army staff sergeant and resident at the home for two years since she moved from Anchorage.

Dittman, wearing a black "Medieval Times" hoodie as she patrolled the facility recently, reeled off a rate summary: more than $2,000 a month for the lowest level of care, more than $4,000 for midlevel care and more than $6,000 for the highest.

Palmer laid off a full-time RN and a nurse practitioner during the cuts, according to administrator Joshua Shaver.

"This year, we're kind of in cross-your-fingers mode," Shaver said.

Waiting for a family member to make it into a home can be grueling.

It "only" took a little under a year to get her father, Tony, off the wait list and into the Palmer home, said Heather Anthony, a natural medicine practitioner who now lives in California.

During the wait, relatives with limited help from nurses and in-home helpers coped with emergency situations like falls and choking as well as daily feeding and bathing duties. The 68-year-old U.S. Air Force veteran who's lived in Alaska for about 45 years had suffered a stroke on top of existing heart disease and diabetes, Anthony said.

"Everybody was just exhausted because his needs were just increased so much over the previous year by the time he got in," she said.

Her father was "terrified" to move into a home, surrounded by people and giving up what independence he had.

"When he got there, he was happier than I'd seen him in 10 years since his stroke," Anthony said. "He loves the Pioneer Home — they're like family to him. He was so bummed when he heard this place might get shut down. He was in tears."

A letter from the now-retired director of Pioneer Homes in April warned that recommended state Senate budget cuts could close Palmer's Veterans and Pioneers home and maybe the Juneau Pioneer Home as well.

Politicians on both sides of the debate accused the other of playing political football with vulnerable seniors.

Gov. Bill Walker — his father lived at the Palmer home — reassured the public that he had no plans to close Palmer or Juneau homes.

Senate leaders later said an aide inadvertently assigned a $5.7 million reduction to the Pioneer Homes when it was supposed to be distributed across the state health department.

The Senate Finance Committee had also inserted special language into its budget allowing Walker's administration to spread the reduction to other health department programs. But administration officials promised to refuse in protest that it's the Legislature's job to specify cuts.

The Senate approved a rare "Sense of the Senate" — the first Senate Majority Leader Peter Micciche experienced in the Soldotna Republican's five years in that body. The formal statement assured the state's "cherished seniors and honorable veterans" that "all Pioneer Homes will remain open and fully operational."

Funding for Pioneer Homes has hovered around $62 million since 2014.

Now legislators are grappling with a $2.5 billion deficit and deep divisions on how to fund government.

As of Friday morning, the state budget that includes Pioneer Homes funding remained in limbo despite a special session convened to pass revenue and spending plans. The Legislature was expected to reconvene before a government shutdown on July 1.

Leaders last week said they hoped to restore funding increases for Pioneer Homes in the near future.

Rep. Les Gara, a Democrat from Anchorage and vice-chair of the House Finance Committee, said he didn't think it would "be a tough lift" to reverse some Pioneer Home cuts in the current budget.

This year, however, the new bipartisan coalition in the House is also proposing flat funding, as is the governor.

"We've used whatever power we have to propose flat funding. The governor proposed flat funding," Gara said. "We need to recognize there is something in reality called inflation."

The Senate's recommendation comes with a roughly $6.1 million reduction, though that includes the $5.7 million described as a mistake.

Micciche said the Senate is "willing, able and waiting" to finalize a Pioneer Home budget without cuts.

He said he also hopes flat funding will end in the future — he plans to look hard at Pioneer Homes programs once the session ends — but warned of potentially higher rates, too.

"Support for senior services is at the top of our list," Micciche said. "That doesn't eliminate our responsibility that those services are delivered efficiently. … We can't be unrealistic in thinking there won't be any growth to the cost of those services going forward."