A baby walrus hauled out on a gold-mining barge. He’ll now spend his life in captivity. 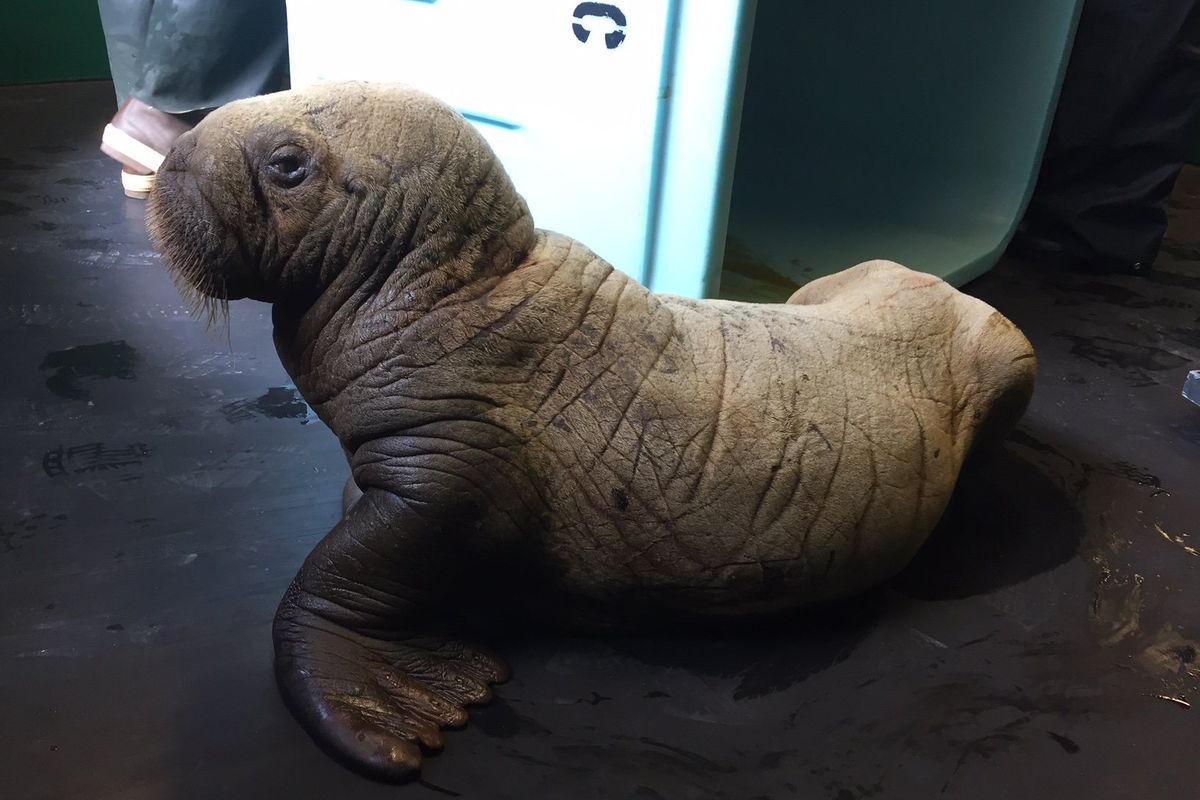 A lone baby walrus that last week hauled onto a gold mining barge in the Bering Sea off the coast of Nome is being rehabilitated at the Alaska SeaLife Center in Seward.

The 120-pound male calf showed up Wednesday, was flown to the center on Saturday, and is being cared for by volunteers and staff at the center's rehabilitation unit within view of the public, said the center's president and chief executive, Tara Riemer.

"He was very dehydrated when he got here," Riemer said. That is typical for stranded marine mammals. "It's a little too early to say he is out of the woods."

Walruses are highly social. This little critter – estimated to be 2 weeks old – stays close to staff and usually falls asleep up against whoever is closest, she said.

The crew of the AU Grabber, a gold mining dredge, discovered him on board, and he was still there when they returned the next day after spending the night in Nome.

The dredge was in the middle of open water. No mother walrus was nearby.

On Friday afternoon, the crew called the SeaLife Center's stranded marine animal hotline, which was the right step, Riemer said. The U.S. Fish and Wildlife Service, which has authority over walruses, was brought in. The Eskimo Walrus Commission also was contacted. Authorities signed off on removing the animal from the wild. Gay Sheffield, a University of Alaska Fairbanks assistant professor based in Nome, was the local responder for the move.

Anyone who finds a stranded marine mammal or seabird is urged to call the SeaLife Center's hotline – 888-774-SEAL or 774-7235 — first thing, before touching, approaching or moving the animal.

In the wild, walruses stay with their mothers for two years as part of a herd. Those recovered young, like this one, aren't candidates to be returned to the wild later on.

"There's no way we can teach him how to find clams on the ocean floor. It's not possible," Riemer said.

The young walrus flew in a fish tote on a Northern Air Cargo flight from Nome to Anchorage, where a SeaLife Center team including a veterinarian was waiting to check him over. He traveled, still in the dry tote, by pickup to Seward.

Flipper-footed pinnipeds can survive long stretches out of the water. This animal has a few sores, so it is doing better on dry land for now, the SeaLife Center says.

The walrus doesn't yet have an official name, though the gold mining crew started calling him Nugget.

He hasn't yet taken to a bottle, so is tube fed, multiple times a day, a watered-down, electrolyte-rich concoction designed for young marine mammals. It's sort of like a mix of walrus milk and Gatorade.

Meanwhile, visitors can watch through a bank of windows.

The rehab area that the center calls I.Sea.U. is a large quarantine space with a pool that for this early recovery time is not filled.

The SeaLife Center doesn't have space for adult walruses. If he recovers, he will be sent to a zoo or aquarium, preferably one with other walruses, Riemer said. Only about 15 walruses are in captivity in the United States, she said.

The center last rehabilitated a group of stranded young walruses in 2012. One soon died. Of the two survivors, one went to the Indianapolis Zoo and the other to the New York Aquarium.

Most people never get to see a baby walrus.

"Walrus are charismatic in this very cute-ugly sort of way, especially when they are little," Riemer said. "It's just unlike any other creature."