In Sitka hospital, a dog runs for help when owner has a seizure 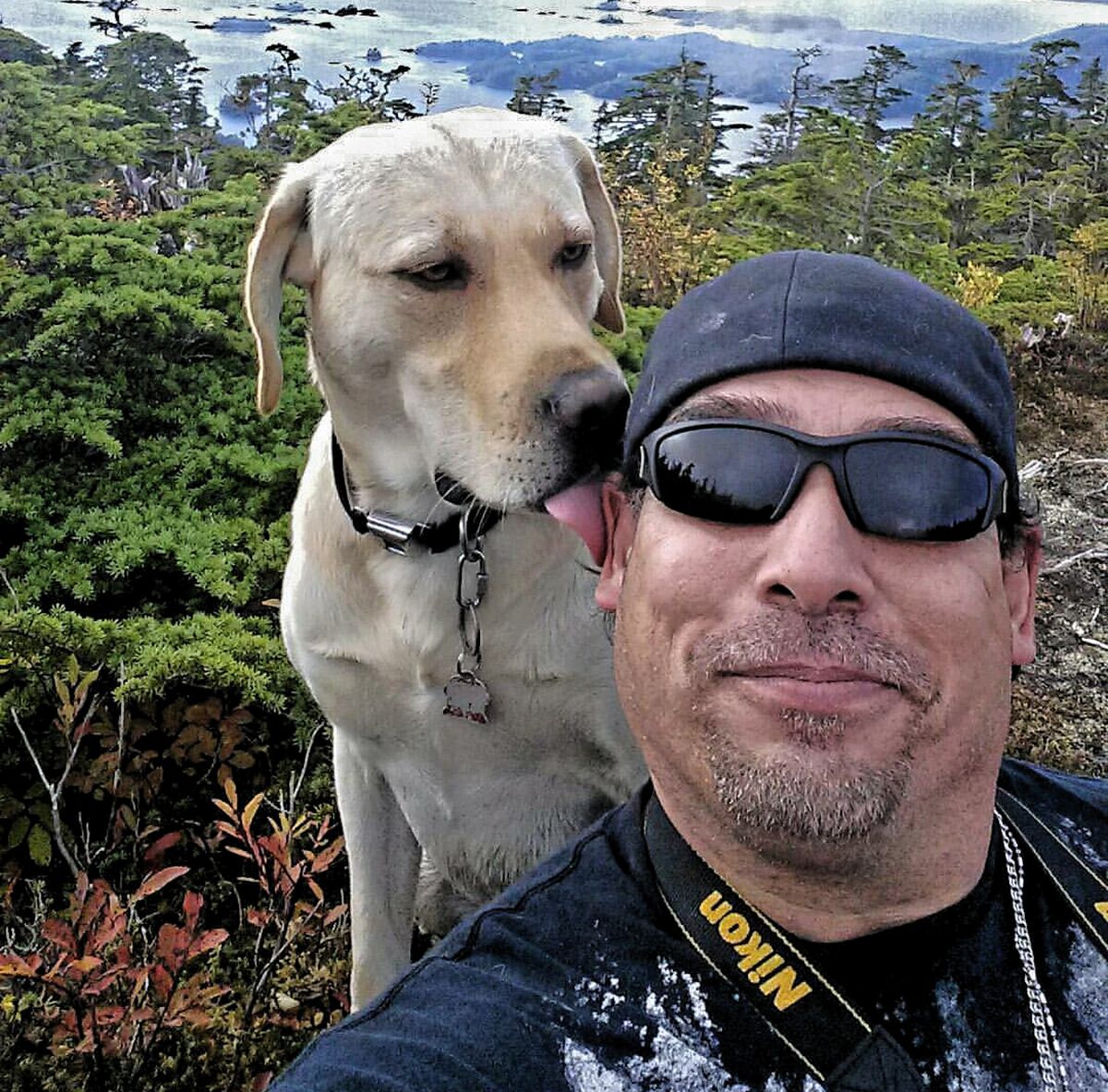 On Saturday, a big Labrador retriever named Thorr bounded up to the nurse's station in Sitka Community Hospital and nudged Ryan Huddlestun, twice.

Down the hall, Thorr's owner, Eric Lamont Skousen, was having a seizure. The nudges were a call for help, one Skousen couldn't give himself.

Huddlestun, a senior ward clerk at the hospital, said she'd never seen anything quite like it.

"The dog ran up, nudged me twice, made sure I acknowledged he was there, and took off back toward the room," Huddlestun said.

It was one of at least three times in recent days that Thorr has alerted Skousen's doctors and nurses to seizures. That was not part of Thorr's training as a service dog — and underscores a deep bond between him and Skousen.

In an interview Sunday, Skousen called it his dog's "Superman thing." Skousen, 52, was born with cerebral palsy, a neurological disorder that mainly affects body movement and muscle coordination. With his dog, Skousen walks, hikes, hunts and fishes around Alaska, but he has to really concentrate to use his left arm and can't move his left foot from his knee down.

Until this year, the last seizure Skousen remembers happened when he was 15. The oldest of four, Skousen spent much of his childhood in a Phoenix children's hospital. He's had some 20 surgeries to transfer and lengthen tendons to give him more mobility.

Skousen has had other service dogs over the years. Before Thorr, a chocolate Labrador named Pico de Gallo accompanied Skousen to a job in Sitka working with adults with mental disorders.

Thorr, named after the Viking god in honor of Skousen's Danish heritage — but with an extra R — is 3 ½ years old and nearly 100 pounds. Skousen is 240 pounds and 6 foot 3 inches tall, and Thorr has largely helped him with balance and mobility.

Just before he was hospitalized about a week ago, Skousen was taking Thorr hiking and fishing. After those excursions, Skousen can be bedridden for several days with painful muscle contractions.

But Skousen said his dad, a military police officer and then a Maricopa County sheriff's deputy, raised him not to let his cerebral palsy get in the way of being active, Skousen said.

"You've got to live life, got to enjoy it," Skousen said.

He and his dad always talked about fishing in Alaska. Skousen moved to Sitka about 11 years ago and plans to stay for the rest of his life. His jobs have included work as a private investigator in Las Vegas and most recently as a resident manager at an apartment complex for people with disabilities.

In January, his dad died. That's when the seizures started.

No cause has yet been identified for the seizures. But Skousen's sister, Nicole Metcalf, who lives in the Phoenix area, said the doctors have tied the episodes to overwhelming stress after their father's death. Skousen has only heard what happens during the seizures secondhand from nurses — he blacks out and has no memory of the episodes. Skousen is strong, and during a seizure on Saturday, he broke a railing on his bed. Metcalf said she worries about him falling and hurting himself.

That's where Thorr has come in.

"Thorr wasn't really put to the test a lot until recently," Metcalf said. "It's almost like he just went into working mode. He knew just what to do."

Mac Stewart, a travel nurse who works at Sitka Community Hospital, said over the phone Sunday that he'd worked in hospitals around the country, but had never encountered a service dog staying with his owner at the hospital.

Dogs can be trained to go get help, but usually it's on command, said Michele Forto, who co-owns Alaska Dog Works, the Willow-based company that certified Thorr as a service dog.

In this case, the two have a very close relationship, Forto said.

"When the recipient and the dog have a good symbiotic relationship, things happen, regardless of any kind of training."

Thorr is trained to sense chemical changes in Skousen, which happen during a seizure, and to look for help if Skousen falls down. But that training has not necessarily extended to a hospital setting, Forto said.

Skousen isn't a typical client, Forto said. Because of what his father instilled in him, he never acts as if he has an ailment. With Skousen hospitalized for his longest stretch of time as an adult, Thorr is on "high-intensity watch," Forto said.

Skousen does everything with his dog, and that dog is going to make sure he's OK, Forto said.

Skousen expects to stay in the Sitka hospital another 10 days. He'll then fly to Alaska Regional Hospital in Anchorage for neurological testing to figure out the reason for the seizures.

Thorr, of course, is coming too.