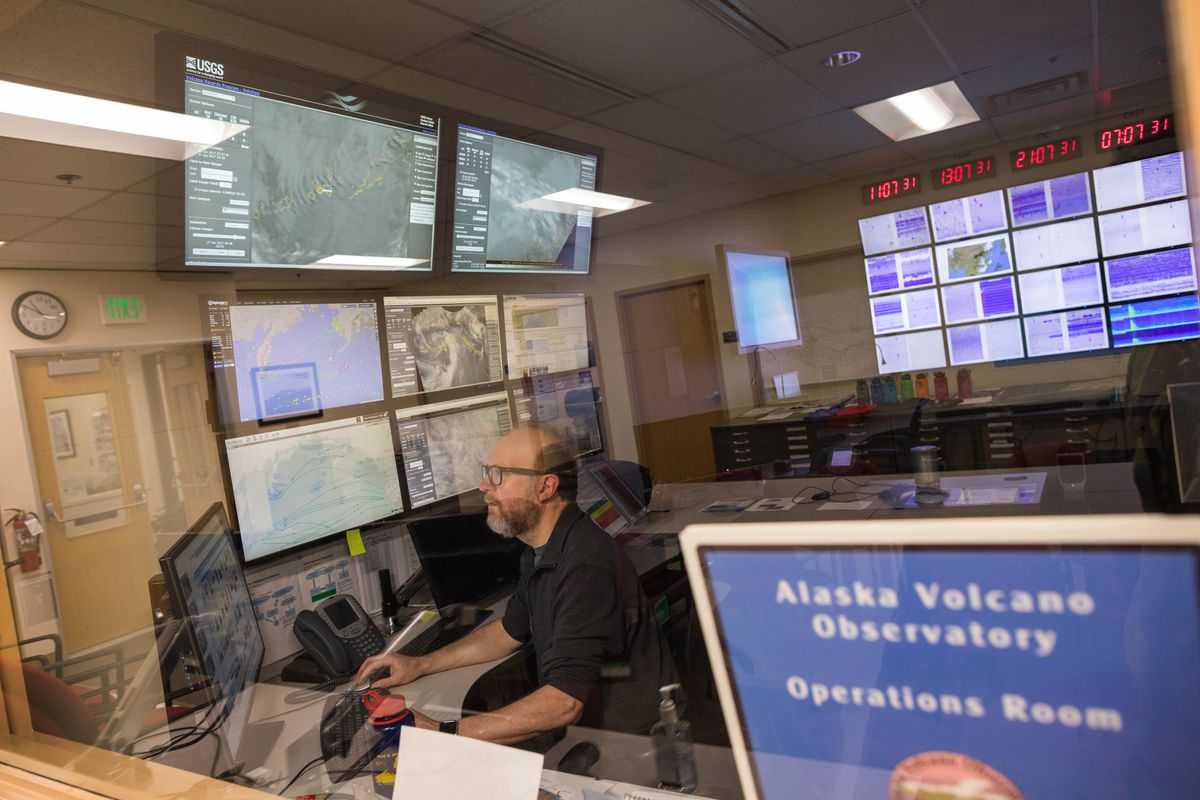 The news came at the bleary hour of  3:25 a.m., via a text message: Bogoslof. Erupting again.

Aaron Wech, a seismologist and the on-call Alaska Volcano Observatory scientist for this week in late June, had been asleep when the alert came in. The text message woke him up.

In these lively days for Alaska's volcanologists, no on-duty scientist can afford to sleep heavily: The staff of the observatory is baby-sitting a restless volcano.

Bogoslof is a tiny blip of land — black rock, lava — that barely rises above the surface of the Bering Sea, northwest of Unalaska Island. It is the above-sea tip of a much larger underwater volcano, an island being formed by a series of eruptions that have tripled its size just since December.

So far this year the volcano has erupted 58 times. The explosions come with no warning.

And while Bogoslof is tiny, the stakes are high.

The smallest, most remote volcanic eruption could have a devastating impact on air travel. Clouds of volcanic ash, even a small amount, can choke a jet engine and bring down an airplane.

Unlike other volcanoes, where eruptions are preceded by weeks or even months of telltale rumblings courtesy of monitoring equipment, Bogoslof is a mystery. None of the scientists at the center have set foot on the island in many years, and it is too small for monitoring equipment.

So by the time seismic alarms placed on Umnak and Unalaska islands go off, triggering text messages to scientists in Anchorage, the volcano is already erupting.

"We prefer to forecast," said Kristi Wallace, a geologist with the center. "With this one, we can't."

The people who work at the Alaska Volcano Observatory are decidedly not baby sitters.

They are highly trained research scientists, each with a different specialization — geology, geophysics, seismology — who study volcanoes.

But they are also responsible for warning the public about the considerable public safety hazards posed by a volcanic eruption. Someone is on-duty 24 hours a day, 365 days a year.

The observatory, established in 1988, is jointly run by the U.S. Geological Survey, the University of Alaska's Geophysical Institute and the state Division of Geological and Geophysical Surveys.

When the text message came in on the early morning of June 27, Wech followed a now-familiar routine.

First he checked to make sure it wasn't a false alarm. Then he started texting the rest of the volcano observatory's response team, as they worked to quickly figure out how serious the eruption had been and what kind of ash cloud it had generated. The first calls went to the National Weather Service and Federal Aviation Administration, so they would be able to quickly warn pilots. Other agencies — the U.S. Coast Guard, military bases — would also be notified.

Then staff released an advisory, changing the warning color code to red, as they had done dozens of times already this year.

Twenty-eight years ago, a volcano almost brought down a jet in the skies over Alaska.

For the scientists at the volcano observatory, the memory is still fresh: On Dec. 15, 1989, a KLM jetliner flying from Amsterdam to Tokyo with a stop-off in Anchorage flew into a cloud of volcanic ash from the erupting Mount Redoubt and lost power to all four of its engines. The Boeing 747 full of passengers was in freefall for 12 terrifying minutes, dropping from 25,000 feet to about 13,000 feet — more than 2 miles.

"It was dark. People were screaming, throwing up," one passenger told the Anchorage Daily News at the time. "It was like you can imagine. Pretty near panic."

The pilot was able to get the engines re-started and guided the plane in for a safe landing at the Anchorage airport. But the plane sustained $80 million in damage. The near crash made headlines around the world and changed the way governments viewed the risks posed by volcanic eruptions.

"That crystallized the idea that there are no remote volcanoes in the world," said Dave Schneider, a remote sensing geophysicist with the center.

Alaska's volcanoes may be in places so remote and inhospitable that few humans live where lava or a lahar mudflow could reach. But every day, hundreds of people fly over them.

On a Tuesday in early July, Schneider pointed out a monitor showing real-time air traffic crossing the long chain of volcanoes sprinkled from the Kamchatka Peninsula in Russia to Cook Inlet. Some of the planes, he could tell, were taking circuitous routes to avoid ash clouds from an erupting volcano in Kamchatka.

"This one is flying from Seoul to Anchorage," he said. "It's trying to avoid this forecast of ash. It wouldn't usually come this way."

Beyond studying volcanoes, the observatory also warns about ash fall on towns and boats and other, rarer potential fallouts from an eruption. Alaska's mix of many active volcanoes and status as an aviation crossroads for the world make warning pilots a major priority, said Wallace, the geologist with the center.

Bogoslof is so small and remote that the instruments used to detect signs of an eruption cannot be placed on the island itself, lest they be destroyed by eruptions. Also, the vent that the explosions come from is underwater. Scientists can't even see it.

"That causes all sorts of problems," Wallace said.

Instead, the volcanologists must rely on imperfect signals from monitoring equipment placed on islands 30 or 40 miles away — not the ideal scenario.

Of Alaska's 52 volcanoes considered "historically active," meaning they are known to have erupted at some point since 1760, the volcano observatory has installed seismic monitoring equipment on 30, from the far reaches of the Aleutian Islands to the cones that loom over Cook Inlet, including Mount Augustine and Mount Iliamna. The equipment picks up subtle signs that a volcano will erupt.

Cyrus Read, who works in geophysical design and maintenance for the observatory,  is charged with keeping up that network. It's an endless challenge. He spends three or four months a year traveling to the volcanoes. On one Tuesday in June, he was preparing for a trip to Chignik Bay, where he planned to visit Mount Veniaminof and Aniakchak Peak volcanoes and survey the damage he was sure local bears had inflicted on the monitoring equipment. On Alaska Peninsula volcanoes, bears are a constant threat.

"We know bears have probably eaten some antenna cables," he said with a shrug. "We've had some stations where I just had to move it — it became apparent the bears didn't want them there. We'd go every year and they'd have fully decimated it."

Lahars, or volcanic mudslides, destroyed a station on Mount Pavlof. A glacier has overtaken another station high on Mount Iliamna.

With no such possibility on Bogoslof, the best scientists can do is rely on the miles-away seismic equipment and another type of monitor that captures "infrasound" changes. But that has drawbacks too — in the Aleutian Islands, wind noise leads to a lot of false alarms.

Meanwhile, Bogoslof shows no signs of slowing down.

That leaves the Alaska Volcano Observatory with a relentlessly active volcano and no real way to predict an eruption. So for the time being, the scientists will keep waiting for the sound of an alarm to signal the next mysterious burble from under the sea.