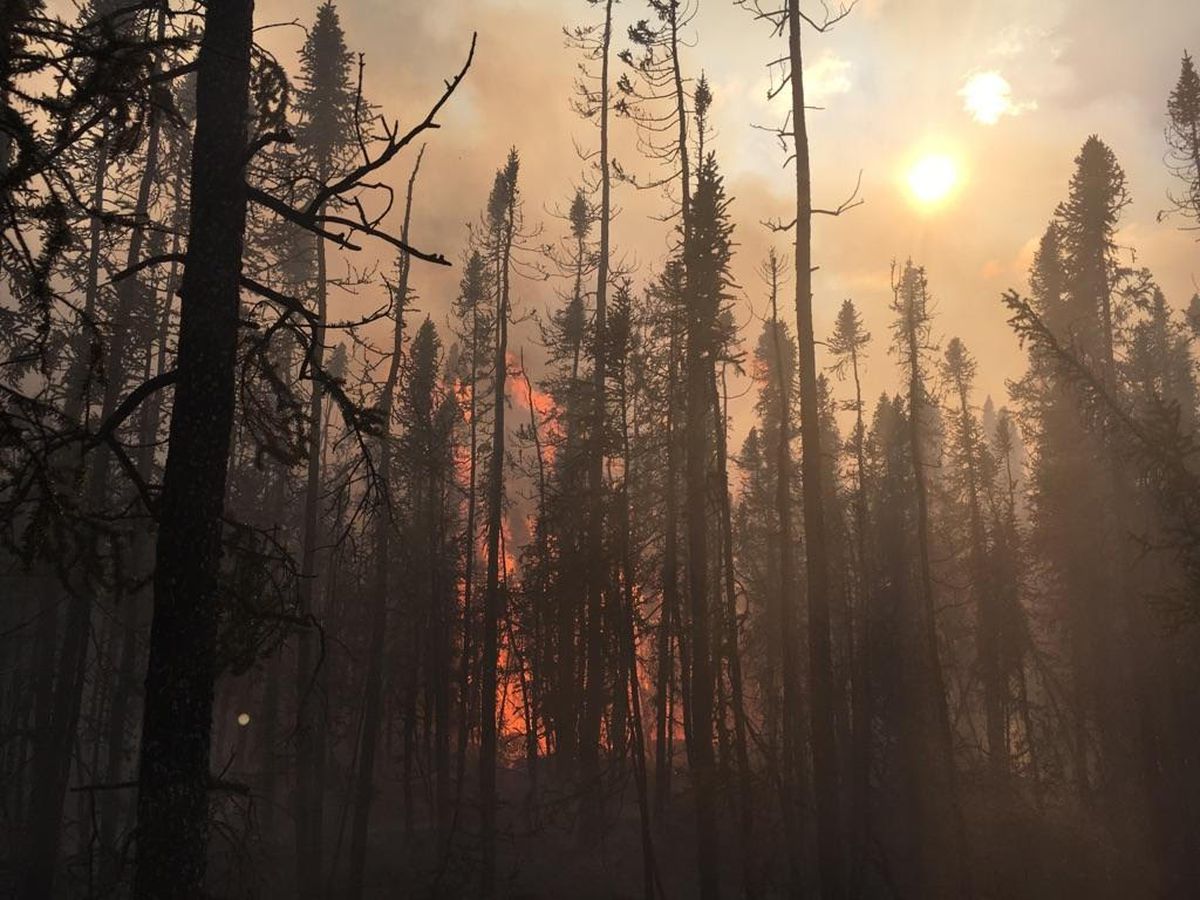 The Chistochina River Fire on Saturday, Aug. 5, 2017, as firefighters worked to put a containment line around the blaze. (Zack Horner / Alaska Division of Forestry)

The Chistochina River Fire on Saturday, Aug. 5, 2017, as firefighters worked to put a containment line around the blaze. (Zack Horner / Alaska Division of Forestry)

Alaska's solitary staffed wildfire northeast of Glennallen was contained Monday night, and the agencies tasked with battling blazes statewide continue to shuffle personnel in and out of state due to increased fire risk here and help needed in the Lower 48, officials said.

As of Tuesday, there are 369 people from Alaska assigned to fires in the Western United States, according to the Alaska Interagency Coordination Center.

As for other agencies, the Alaska Fire Service, part of the Bureau of Land Management, has 159 people assigned to fires in California, Colorado, Idaho, Montana, Nevada, Oregon, Utah and Washington. And the number of personnel assigned out of state from other agencies ranges between one and 15, according to the coordination center.

Moving forward in the wildfire season, the Alaska agencies have put an emphasis on keeping initial attack crews and smokejumpers in state, at least for the next couple of days.

Frequent lightning strikes were forecast for Tuesday, and areas like the Copper River Basin, the Yukon Flats and around Chicken remain hot and dry, officials said.

"We're holding some of those resources to check and see how that pans out," said Beth Ipsen, spokeswoman for Alaska Fire Service. "If there's any increased activity or any new fires, they'll be on it."

Division of Forestry spokesman Tim Mowry is working in California. Mowry said by phone that he's assigned to the Orleans Complex, a group of eight fires in the northern part of the state that has burned a total of about 4,500 acres. He said there are Alaskans assigned to some of those fires.

"It's very hot. I drove up to the fire the other day and my car thermometer showed 110 degrees," he said.

Elsewhere, the Chena and Pioneer Peak hotshot crews are battling the Powerline Fire in Idaho, a wildfire of more than 50,000 acres that has destroyed six buildings and prompted evacuations; while a crew from Yukon is on the ground in Oregon, working to contain the 5,500-acre Whitewater Fire.

Wildfire season is peaking in Western states while Alaska continues a relatively calm season of its own.

[About 150 firefighters sent Outside during Alaska's relatively quiet fire season]

On Monday the Chistochina River Fire was completely contained, leaving only cleanup duty at the state's sole staffed fire, near Mile 36.5 of the Tok Cutoff, Ipsen said.

There are 60 people assigned to the fire, Ipsen said. On Friday night, firefighters were able to keep the blaze from damaging or destroying four homes and threatening a nearby construction site about 100 yards away from its perimeter, she said. Since then, the fire hasn't grown from its 98 acres, she said.

Mowry said that the assignment of critical personnel is being decided on a case-by-case basis, and Ipsen agreed.

"We've been doing that for most of the summer. We evaluate it every day," she said.

Things are expected to calm moving into the weekend, with temperatures likely to fall through wide sections of Alaska, Ipsen said.

"It's that time of the summer where we have increased darkness, less daylight and less time for things to dry out. The recovery rate, or humidity, overnight is pretty high, so things definitely die down overnight."