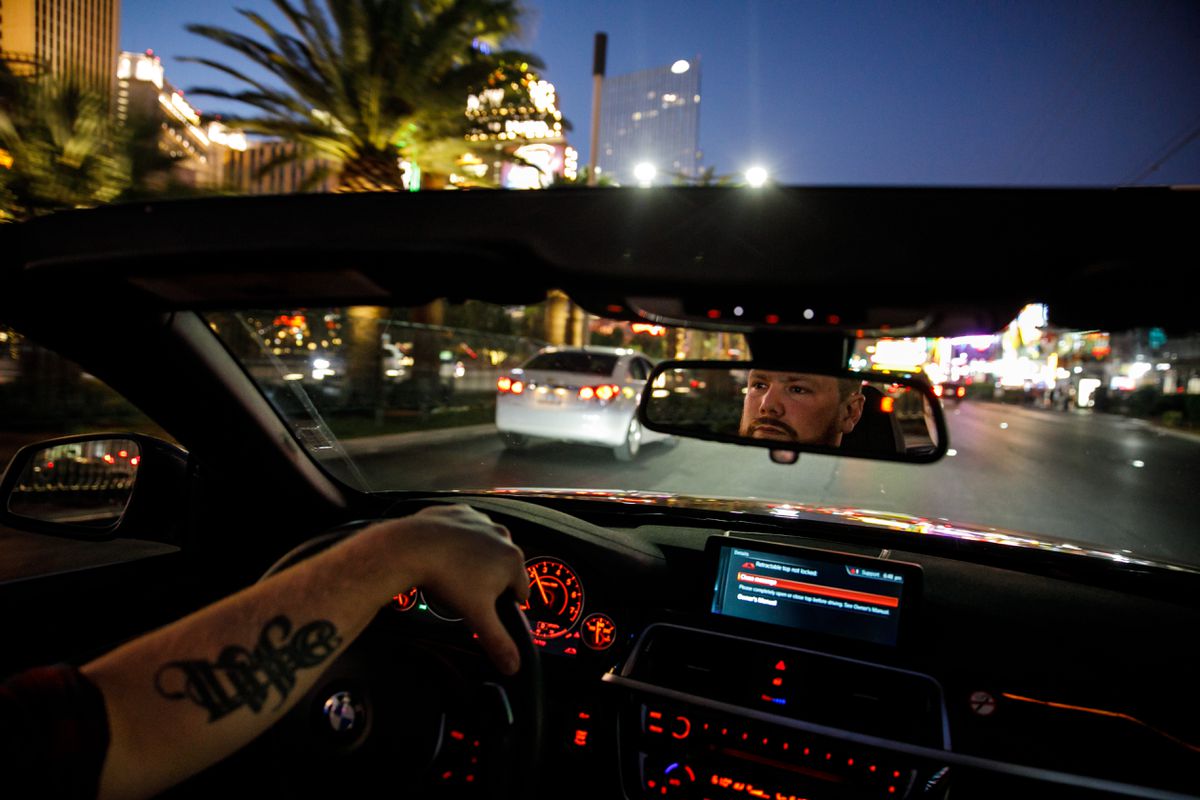 Brian MacKinnon drives a convertible BMW rented by his friend, Adrian Murfitt, who was killed in the October 1 mass shooting at the Route 91 Harvest Festival concert, in Las Vegas two days after he died in MacKinnon’s arms. (Marcus Yam/Los Angeles Times/TNS)

Brian MacKinnon drives a convertible BMW rented by his friend, Adrian Murfitt, who was killed in the October 1 mass shooting at the Route 91 Harvest Festival concert, in Las Vegas two days after he died in MacKinnon’s arms. (Marcus Yam/Los Angeles Times/TNS)

He strolled into an Anchorage western-wear store with money to spend, fresh off a record season fishing sockeye salmon on his friend's purse seiner.

The Alaska gray and drizzle was setting in and Adrian Murfitt couldn't wait for his trip to see some country music in the desert.

He needed just the right hat.

He was surprised to find his long-lost friend Donny Millions tending the cash register. As Murfitt shopped, they chatted for over an hour about old times playing hockey and football in the street.

They swapped numbers and planned to get together when Murfitt got back.

Murfitt left with a laugh and the vaguely goofy grin his friends loved.

They hadn't seen him this happy in years. He had finally worked through a long, painful breakup. He had lost 30 pounds on the fishing boat. He was lean and looking good, ready to see his favorite singer, Jason Aldean, in Vegas.
___

Avonna Murfitt worried about her son. When he split with his girlfriend of seven years, Christina Hoglin, the couple had to sell their house and divide up their four dogs. Adrian was broke and devastated. He could not find solace in snowboarding or rebuilding cars like he used to.

He trudged through spring, working at a friend's refrigeration repair company, drinking too much beer, putting on weight.

He spent the summer with his friend and captain, Sean Alexander, fishing off the capes of the Alaskan Peninsula. He thrived as deck boss, engineer, chef, the skiffman positioning the nets. The two fishermen had grown up in the same neighborhood and roomed together in college in Washington.

The three months at sea with Alexander seemed to wash all that gloom away.

Murfitt came home and was back to his old teasing self. He now had money and a plan.

He and Alexander were going to buy another seiner for Murfitt to captain.

But he had things to take care of first. He paid off a credit card that he and his mom owed money on. He bought car parts and fixed her Yukon and his truck, to give to his nephew. And he was planning his trip.

He rented a room at the Luxor and a BMW convertible to cruise the strip. He just needed to get his friend Brian MacKinnon on board.

On Thursday, Sept. 24, six days before his Vegas trip, he went to Eddie's Sports Bar on Old Seward Highway. It was line-dancing night.

Murfitt, 35, had a tight group of buddies from South Anchorage who, naturally, called him "Murf."

They were North Slope roughnecks, crab, fishermen, mechanics and construction workers, all local boys. None of them were as enthusiastic about country music as he was. They ribbed him about his hats, but his enthusiasm — and his coy way of guilting them to join in — usually pulled them along.

"Don't make me go alone," he'd say with his smile.

So half a dozen of them came to line dance, drink beer and shoot pool.

Murfitt got the bug for country music from his mother, and it stuck hard. "He used to sing in the shower, and you could have made a record out of it," Avonna said. "He sounded like Alan Jackson."

On rap nights at another bar, he'd ask the DJ to play Jason Aldean to needle his friends.

At Eddie's that night, Murfitt buttonholed MacKinnon and made his pitch about Vegas.

"Come on, I'll pay for it," Murfitt said. He pulled up his phone to look for tickets from Anchorage to Las Vegas.

MacKinnon excused himself to the bathroom.

Murfitt knew that MacKinnon, of all his friends, needed this trip. He drove dump trucks seasonally and was an inventor and founder of a company that sold tough aluminum personal watercraft for fishermen, hunters and rescuers to explore Alaskan wilds. He shared custody of his two girls, ages 6 and 8, whom Murfitt treated like nieces.

But in recent years, several of MacKinnon's friends had died of drug overdoses, suicide, alcohol poisoning. MacKinnon was in the room when one of them passed.

"Bought 'em" Murf said when he came back.

Alexander met them in Las Vegas and the three played tourist, hitting bars and restaurants, cruising the strip in the convertible, checking out the bands at the Route 91 Harvest Festival.

The first night they went to a Brazilian steakhouse and marveled at how much beef they could get for the price. They ate too much, went back to the room and passed out. They went back the next night, but kept their eating under control so they could stay out late.

MacKinnon and Murfitt, both tall and broad-shouldered, stood out in a crowd. Seeing Murfitt's hat, people stopped to pose next to him for selfies, as if he were a real Wild West cowboy.

Murfitt had a childlike way of complimenting a woman without being creepy.

"I like your glitter," he said to one sparkly cheeked woman standing next to him at the Eric Church concert.

She thanked him and offered him a shot of Tito's vodka she had smuggled in as water. As she later recounted on Facebook:

"He had lost his friends … and I was hanging solo, so we buddied up for a bit … and he was excited to be in Vegas for Route 91 and he liked my red hair. He was friendly and nice, and all smiles."

"At one point, Adrian placed his cowboy hat on my head, and I decided to take a Snapchat of the moment."

"What do you want for your birthday, Mom?" she remembered Adrian asking.

She was turning 70 in a few weeks. She told him to save his money. She just wanted one of his "mechanic certificates" for free maintenance.

On the festival grounds, he stumbled into his ex-girlfriend Hoglin, among the thousands.

"Because you're my angel. I'll always be able to find you."

They talked, even brought up the idea of getting back together, according to Murfitt's mother, who heard about the exchange from Hoglin.

As Aldean was ready to perform, MacKinnon pulled his friend away. Murfitt said they should push up to the front.

Their size made it difficult, but they got near the right-center of the stage, Murfitt behind MacKinnon. Aldean was singing "When She Says Baby."

Murfitt wanted to take a selfie when what sounded like a string of firecrackers distracted them.

"That's one way to clear the crowd to get up front," someone joked.

When a second round of cracks hit, MacKinnon just wanted him to take the picture so he could watch the concert.

Murfitt turned toward the cracking sound and fell, just as something ricocheting off the ground knocked MacKinnon's hat off his head.

He looked down at his friend and saw blood and a gaping hole in his throat.

He crouched over him, in shock. Murfitt didn't speak. He just looked straight at him, MacKinnon said, with a confused expression.

MacKinnon looked around the crowd, figuring someone nearby was firing.

An off-duty firefighter started to help; he tried to open Murfitt's mouth to clear his airway.

Bullets kept snapping off the pavement, thudding into flesh. The constant report of a rifle in the Mandalay Bay tower slowly made the situation clear.

"I'm a doctor, I'm a doctor," a man said. The doctor and firefighter started to give Murfitt CPR.

Murfitt started turning blue in his face. He just kept looking up at MacKinnon.

"I got hit," the doctor said. A bullet had struck him in the leg. The crowd was screaming and running by now. He left with them.

The firefighter stayed a few more moments, then turned to MacKinnon.

He ran to help someone else. The people cleared around the two.

Murfitt took his last gulps of air, all the time looking at MacKinnon.

Then he stopped breathing.

"No, he's not!" MacKinnon shouted.

Gunfire rained down close to him from the Mandalay, and he ran for cover not far away behind some railing.

He could see his friend lying alone out there. He couldn't take it. He was overcome with anger.

He ran back to Murfitt, sat cross-legged next to him, and picked up the Stetson and put it on himself. He rested his hand on his friend's chest and cried.

People were running around tending to the wounded — police, fire, military, nurses carrying the injured out on pieces of gates even as the gunfire continued.

They told MacKinnon he had to leave. "I'm not leaving!" he said.

A paramedic came up to him and said, "Do you have kids?"

He saw the faces of his girls, Miley and Carmen.

"Let me take you to your kids," she said.

He snapped out of his state of shock and walked with her. He got behind a barricade and waited until the shooting finally stopped. But no one would let him go back to see Murfitt.

"I can't see any more dead people," a cop told him.

MacKinnon walked over by the Tropicana, aimless. He got pushed into a scrum of people hiding in the basement. They did not know what was happening. He was covered in blood. He kept himself from sobbing. He got to a bathroom and let his grief roll over him. He cried for five minutes.

He made his way back to the Luxor and charged his phone. Murfitt's bed looked like he had just climbed out of it. His cologne was in the air. MacKinnon glanced at the box that had held the Stetson Murfitt had bought at the Silva Saddle.

When MacKinnon turned his phone on, he saw calls missed from Alaska. Dozens of people's lives were going to fall apart when he talked to them.
___

Murfitt's body eventually made it to the coroner.

His family in Anchorage has been trying to get it released. Alaska Airlines has offered to fly his remains home at no charge.

MacKinnon is waiting in the room Murfitt rented, grieving, unwilling to leave until he gets on the plane with his friend.