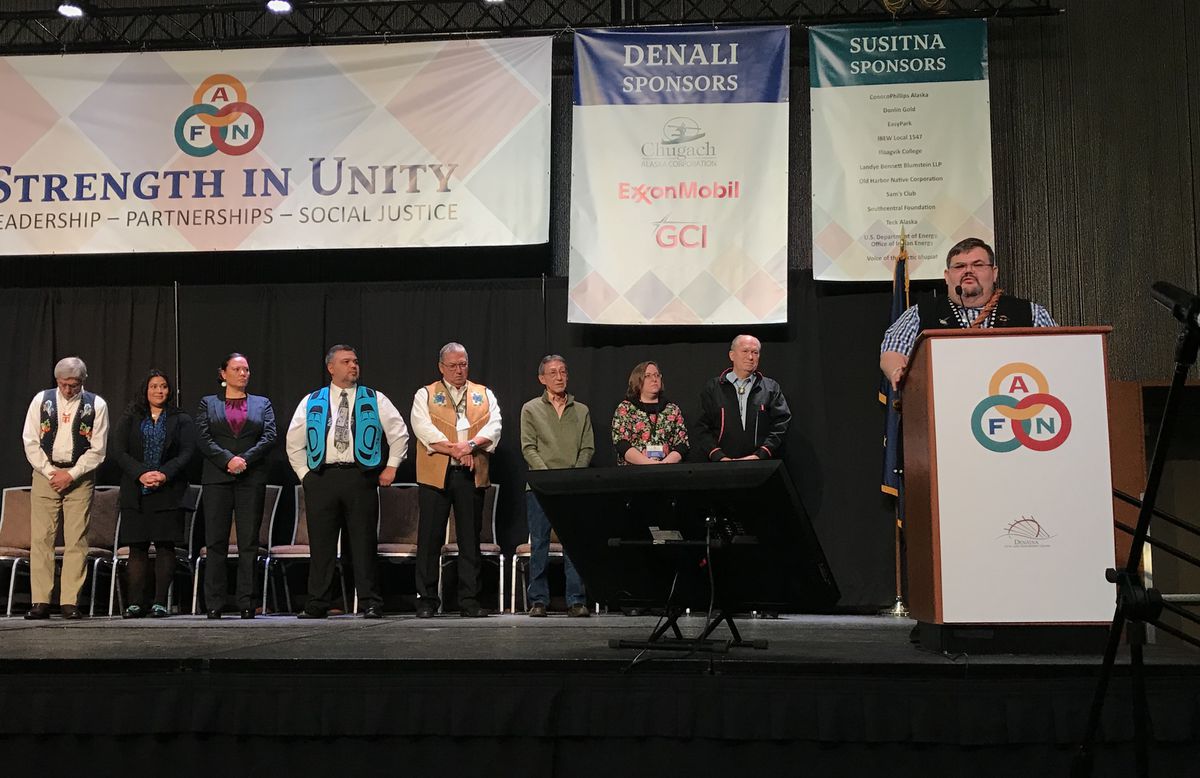 Richard Peterson, president of Tlingit and Haida Central Council, a regional tribal organization, addresses the Alaska Federation of Natives convention Friday in his role as chairman of the Governor’s Tribal Advisory Council. Other members are on stage along with Lt. Gov. Byron Mallott and Gov. Bill Walker. (Lisa Demer / Alaska Dispatch News)

Richard Peterson, president of Tlingit and Haida Central Council, a regional tribal organization, addresses the Alaska Federation of Natives convention Friday in his role as chairman of the Governor’s Tribal Advisory Council. Other members are on stage along with Lt. Gov. Byron Mallott and Gov. Bill Walker. (Lisa Demer / Alaska Dispatch News)

In a new legal document, Alaska's attorney general says there's no doubt that Alaska's 229 tribes have governmental powers – sovereign powers — over a range of matters that directly affect their people.

Gov. Bill Walker had asked for guidance about the sovereignty of tribes and their relationship with the state, she said.

"The law is clear. There are 229 Alaska Tribes and they are separate sovereigns with inherent sovereignty and subject matter jurisdiction over certain matters," the opinion concludes.

At its heart, the attorney general said, tribal sovereignty is the right to make one's own laws and be governed by them.

Only one Alaska tribe has a reservation, Metlakatla Indian Community in Southeast Alaska. But the lack of a land base doesn't mean that other Alaska tribes don't have authority to rule – though it's not a blanket authority, the attorney general opinion says.

"Indian country is not a prerequisite for … jurisdiction, but it may impact the extent of that jurisdiction," the opinion says.

This isn't the first time a state administration has recognized tribes. Two Alaska governors formally did so through signed orders, Steve Cowper in a limited way in 1990 and Tony Knowles more broadly in 2000, midway through his second term.

But other governors have fought tribal authority. And Walker, back in 2015, decided to appeal a court ruling that had the potential to create Indian country in large areas of Alaska, with concerns that a patchwork of differing legal and regulatory authorities could emerge. The case was made moot when the Obama administration's Interior Department agreed to quit fighting the matter and sided with Alaska tribes. Interior said their lands could be taken into trust by the federal government, a step toward Indian country.

The attorney general's opinion is significant because it establishes the position of the Walker administration, said Lloyd Miller, an Anchorage attorney who is a partner in a tribal law firm.

Walker told the Alaska Federation of Natives convention this week that he worked to strengthen the relationship by creating an 11-member Governor's Tribal Advisory Council – G-TAC for short. It came about after a three-day visit in 2015 to five rural communities. He wanted to keep the dialogue going, he said. The group sets priorities and looks for common ground on issues, he said.

He directed every member of his Cabinet to take racial equity training led by The First Alaskans Institute.

Lt. Gov. Bryon Mallott, a Tlingit from Yakutat, told an AFN tribal leaders meeting this week that substantial progress has been made. Early in the Walker administration, when one in a series of recent tribal banishments got attention, a senior legal official told him: "Those tribes can't banish people. Why, they're just like the Kiwanis Club in terms of their jurisdiction and their role."

That might not be a widely held view, Mallott said. "But it was and, I suspect to some degree still, is a view."

Lindemuth's opinion doesn't address banishment directly. But in an interview, she said tribal banishments raise constitutional questions that only a court case can resolve. None of the recent banishments have yet been challenged in court.

Just this week, Walker and his health commissioner, Bethel tribal member Valerie Davidson, signed a first-of-its-kind agreement with 17 tribes to allow them to begin taking over child protection services.

That was a big step, said Richard Peterson, president of Central Council of Tlingit and Haida Indian Tribes of Alaska and chairman of the Governor's Tribal Advisory Council.

"Tribes haven't exactly been recognized by the state of Alaska," he told the Alaska Federation of Natives convention on Friday.

The group let Walker know that was problematic in areas such as public safety, he told AFN.

Then Lindemuth tackled the issue. The attorney general examined a series of court rulings about Alaska tribes and Indian country.

And her opinion said: "tribes do exist in Alaska," Peterson told the convention crowd in the Dena'ina center. The crowd started clapping then and after every new element that Peterson shared, about the right to decide matters such as child custody and adoption.

Tribes can decide who their member are and govern them, to a degree, the opinion said. They can authorize tribal organizations to enter into agreements with other governments to handle certain education programs, child protection, law enforcement and land management, the opinion said.

The opinion doesn't describe all the limits on sovereignty but notes that even in the Lower 48 on reservations, the federal government handles major felony crimes.

"I don't know if the gravity really is hitting everybody but we've been arguing for recognition since statehood," Peterson said.

Sovereignty is inherent, not given, he said, but "it sure helps if it is recognized by our partner in the state of Alaska."

He asked the AFN crowd for more, and people stood, applauding for Walker and Mallott.

"This isn't the perfect answer," Peterson said, "but I can tell you it's really monumental steps forward."