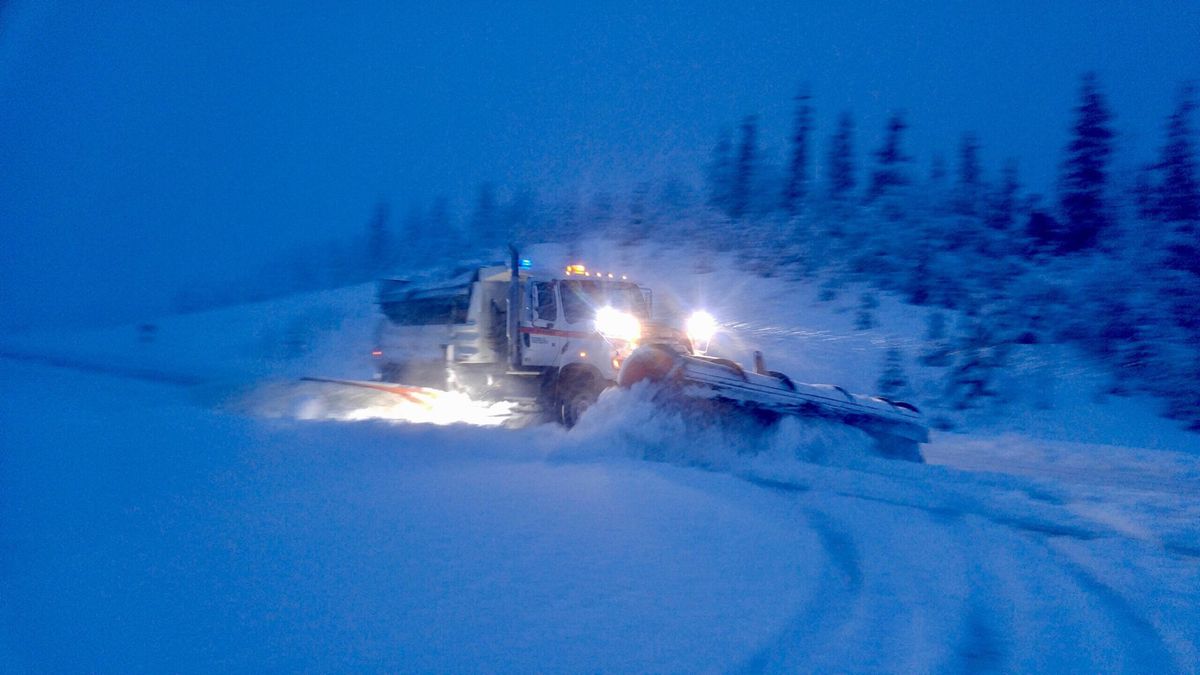 State crews were plowing the roads Wednesday after a storm dumped snow on Valdez.(Alaska Department of Transportation and Public Facilities)

State crews were plowing the roads Wednesday after a storm dumped snow on Valdez.(Alaska Department of Transportation and Public Facilities)

A storm swept through parts of Southcentral Alaska overnight, dumping more than 40 inches of snow on Thompson Pass and triggering an avalanche that has shut down the highway to Valdez.

The Richardson Highway was closed from Mile 12 to 42 on Wednesday, said Meadow Bailey, spokeswoman for the Alaska Department of Transportation and Public Facilities.

The highway is the only road out of Valdez, a city of about 4,000 people tucked between the Chugach Mountains and Prince William Sound.

An avalanche that happened around 3:30 a.m. at Mile 39 in Thompson Pass had crossed the road, Bailey said. Crews were waiting for the weather to improve before heading in to clear it.

The avalanche was 20 feet deep and 200 feet long, Bailey said. It was estimated to take about five hours to clear, but "depending on conditions, it could be a couple days before we get there," Bailey said.

More than 40 inches of snow had fallen in Thompson Pass overnight, said Kyle Van Peursem, meteorologist with the National Weather Service office in Anchorage. On Wednesday morning, 15 inches had fallen in just 90 minutes, he said.

More heavy snowfall was forecast for Thursday and Friday, with 20 to 30 inches of additional snow expected in Thompson Pass. Areas of lower elevation, including Valdez, would likely get 2 or 3 inches of rain, the National Weather Service said in a winter weather advisory.

In Valdez on Wednesday, 12 inches of snow had piled up through the morning, Van Peursem said.

A mix of heavy snow and rain in the Copper River Basin and Valdez had created "very difficult and hazardous driving conditions on the Richardson, Edgerton, Glenn and Tok Cutoff highways," Bailey said in a written statement.

Sean Holland, who lives in Eagle River, was in Valdez on Wednesday. "We are all watching the pass closure and progress on the avalanche," Holland wrote in a Facebook message.

"Road plow crews down here are awesome! Roads are plowed every day and travel inside Valdez is great! Snow machine riders are all sorts of excited! All in all, every one is up beat, enjoying Snowmigeddin and ready for the holidays!" Holland wrote.

Holland was planning to drive out of Valdez on Monday, but he wasn't worried. "I was born and raised in Wyoming. The law of the land is 4 wheel drive!" Holland wrote.

Thompson Pass is occasionally shut down due to avalanches. In 2014, two giant avalanches closed the road, one of which created a snow dam and backed up the Lowe River, complicating efforts to clear the highway of the massive avalanche debris.