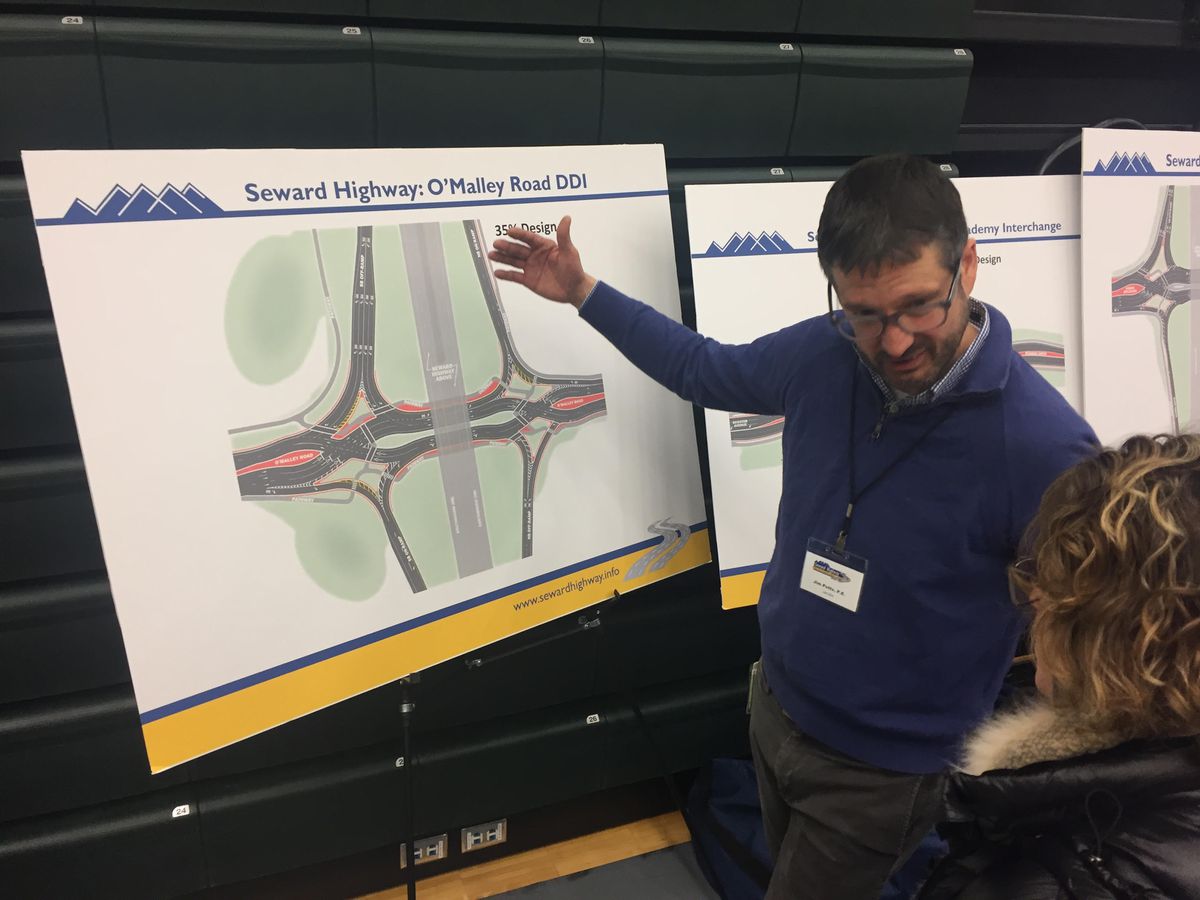 Jim Potts, project manager with CH2MHill, shows a transportation fair visitor the planned “diverging diamond” design for the entrance and exit from the Seward Highway to O’Malley Road on Thursday, Feb. 8, 2018. (Devin Kelly/ADN)

Jim Potts, project manager with CH2MHill, shows a transportation fair visitor the planned “diverging diamond” design for the entrance and exit from the Seward Highway to O’Malley Road on Thursday, Feb. 8, 2018. (Devin Kelly/ADN)

The roomful of booths at the Alaska Airlines Center spotlighted several dozen projects, ranging from the straightforward (resurfacing on the Glenn Highway) to the hugely complex and hypothetical (a light rail connection between Anchorage and the Mat-Su).

For anyone who drives, bikes or walks in the Anchorage region, here are a few short-term projects to keep an eye on.

(Note on the price tags: The money for these projects comes almost entirely from the federal government).

1. A new kind of interchange design headed for the Dimond, O'Malley exits on the Seward Highway

Forget roundabouts. To grease the flow of traffic merging into Anchorage's busiest highways, transit planners are now all about a crisscrossing set of ramps called the "diverging diamond."

In this confounding-looking design, cars go through the intersection without ever making a left turn. It appears to ferry cars to the left side of the roadway. Pioneered in France, the design has become more popular in the United States.

There's already one in Anchorage, where Muldoon Road passes over the Glenn Highway in Northeast Anchorage. State officials blitzed the public in 2016 with videos about how it worked.

Now there are plans to build two more. Officials have turned to the Seward Highway, and the exits for Dimond Boulevard and O'Malley Road.

The design is cheaper than other options, but is expected to cut down sharply on congestion and crashes, according to Sean Baski, project manager. Upgrading the interchanges is part of a broader facelift for the Seward Highway south of 36th Avenue.

The "diverging diamond" might be considered for the Dowling Road exit off the highway, too. Tell the state what you think.

A three-lane, one-way street runs in front of Bean's Cafe and Brother Francis Shelter on East Third Avenue, trafficked constantly by cars and pedestrians. Cars have collided regularly with walkers there over the years.

Now the city is thinking about converting one lane of traffic into a sidewalk, said Glenda Radvansky, a designer with the city project management and engineering department.

Radvansky said the project is still in its infancy. She said engineers have been discussing ideas with police officials to make the area safer.

Road upgrades would be just one piece of a broader city effort to alter a chaotic environment around Bean's Cafe and the Brother Francis Shelter, through physical changes and new management approaches. In another example of a planned physical change, the city hopes to build a fenced perimeter around the shelter and soup kitchen in the coming months.

3. Overhaul of the Glenn Highway through Palmer

A reconstruction project will add lanes on the Glenn Highway starting at the point where the highway splits off toward Palmer.

The state wants to turn the stretch into a four-lane divided highway. It's currently a two-lane road prone to collisions and backed-up traffic.

Construction may start as soon as this fall in Palmer, working south to Inner Springer Loop.

4. More passing lanes on the the Seward Highway south of Girdwood

South of Girdwood on the Seward Highway, the state is on track to start building new passing lanes and straightening out curves. This section of highway has one of the highest crash rates in the state and has been slated for upgrades since the 2000s.

[Scenic but crash-prone stretch of Seward Highway inches toward upgrades]

Plans also call for new bridges over the creeks that flow under the road and into Cook Inlet.

The first phase, from Milepost 75 to 77.7 and Milepost 81 to 90, is on track to start this summer. There may be some traffic delays, but the highway won't close entirely during the construction, officials said.

5. Midtown street to get upgrades for bikers, walkers

A Midtown thoroughfare with narrow, intermittent sidewalks, no bike lanes and a history of congestion and collisions is likely to get a facelift in the next few years.

West 32nd Avenue, Calais Drive and East 33rd Avenue extend east from Arctic Boulevard through residential neighborhoods, past the Walmart shopping complex and up to the Moose's Tooth restaurant and the Seward Highway.

Draft plans call for a mix of new bike lanes, pathways and landscaping. The city planning and zoning commission will hold a hearing on the proposals on March 12.

It's one of a number of projects aimed at relieving Midtown traffic congestion and making it safer for bikers and walkers.

Side note: A drone has helped with the survey work for this project. CRW Engineering, the contractor, bought a drone a year and half ago. It saves a lot of time and money, said Anthony Robinson, a land surveyor and licensed drone operator with CRW.

Want to help keep an eye on Anchorage trails this summer? Sign up for Trail Watch: www.muni.org/trailwatch, or 907-343-4355