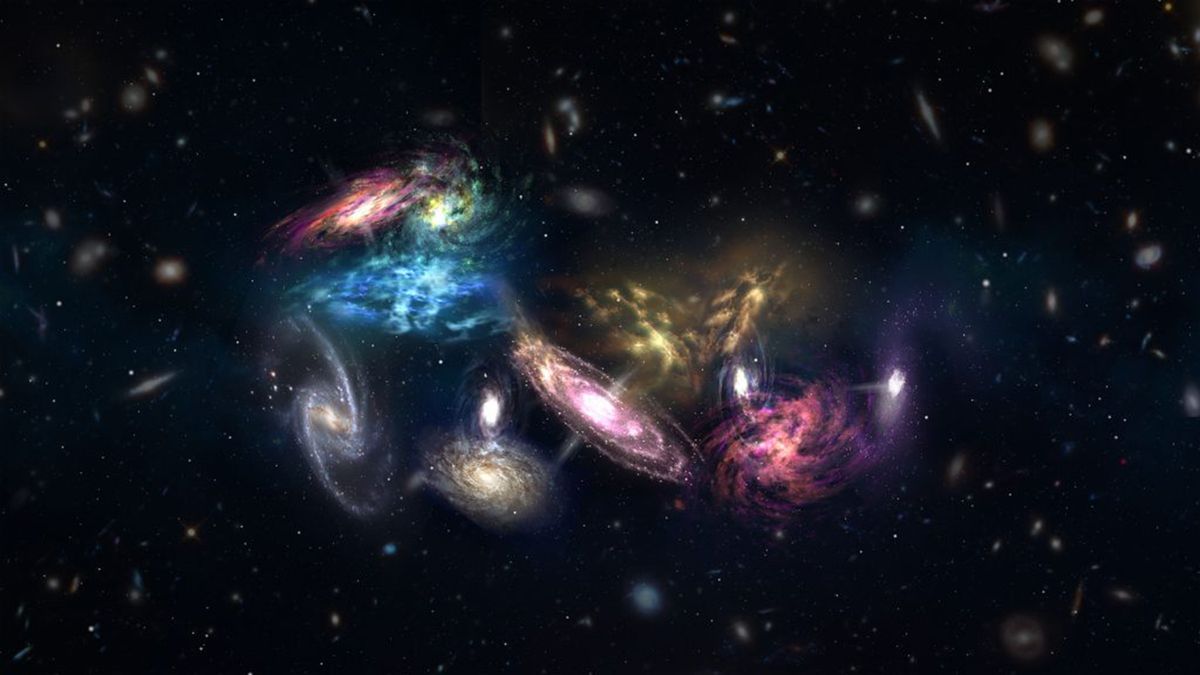 An artist’s impression of 14 galaxies that are in the process of merging. Eventually, they will form the core of a massive galaxy cluster. (ALMA Observatory, National Science Foundation, NSF Math & Phys Sci and nature)

An artist’s impression of 14 galaxies that are in the process of merging. Eventually, they will form the core of a massive galaxy cluster. (ALMA Observatory, National Science Foundation, NSF Math & Phys Sci and nature)

It's a cosmic pileup in the far reaches of the universe and nothing like it has ever been seen before.

Using the most powerful telescopes on Earth, astronomers have spotted 14 burning-hot galaxies hurtling toward each other on an inevitable galactic collision course at the edge of the observable universe.

Computer models show that when these galaxies do collide they will form the core of a colossal galaxy cluster so large it will be the most massive structure known in the cosmos.

This chaotic, energy-filled region, described Wednesday in Nature, is called a protocluster, and researchers say it is more active than any other section of the universe they have ever observed.

"There are huge energetics involved, like 10,000 supernova going off at a time, quite literally," said Scott Chapman, a physicist at Dalhousie University in Halifax, Canada, who worked on the study.

As if all that wasn't crazy enough, the authors said that the 14 galaxies are known as "starburst galaxies," which means they are forming stars at a furious rate.

The research team estimates that they could be making stars as much as 1,000 times faster than the Milky Way.

And they are all crammed into a space just three times the size of our own galaxy.

In addition, the whole system is located 90 percent of the way to the edge of the observable universe.

It is so far away that it takes light 12.4 billion years to travel across space from the protocluster to telescopes on Earth.

That means that this glowing star-generator formed just 1.4 billion years after the universe itself came into being.

And it's that fact in particular that has astrophysicists scratching their heads.

Nothing that big and active should have been able to form so long ago, he said.

"We see the structure of the universe building up slowly from little bits, and then merging together to make bigger bits. We don't expect bigger galaxies to form until much later," he said.

The earliest hint that something strange was going on in this part of the sky came in 2010 from data collected by the South Pole Telescope in Antarctica.

Although this instrument was designed to find relatively nearby galaxy clusters, astronomers realized it could also be used to spot extremely bright structures from a great distance away in both space and time.

The protocluster described in the new work showed up as a small but unusual smudge of light.

Still, astronomers found it compelling enough to request time on the ALMA telescope in the Chilean desert to take a closer look at its structure.

Observations made with ALMA revealed that the center of the smudge was actually 14 distinct galaxies and that the protocluster was a whopping 12.4 billion light-years from Earth.
Chapman said that was one of the big "wow" moments.

"If it had been much closer it would still be the busiest place in the universe that we know of, but it would be less shocking," he said.

ALMA is great at zooming in and seeing details of objects, but it has a very narrow field of view, Chapman said. It could only see the center of the smudge that the South Pole Telescope detected.

The authors estimate that there could be 1,000 more galaxies in the surrounding region of space.

"Most of them will be too faint to see, even with ALMA, but we can probably find another 50 galaxies," Chapman said.

The team has already started looking. Chapman said new observations are coming in even now.

"This really launched a massive study," he said.

In the meantime, astronomers will be busy puzzling over how such a large structure could form so early in the universe.

"People are very resourceful at coming up with answers, after the fact," Chapman said.