Interior Alaska wildfire expected to be contained by Saturday evening 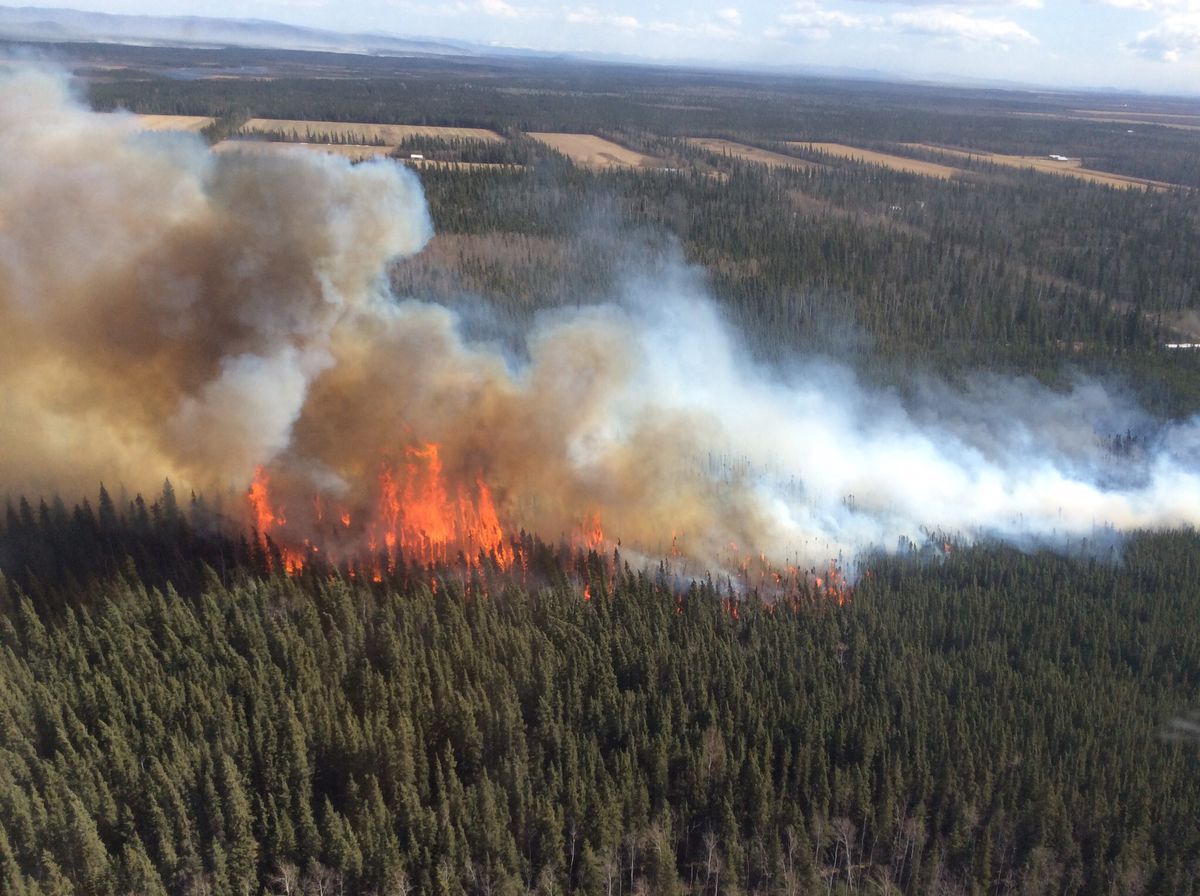 The North Eielson Fire burns through a stand of black spruce trees on Friday near Delta Junction. The fire burned approximately 250 acres of farm fields and timber before being brought under control. (Laona DeWilde/Alaska Division of Forestry)

The North Eielson Fire burns through a stand of black spruce trees on Friday near Delta Junction. The fire burned approximately 250 acres of farm fields and timber before being brought under control. (Laona DeWilde/Alaska Division of Forestry)

A wildfire near Delta Junction in Alaska's Interior burned an estimated 250 acres before it was brought under control, and it was expected to be contained by about 10 p.m. Saturday, a forestry division spokesman said.

The North Eielson Fire was reported at about 1:15 p.m. Friday. On Saturday, a crew of about 80 people were on the scene, checking the fire's perimeter and looking for hot spots, said Tim Mowry, spokesman for the Alaska Department of Natural Resources Division of Forestry.

Most of the burned area was grass and farm fields, he said, and no homes were damaged.

"Right now, they're pretty much mopping up the fire," Mowry said around 11:30 a.m. Saturday. The area covered by the fire was about 2 1/2 to 3 miles long, he said. "They're expecting to have it fully contained by the end of shift today. … We're not real concerned about it moving anywhere."

The cause of the fire was originally thought to be a tree falling on a power line, Mowry said. But on further review, he said, there "aren't really any power lines in the area" and the fire is now under investigation.

"It's obviously human-caused," he said.

The fire started in a forested area, spread to nearby grass, and then "across three farm fields before running into a stand of black spruce and mixed hardwoods not far from multiple residences on Tanana Loop Extension," according to a blog post from the forestry division. The fire slowed once it hit the trees.

On Friday, the fire was thought to be about 30 acres. That estimate was revised after the blaze calmed down.

"I think it was just more of getting better eyes on it," Mowry said.

The Delta Junction wildfire is the first significant blaze of the season in Alaska.

"It's really indicative of how dry things can be in this pre-green-up stage," Mowry said. "Even though the snow just melted up here, it doesn't take long for things to dry out."

Also Friday, the forestry division and local fire departments "responded to multiple reports of trees falling on power lines and starting grass fires," with three reports in Fairbanks and one in Tok, according to another blog post from the division. Those fires were contained and put out.

"It was windy, we had a lot of trees come down on power lines," Mowry said.

The wildfire near Delta Junction was the only one of those that spread.