Rocket launches and allegations of government waste: The hidden story behind that Glenn Highway bridge wreck 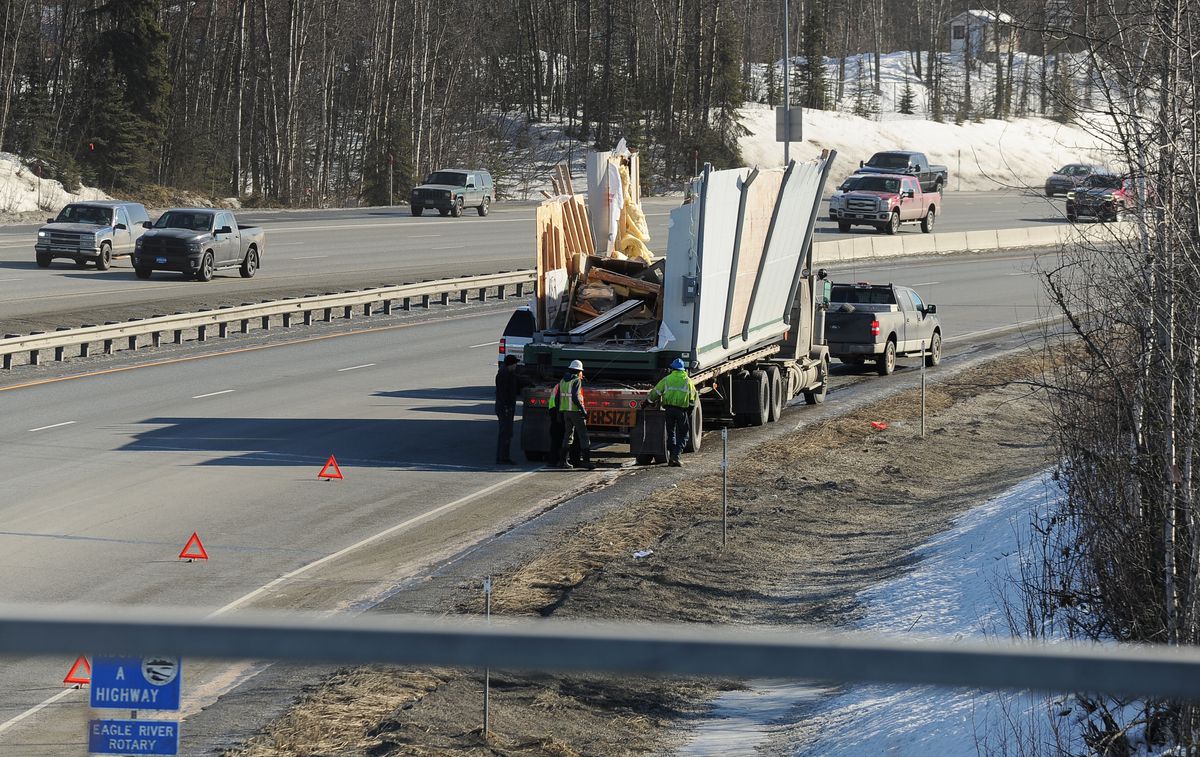 The top and back wall of a modular ATCO style unit being transported on a trailer was sheared off after it struck the South Eagle River overpass on the Glenn Highway in Eagle River, Alaska on Wednesday, March 21, 2018. (Bob Hallinen / ADN)

The top and back wall of a modular ATCO style unit being transported on a trailer was sheared off after it struck the South Eagle River overpass on the Glenn Highway in Eagle River, Alaska on Wednesday, March 21, 2018. (Bob Hallinen / ADN)

Remember when that tractor-trailer hauling part of a building crashed into an Eagle River overpass? And how it quickly produced an epic Glenn Highway traffic jam and snarled traffic for Anchorage commuters for days?

Turns out there's much more to the story, with strands that connect to a state-owned rocket-launching complex and accusations of government waste and improprieties in awarding a contract. Here's how:

— The truck, when it hit the overpass, was hauling a load destined to become temporary housing nearly 300 miles away at the Kodiak Island rocket complex.

— The winning $11 million proposal to build and tear down that island housing has become the subject of a months-long dispute between a company that lost out on the work and the state-owned Alaska Aerospace Corp., which runs the complex.

— The head of the losing company, which had offered to do the job for $3.5 million less, asserts that the selection process was flawed and wasted public money. The aerospace corporation, he says, picked a more expensive proposal that awarded some of the work to a company linked to a former aerospace corporation executive. That former executive was one of three people who helped the corporation judge the bids.

Officials at the aerospace corporation say Karl's bid was rejected for the simple reason that it failed to meet their specifications.

The corporation's request for proposals asked bidders to provide everything needed to "assemble, operate and dismantle" the temporary housing.

Karl's proposal included building the housing. But rather than dismantle it, the housing would have stayed in place on private land, for future use, at no cost to the government.

The competing proposal from PRL Logistics, the one chosen by the government, includes $2.2 million to tear down the temporary housing after it's used. For the next big test, the housing may have to be built all over again.

Campbell said he understands if that sounds inefficient.

But the requirement to dismantle the housing didn't come from his agency, Campbell said. Instead, it came from the federal Missile Defense Agency, which is using the rocket launch complex for testing and asked for the housing.

"Philosophically I understand why the taxpayer — and I'm one, too — would prefer to have it only built once," Campbell said in a phone interview. But, he added: "The MDA establishes requirements."

The aerospace corporation is owned by the state and runs the Pacific Spaceport Complex-Alaska, at Narrow Cape near Kodiak's eastern tip. It works with both commercial launch companies and government entities, including the Missile Defense Agency.

The agency has a five-year contract with the aerospace corporation, and it needs to house as many as 210 people near the complex for this year's launch, according to Campbell and the corporation's request for proposals.

The details of the launch are secret, Campbell said.

But a Missile Defense Agency environmental assessment says it's using the complex to test the agency's ability to intercept incoming missiles. The Kodiak site is part of the United States' strategy for knocking down potential attacks from North Korea and other potentially hostile nations.

A year ago, a missile launched from the complex successfully shot down another, incoming test missile that had been launched by a U.S. Air Force plane north of Hawaii.

The aerospace corporation issued an initial request for housing proposals last summer. But it then canceled and reissued it, at the Missile Defense Agency's request, Campbell said.

Both PRL and Karl's company entered bids the first time, with PRL's proposal coming in lower.

Karl's company already owns a 58-room facility on Narrow Cape, near the launch complex. It's been used, on and off, by the aerospace corporation for 18 years, Karl said.

To meet the corporation's need for more space, Karl was going to bring in extra housing units, set them up on his property and leave them there.

Karl asserts that Aerospace corporation staff endorsed the idea of leaving the extra housing in place, without dismantling it. (He could not provide documentation or emails supporting that claim, however — he said the endorsement came in personal conversations.)

The price was the only functional difference between his company's first and second proposals, Karl added. The first time, the company was the high bidder, and the second time it was the low bidder.

But while corporation officials said the first proposal was acceptable, they rejected the second one. Karl said he thinks that's suspicious, given the two proposals' similarities.

He asserted that the corporation is using the dismantling requirement as a pretext to dismiss his second proposal even though it was cheaper. That, he said, would allow the corporation to choose the higher bid, which would benefit a child of the former corporation executive.

The former executive, John Zbitnoff, was one of the aerospace corporation's evaluators for the second round of bids. Zbitnoff used to be a vice president responsible for operations at the Kodiak launch complex, and after leaving that state job, he was re-hired as a contractor, Campbell said.

Zbitnoff's son, Jascha Zbitnoff, is a part-owner of a Kodiak-based company, Brechan Construction. PRL Logistics — the winning bidder for the housing project — said in its proposal that it planned to hire Brechan as a subcontractor, to prepare the site where the housing units would go.

That meant that of the two bids that John Zbitnoff was evaluating, one would have awarded work to his son's company. Karl said that's a problem.

"This is a set-up deal," he said. "This whole deal is so one person could have the bid."

John Zbitnoff and PRL's president, Ron Hyde, didn't respond to requests for comment in response to Karl's accusations. Jascha Zbitnoff, reached by phone, said he played no part in the bidding or selection process, and didn't talk to his father about it.

Campbell, the chief executive of the aerospace corporation, said no one there ever told Karl that he could submit a bid without plans to dismantle the temporary housing, as Karl asserts he was told.

John Zbitnoff, meanwhile, was one member of a three-person evaluation team that examined whether the bids were technically adequate, Campbell said. The team noticed and flagged the fact that Karl's proposal didn't include deconstruction, but it still said the bid was "technically qualified," Campbell said.

The evaluation team, including Zbitnoff, wasn't responsible for deeming Karl's bid non-responsive, Campbell added. That decision came from separate employees in the corporation's contract office, with Campbell's approval, he said.

"Just because a son might work for a subcontractor for another contractor — I don't see that as an inherent problem," Campbell said. He added: "There's a distance of separation between the two Zbitnoffs."

Campbell said there was, in fact, a substantive difference between Karl's first and second proposals, beyond the prices.

In the first bid, Karl proposed to set up the new housing units on a parcel of aerospace corporation property. Afterward, the units would be moved back to property owned by Karl's business.

The units would only have moved a few feet. That's because the aerospace land where the new housing units would have been placed is next to Karl's existing lodge, and it currently belongs to Karl's company.

If the first bid from Karl's company had been accepted, it would have transferred the land to the aerospace corporation, solely to meet a specification by the corporation that the housing sit on corporation property.

When the contract ended, the new housing units would have been moved off the corporation's new property, back to land owned by Karl's company.

In the second round of bids, the aerospace corporation removed the requirement that the housing sit on corporation land.

So Karl proposed to set up the units on his own land and leave them there. And that plan failed to meet the aerospace corporation's requirements that the units be taken down, Campbell said.

Campbell said the aerospace corporation has asked the Missile Defense Agency about allowing a longer-term housing contract, where deconstruction wouldn't be required after each test. But the agency hasn't agreed, he said.

Missile Defense Agency officials wouldn't make clear why it refuses to let bidders leave temporary housing in place, on private property, when such a step might save the federal government millions of dollars.

The agency seemed to justify its specifications in a written statement, by saying that its needs at the launch site — the Pacific Spaceport Complex-Alaska, or PSCA — are temporary and sporadic.

"Because MDA does not have a continuous requirement for housing and dining at PSCA, we intend to continue the requirement of demobilization of life support areas when planned tests are approximately two years apart," said the statement, attributed to the agency's director, Lt. Gen. Sam Greaves.

Karl's company hasn't formally protested the award of the contract to PRL, and it doesn't want any money, Karl said. Karl has asked for an investigation, however, and he also wants Campbell placed on administrative leave, he said.

"We just want to be treated fairly in the future," he said.

The aerospace corporation's board of directors, in response to Karl, asked its attorney to examine the circumstances of PRL's hiring. The attorney, Thomas Klinkner, wrote a 2 1/2-page memo that attributed the rejection of Karl's proposal to its "non-responsive nature."

Aerospace corporation board members, who are appointed by the governor, are comfortable with the bidding and review processes, Chair Robert McCoy said in a phone interview. He acknowledged, however, that it's "weird" for the Missile Defense Agency to require that the temporary housing be taken down.

"We're generally happy with Alaska Aerospace and Craig and his guys," said McCoy, the director of the Geophysical Institute at University of Alaska Fairbanks. He added: "I think it was handled professionally."

Karl maintains that if his company had been selected, the federal government would have saved money. He also asserts that the Glenn Highway crash, the resulting traffic jam and the $2 million repair bill for the overpass could have been averted, too.

Karl's housing units would have traveled from the North Slope to Valdez, on the Richardson Highway, skipping the Glenn Highway altogether.

"Absolutely, it would have been avoided," Karl said. "One hundred percent."