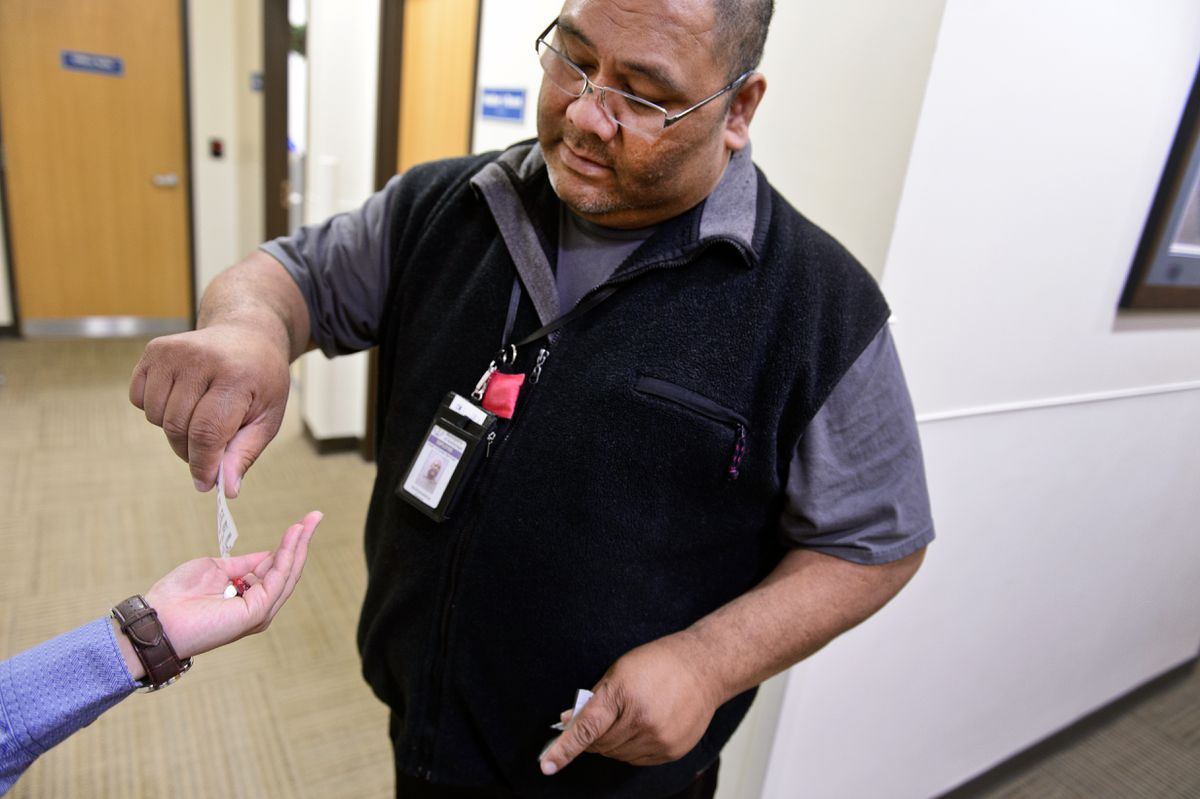 Failagi distributes the medicine that cures tuberculosis, an ancient human bacterial disease more consistently prevalent in Alaska than almost anywhere else in the U.S. Commonly called "TB," the disease disproportionately affects rural Alaska, where it devastated Alaska Native communities during colonization in the late 1700s and 1800s.

An infection transmitted by air through prolonged exposure, tuberculosis comes on slowly, usually as symptoms of a cough or cold. But it can make a person extremely sick and can be deadly. To cure it, patients have to take daily medication for between six and nine months.

This is where Failagi's job comes in: Tuberculosis antibiotics are one of the rare treatment regimen that call for "directly observed therapy," where a health aide or a trained individual watches the patient swallow the pills and records it. The main other comparable is methadone, the medication for an opioid addiction, said Jay Butler, the state's chief medical officer.

The daily observation and recording of pill-taking evolved from worries that people would stop taking the medication too soon or take it incorrectly and get sick again. Health officials fear outbreaks and the development of higher-risk, drug-resistant tuberculosis.

But having a health worker watch every patient swallow their pills five days a week is incredibly costly and labor-intensive. The state health department alone spends roughly $900,000 each year on tuberculosis treatment. It's more disruptive for people who are infected, and requires a lot of logistics — in rural Alaska, health workers coordinate with fishing boats and subsistence camps to arrange the treatment.

In Anchorage, Failagi is the only city health aide coordinating with TB patients. It's a job that takes patience, flexibility and, sometimes, a lot of driving around.

At about 9:30 a.m. on a recent weekday, Failagi left his office at the city health building downtown and drove to the Brother Francis Shelter, the city's emergency homeless shelter on east Third Avenue. He  grew up in Samoa, the independent state, and moved to Anchorage about six years ago in search of a better education for his four children.

In urban Alaska, TB patients include many Asian or Pacific Islander immigrants who contracted the disease in their home country. The highest tuberculosis rates anywhere in the state, however, are in rural Alaska, in the southwest and northern regions — predominantly Alaska Native communities devastated by TB in outbreaks decades ago. There were 23 cases in southwest Alaska in 2017, state health department data show. That's a case rate of about 54 people per 100,000.

Failagi crossed the parking lot, scanning across dozens of people milling around.

"I do this every day," Failagi said. "We have to look around for them."

He went to talk to a monitor inside Bean's Cafe. There was an intercom announcement; still, no one showed. Failagi went back to his car. Sometimes, he said, he has to return to the Brother Francis campus between three and four times a day.

From the shelter, Failagi drove to east. He had a clipboard that listed a dozen addresses. He next parked in a parking lot outside of a bank.

A younger man in a purple long-sleeve shirt and a gray tie and dress pants walked out of the bank. He and Failagi high-fived. Failagi handed him a small water bottle and then tore open a packet of pills. The man took the pills, tossed them in his mouth and swallowed.

The man, who grew up in the Philippines, said he first noticed signs of an illness about six years ago, when he had what felt like a rice kernel stuck in his throat. He was repeatedly misdiagnosed, he said, before learning it was TB.

He has a full-time job at the bank. He's no longer contagious, but he still has a few months of treatment remaining. His daily pill dose has dropped from 10 pills to four. Failagi helps him stay on top of the medication, he said.

"Without this guy over here, I don't know if I can keep going to the center every morning," the man said, pointing at Failagi, and referring to the clinic at the city health center. He has four kids and has to drop them off at school before work.

If a patients misses too many days in a row, it means the treatment has to start over. If Failagi doesn't observe the patient taking the pills, it counts as a "miss."

An ongoing history in Alaska

Tuberculosis is one of the world's oldest human diseases. The bacteria has been found in Egyptian mummies from about 3400 B.C., according to an April 2017 bulletin from Dr. Bruce Chandler, the resident tuberculosis expert for the city of Anchorage.

In the 1800s, the disease was widespread in Europe and many U.S. cities. Some evidence of transmission in Alaska before European colonization has been found in frozen human remains on St. Lawrence Island and in Utqiagvik (formerly called Barrow), according to the bulletin.

But researchers point to the late 1700s and the mid-1800s as the origin of Alaska's current TB epidemic. That's when white explorers, fur traders, whalers, gold miners and immigrants reached the state. At the time, TB was the leading cause of death in the U.S. and many European countries.

The disease ravaged Alaska Native communities. In the first half of the 20th century, Alaska had some of the world's highest rates of TB ever recorded. Until 1950, tuberculosis was the state's leading cause of death. In communities on the lower Yukon and Kuskokwim Rivers, surveys from 1948 to 1951 found that three-quarters of Alaska Native children younger than the age of 8 had positive skin tests.

At the time, isolation was the main way health officials dealt with the illness. So-called sanitariums opened in former Army hospitals in Skagway, Seward and Sitka in the mid-1940s.

The epidemic spurred the construction of the 200-bed Mt. Edgecumbe Hospital in Sitka and the 400-bed Alaska Native Hospital in Anchorage, according to Chandler's bulletin.

The jury is out on whether sanitariums were effective. But the isolation itself was traumatic and disruptive. Elders in rural communities still remember being removed, said Donna Feary, the state nurse consultant on tuberculosis.

With the advent of medicine, tuberculosis rates dropped sharply starting in the late 1950s. But Feary said the state is still struggling to eradicate it completely.

"There's a reservoir of people who were infected when they were young," Feary said. "They were treated, but as we get older, the immune system becomes less robust and we can reactivate."

Treating it off the road system

There are outbreaks every year in rural Alaska. Because of the remoteness of some villages, the response can be expensive. It cost more than $1 million to fight an outbreak in a remote Yukon-Kuskokwim Delta village in 2013, the state's largest outbreak in many years.

In that case, about 18 people were diagnosed in a village with fewer than 1,000 people, according to state records, which didn't identify the village.

In general, when tuberculosis is diagnosed in a remote village, the patient needs to get a chest X-ray. If they're not infectious, they might board a small plane to a health clinic in a larger community for further evaluation, said Katy Krings, the nurse manager of the public health center in Bethel. If they are infectious, treatment may start in the village, she said.

The treatment comes with an observer like Failagi. But in rural Alaska, those observers are not necessarily clinic staff, Krings said. More often, the observer is another village resident who has been trained to do the observations.

Like in Anchorage, health aides try to meet patients where they are. Krings has arranged the observations on commercial fishing boats and in subsistence fish camps.

"We will find a way to not disrupt the treatment and make sure the patient gets all their meds," Krings said.

Krings said officials in rural Alaska are in the very early stages of planning a program that would allow patients to record videos of themselves taking the medicine. More broadly, officials hope medical advances will lead to shorter treatment regimens and, eventually, a vaccine.

For now, Krings' staff distributes cab vouchers, bus passes, medicine and cellphones to patients so they can stay in touch with public health nurses. Some patients get incentives for finishing treatment, like Amazon gift cards or trips to a local Alaska Commercial store, paid out of state funds.

There's an intense focus on making sure people finish treatment and don't spread the disease elsewhere. Krings pointed to the huge disparities in tuberculosis rates between Southwest Alaska and the rest of the United States.

"We need to put our resources toward this," she said. "This is unacceptable."

As hard as health aides work to help people complete treatment, officials say tuberculosis patients can have a lot of other things going on in their lives, such as a lack of food or housing.

While observation helps patients finish the medication quickly and safely, the state "continues to encounter persons who are non-compliant or become lost to follow-up," Chandler wrote in his 2017 bulletin.

During his Thursday rounds, Failagi climbed up one staircase and knocked on a door and waited, but nobody was home.

"They'll call me back," Failagi said.

He regularly communicates with patients through phone calls and text messages, hoping to make it as convenient as possible for patients to meet him.

Toward the end of the day, Failagi drove back to the Brother Francis Shelter, to look around again for the two patients. He was successful this time. One patient he tracked down in the parking lot; the other, he spotted walking on the side of the road. He gave them their pills and watched as they downed them.