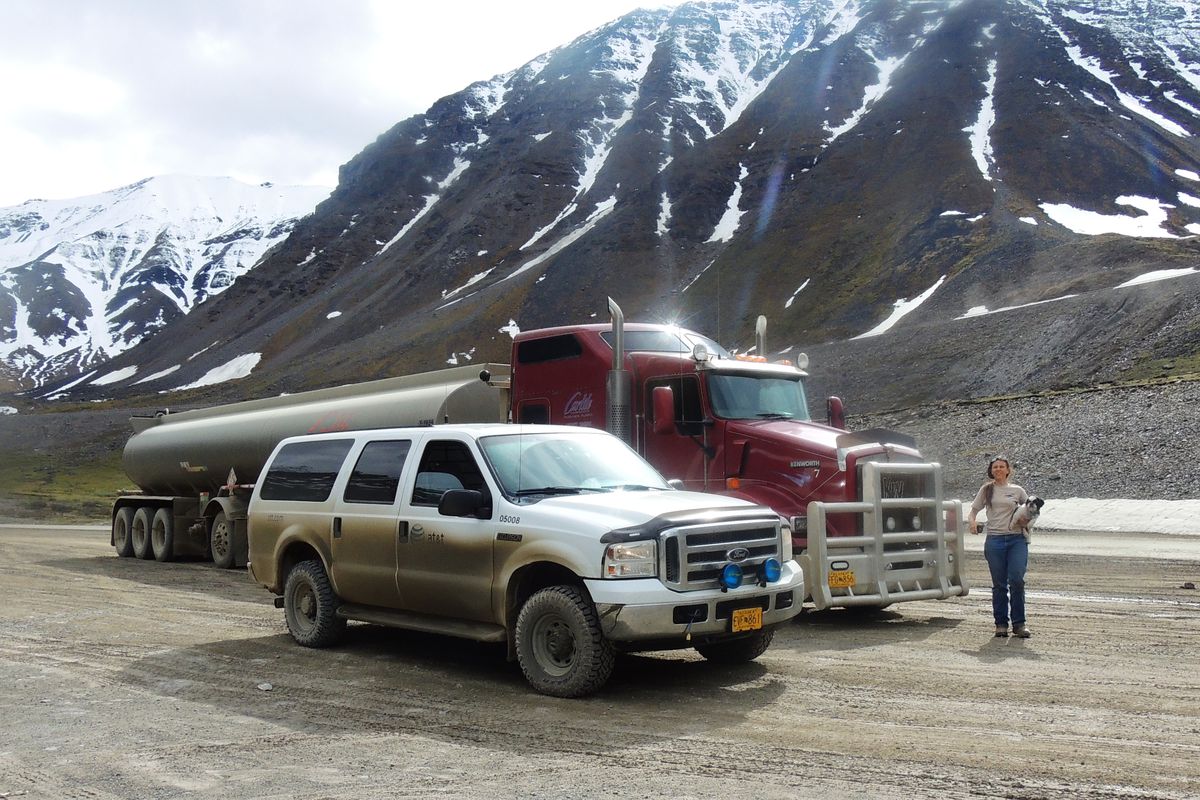 Joy Wiebe and her truck on the Dalton Highway. Photographed June 7, 2015. (Photo by Dawn Foster)

Joy Wiebe and her truck on the Dalton Highway. Photographed June 7, 2015. (Photo by Dawn Foster)

Authorities on Monday identified the driver as Joy Wiebe, 50, a Fairbanks resident and transport driver for many years. The crash occurred about 31 miles south of Deadhorse.

Colville, the transport company Wiebe was working for, issued a statement saying they were "mourning the tragic death" of an employee.

Wiebe was hauling a 59-foot tanker with 9,700 gallons of diesel fuel bound for Prudhoe just before 11:30 p.m. Thursday when the tractor went off a soft shoulder and down a steep embankment, according to the statement.

The force of the impact caused the tanker to flip, which then flipped the tractor further into a swamp basin, the company said.

Wiebe died at the scene "despite efforts by two other Colville drivers who stopped to render assistance," said the statement from president and CEO Dave Pfeifer.

Stunned friends described Wiebe as a careful driver with a generous spirit, one of few women driving trucks on the road that links Interior Alaska with the North Slope oil fields. Wiebe leaves behind three children and her husband, Greg.

"I am honestly in such shock," said Amy Butcher, a professor at Ohio Wesleyan University who is working on a book about Wiebe. "I did that road with her in April. She knew that road better than anybody."

Wiebe drove the road for 13 years, according to Butcher, who plans to finish the book, she said.

The gravel and dirt highway once known as the North Slope Haul Road runs 414 miles from the Elliott Highway to Deadhorse.

The weather was foggy when the rig left the road, according to an Alaska Department of Environmental Conservation update. The accident was reported to DEC at about 4:30 a.m. Friday.

Just under 1,800 gallons of the 9,716 gallons of diesel in the tanker spilled, according to DEC environmental program specialist Colin Taylor. Crews recovered all but roughly 275 gallons as of Monday, Taylor said.

Colville is in the process of developing a work plan for all future
work needed including necessary excavation, soil sampling, waste disposal, and environmental remediation, according to a DEC update issued Monday afternoon. Sorbent materials will be used to collect any visible hydrocarbon sheen at the spill site. Passive bird and animal hazing resources will be used to deter wildlife from entering the area.

Colville has 55 drivers who operate a fleet of tractor-tanker rigs hauling fuel from Valdez to Prudhoe Bay, according to the company. The team makes about 2,000 fuel transport trips per year.

Wiebe had worked for Colville for about four months.

There are other women driving trucks on the haul road but none behind the wheel of a tanker, according to Randi Matheson, who runs a Facebook page for truckers and was a friend of Wiebe.

"She was that person that when you heard her voice on the (CB) or the big radio, you just smiled," Matheson said in a message Monday. "She was a very overly cautious driver and that is the first thing people have said. They just mention how safe she was."

A memorial convoy is in the works for truckers, pilot cars and family members from Colville to the Fox weigh station, she said.

A GoFundMe account set up to help Wiebe's family had raised nearly $5,500 toward a $7,500 goal in two days as of Monday afternoon.

Friends posted messages offering sympathy and fond memories, and recalled Wiebe as someone who embraced the wild country she passed through.

"Joy was always smiling and pleasant and she was my friend," wrote Jackie Veats, who works at Coldfoot Camp, the last stop north at the road's halfway point. "The entire Coldfoot community on the Haul Road will miss her very much."

Veats said by phone that she'd known Wiebe for a dozen years and saw her all the time when she passed through.

Veats had to drive up to the section where the tanker rolled recently.

"The fog was like pea soup. It was awful," she said. "I couldn't see anything."