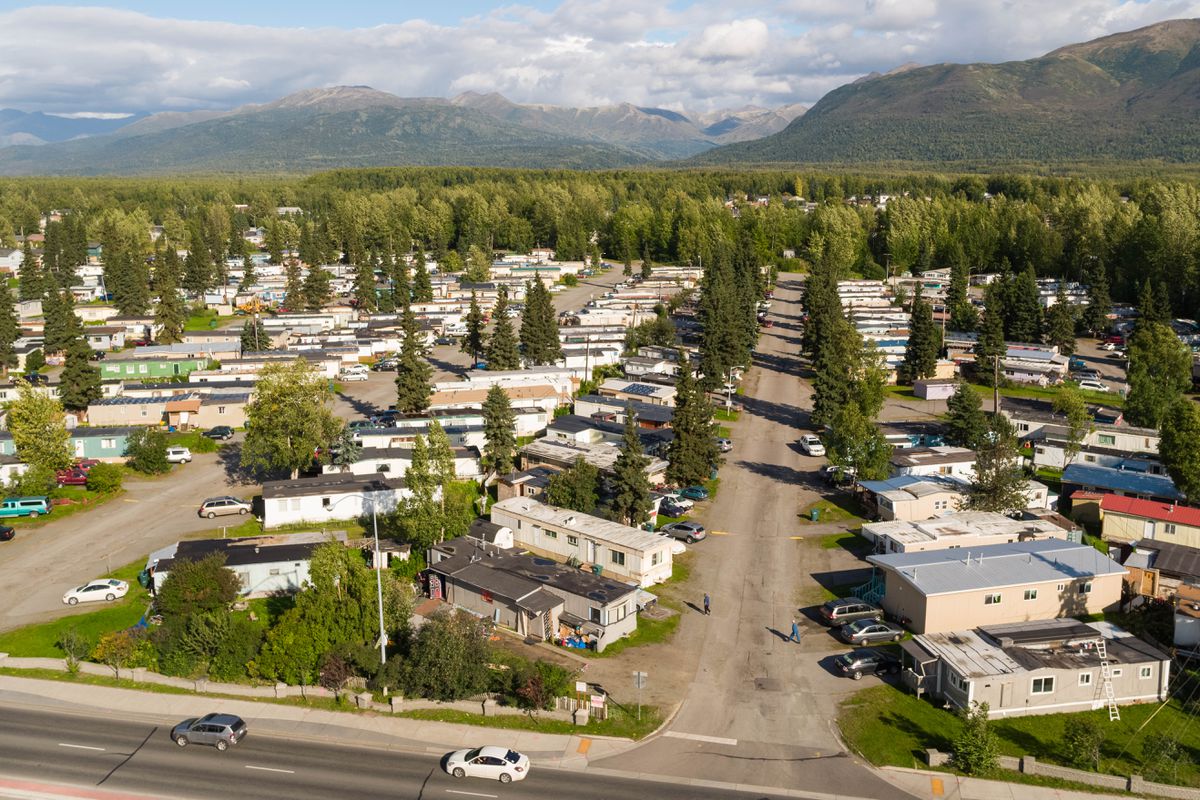 Ringed by sunflowers and plywood, one Muldoon mobile home has earned a special distinction in Alaska voter registration records.

This single trailer is listed as the home of at least 17 registered Republican voters, based on applications submitted to the state earlier this year. At another nearby trailer in the same mobile park, absentee ballots were requested in the name of 14 more Republicans.

How so many voters — including some who show no record of recent dividend applications or other Alaska public records — can list a single home as their residence is now a central question in the puzzle over what happened in the Republican primary for House District 15.

Rep. Gabrielle LeDoux is leading in the Aug. 21 primary, with 452 votes to 339 for opponent Aaron Weaver, overcoming an election night deficit after officials counted more than 200 absentee votes earlier this week. But the Division of Elections identified ballot irregularities, saying 26 absentee ballots cast for LeDoux raised residency or legitimacy questions. Results are set to be certified on Saturday.

Another seven absentee ballot applications were rejected because they were requested in the names of dead voters.

Among the absentee voters who gave the trailer park as their address is Charlie J. Chang, a man hired by LeDoux to recruit voters among "various ethnic communities" in her East Anchorage district. Chang lives in California, not Muldoon, said a man living at the address that Chang listed on elections forms.

A Republican who has been under fire from her party since joining a Democrat-led House majority in 2016, LeDoux said that as far as she knows her campaign did nothing wrong. She says she was not directly involved with outreach among Hmong voters, many of whom she described as living in the Rangeview Mobile Home Park.

With the state Republican party chairman calling for a criminal investigation, a Daily News review of turnout and registration records across the city show a number of unusual trends in House District 15.

Residents living at homes at the Rangeview park said Wednesday that some of the combined 31 people who listed two addresses do not currently live in the trailers. In another case, a man said he did not recall asking for Republican primary ballots that he and his wife received in the mail.

"I don't think that there's anything unusual about trying to get people to vote absentee," LeDoux said, noting that the Republican party also solicits absentee votes.

The effort to recruit voters in at the Muldoon trailer park fell to Charlie Chang, whom LeDoux had previously hired for a campaign 2014.

"I was not directly involved myself in the get out the vote to the Hmong community. That's why I hired a contractor to do that," she said.

LeDoux's campaign bought Chang airline tickets to Alaska and paid him $1,750 in January for "translating and strategizing re: election participation in the Hmong community," according to campaign finance reports.

LeDoux bought Chang tickets again in July and paid him $10,000.

On July 17, the Division of Elections received applications for absentee ballots in the Republican primary from 10 people who listed their address as a single trailer on 705 Muldoon Road, plus another 16 applications for another single-family address nearby, state records show. One of the names was Charlie J. Chang, whose ballot was received by the state on Aug. 3.

The Division of Elections has not released the names of the voters who cast irregular ballots. LeDoux has said that some of the ballots may relate to Hmong voters, with irregularities caused by language barriers or confusion over voters with identical names.

"I really haven't paid attention to who is registered in that trailer park," LeDoux said. "Other than that if I know if the last name is sort of a Chinese sounding name … then it's probably Hmong."

The Republican Party is preparing to wage a write-in campaign against LeDoux in the general election.

"I'm astounded at the pre-meditated quality of this ballot tampering," said party chairman Tuckerman Babcock, who is also suggesting that federal investigators review the case.

Chang did not return calls or emails from the Daily News this week.

When a reporter visited the house where Chang is registered Wednesday, a young man said he was not home. Moments later a couple pulled up and walked into the trailer. A man who identified himself as Yong Vang Chang, 69, said Chang lives in California.

Asked why Charlie Chang is registered to vote at the mobile home if he does not live there, Yong Vang Chang referred questions to "Gabrielle."

LeDoux said she played no role in the effort to recruit Hmong voters.

LeDoux said she spoke to Chang after the state announced ballot problems in her district.

"I hired him for a number of elections, for several elections, and I have no reason to think that he's done anything wrong," she said.

As for the abnormally high rate of absentee voters in her district, identified by the Daily News, LeDoux said that might be because the district includes a large portion of Joint-Base Elmendorf-Richardson.

Meng Xiong, who lives at the home that 17 absentee voters listed as their address, named six registered voters living at the property in an interview Wednesday.

When shown a list of voter rolls that included several additional registered voters who also gave the home as their address, Xiong said those residents were on vacation.