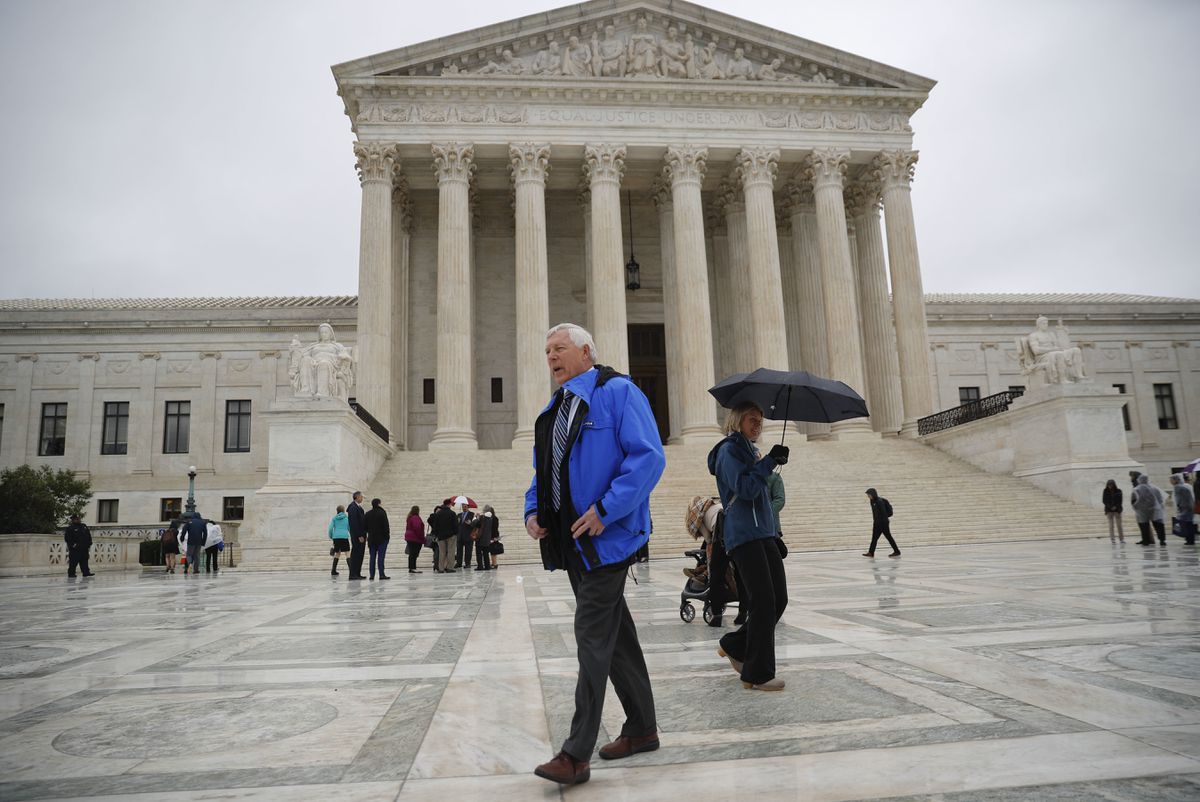 Alaska resident John Sturgeon walks outside the Supreme Court, Monday, Nov. 5, 2018 in Washington. Sturgeon sued the Park Service in 2011 after it told him to stop operating his hovercraft on stretch of the Nation river that passes through the federally created preserve. The State of Alaska would permit this, but the National Park Services regulations said he could not. (AP Photo/Pablo Martinez Monsivais)

Alaska resident John Sturgeon walks outside the Supreme Court, Monday, Nov. 5, 2018 in Washington. Sturgeon sued the Park Service in 2011 after it told him to stop operating his hovercraft on stretch of the Nation river that passes through the federally created preserve. The State of Alaska would permit this, but the National Park Services regulations said he could not. (AP Photo/Pablo Martinez Monsivais)

WASHINGTON — The Supreme Court sounded skeptical Monday of the National Park Service's authority to prevent an Alaska moose hunter from using his hovercraft to access remote areas of the state.

The justices heard arguments in a case that tests the limits of the federal government's authority in a state where more than 60 percent of the land is federally owned.

The state and moose hunter John Sturgeon are arguing that the park service cannot enforce a national ban on amphibious vehicles known as hovercraft on a river in Alaska for which the state claims ownership, even though it runs through a national conservation area.

Sturgeon won an earlier round at the Supreme Court.

The case stems from Sturgeon's 2007 encounter with three park rangers who ordered him off the Nation River within the Yukon-Charley Rivers National Preserve. The rangers told him it was illegal to operate the noisy craft that can navigate shallow water or even mud. He sued in 2011.

The issue is whether a federal law enacted in 1980 to protect undisturbed land but also allow Alaska residents to maintain their way of life provides an exception to park service regulation of rivers that pass through national parks.

"Well, but, I mean, the waters are very important to Alaskans' way of life in the way they aren't elsewhere," Chief Justice John Roberts said, voicing doubt about the Trump administration's reading of the law that gives the federal government sweeping control of the waterways.

Justice Department lawyer Edwin Kneedler told the court that the 1980 law is a compromise because it allows hunting and airplane use in areas that usually are closed to those activities in national parks in other states.

But Congress did not intend to allow hovercraft to be used, Kneedler said, calling them very loud and unsightly.

"While you may think a hovercraft is unsightly, I mean, if you're trying to get from point A to point B, it's pretty beautiful," he said.

That comment aligned with the argument made by Alaska assistant attorney general Ruth Botstein, who said the law protected the state's control over rivers. "Our rivers are our only roads," Botstein said.

The session Monday also displayed the difficulty the justices were having in reconciling the precise language of the 1980 law with arguments on both sides.

"I've burned up an awful lot of gray cells trying to put together the pieces of this statute," said Justice Samuel Alito.

Botstein was asked by Justice Brett Kavanaugh about the state's backing of the so-called Katie John cases, which grant the federal government authority over the rivers to protect subsistence fishing.

Botstein argued the federal law has a special exception ceding water rights to the park service to manage subsistence. She tied this to solicitude for Alaska's unique conditions, which in most other regulatory areas, she said, led Congress to reserve management of navigable waters to the state.