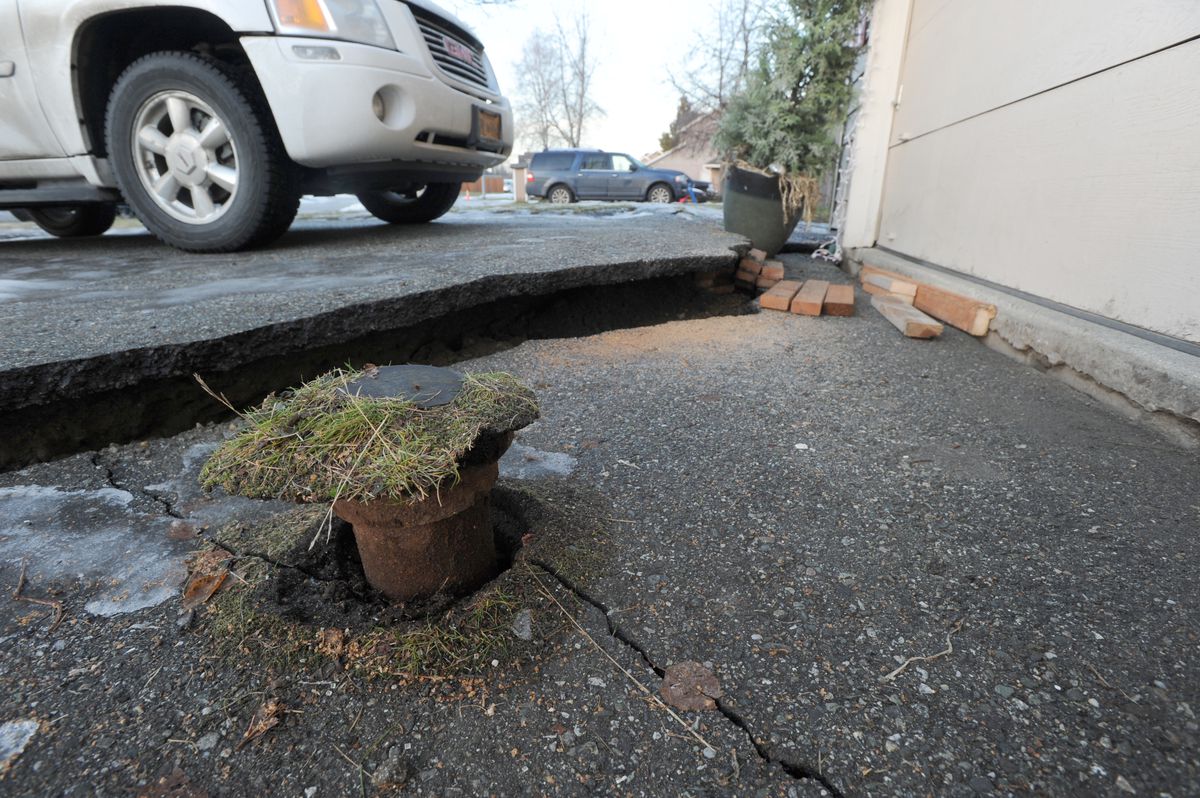 A corner of Nikki and Mike Rose's home dropped during the Nov. 30 earthquake, causing the driveway pavement to crack. The water shutoff, or keybox, remained at its original height. Photographed Dec. 3, 2018. (Anne Raup / ADN)

A corner of Nikki and Mike Rose's home dropped during the Nov. 30 earthquake, causing the driveway pavement to crack. The water shutoff, or keybox, remained at its original height. Photographed Dec. 3, 2018. (Anne Raup / ADN)

A few days later, on Monday morning, two engineers stopped by and toured the house and noted structural damage. Afterward, they handed the Roses a yellow tag. The tag advised against staying in the home without fixing its foundation.

“They’re like, ‘You should probably go,' ” said Nikki Rose, president of the Sand Lake Community Council. Now the couple and their young son are figuring out next steps.

It’s the kind of scene that will be unfolding around the region for days, as engineers work to inspect thousands of buildings and homes for earthquake damage. Engineers are using a colored system of tags -- red, yellow and green -- to communicate safety problems.

In the first few days after the quake, many structural engineers focused on critical facilities, like schools, hospitals and airports, and commercial buildings.

[All the ADN coverage of the 7.0 Alaska earthquake and aftermath]

While many buildings have not shown signs of serious structural issues, a middle school in Houston won’t be open for the rest of the year, officials said Monday. At Joint Base Elmendorf-Richardson, an old theater may never be used again, said Lt. Col. John Ross, a JBER public affairs officer.

In Anchorage, one of two rinks at the Ben Boeke Ice Arena, along with an old fire station, have been deemed unsafe to enter until repairs can be made, said city development director Chris Schutte.

Most buildings are safe to occupy, Berry said. Many of the safety issues stem from cosmetic damage, like cracked ceiling tiles and sheetrock, he said.

Only the small percentage of the buildings examined by his firm had areas that weren’t safe to enter, Berry said.

Once a building is deemed safe, an army of building contractors and plumbers follow, cleaning up messes, fixing roofs and pipes and helping to bring buildings back to normal.

Doug Lipinski, the general manager of Taylored Restoration, said his company has fielded a “massive influx” of emergency response calls since the Friday quake. He said he drew in extra staff from Fairbanks to help.

Most of the damage so far has been water-related, such as broken sprinklers and water mains, Lipinski said.

A water pipe broke and caused damage at Karluk Manor, an east downtown facility that houses chronically homeless alcoholics or drug users. Forty-six people were displaced, many of whom have special needs and disabilities, said Corinne O’Neill, the director of supportive housing at Rural Alaska Community Action Program, which runs the facility. A church is helping house the displaced residents until a part is delivered to make repairs, O’Neill said.

Cook Inlet Tribal Council closed one of its East Anchorage buildings because of a huge mess left by quaking and flooding. Officials led a tour Monday through a number of offices that had been completely upended. Radio station KNBA, which is housed in the building, was off the air Monday.

At the U.S. Federal Building and courthouse on Seventh Avenue in downtown Anchorage, boilers broke and cut off the heat. The building was later found to be structurally sound, but federal officials closed it Tuesday just to let agencies clean up.

Lipinski, who has worked at Taylored Restoration more than two decades, said he had seen the occasional cold snap where crews had to work all day and night to dry out structures.

“But this is beyond anything I’ve ever seen,” Lipinski said.

By the end of the week, Lipinski said he expected his company would see calls shift from commercial to residential as more and more homeowners were able to contact structural engineers.

Matt Emerson, the president of PDC Engineers, said his company focused on emergency facilities and commercial clients in the immediate aftermath of the earthquake. But starting Monday, the firm started to turn to homes, he said.

“Most of these we have now are the homeowners just calling, trying to find a structural engineer that will help them,” Emerson said. Insurance companies are also calling, he said.

Cody Kreitel, a geotechnical engineer for PDC, volunteered to check Nikki and Michael Rose’s house Monday morning because his wife knew Nikki Rose through the PTA.

The Rose home wasn’t in imminent risk of collapse, he said, which would warrant a red tag. But the foundation had been destabilized, so it got a yellow tag, he said. The tag meant the home’s foundation should be fixed before it’s occupied, he said.

But even the engineering work to design that fix is expensive -- between $10,000 and $15,000, Kreitel said. Rose said she and her husband weren’t sure how they were going to pay for both the engineering and the repairs.

Kreitel said he and a fellow engineer also gave a yellow tag Monday to a house off Huffman Road east of the Seward Highway.

In general, it wasn’t yet clear how many private homes in the Anchorage area were deemed unsafe to occupy. Schutte, the Anchorage development director, said there was heavy residential permit activity Monday. Most of the permits were for Eagle River, where at least two homes collapsed, Schutte said.

Kristin DeSmith, the city spokeswoman, said the city recommended residents look for contractors or engineers through the website homeadvisor.com.

Meanwhile, state officials said residents of Anchorage, the Matanuska-Susitna Borough and the Kenai Peninsula whose property was damaged by Friday’s 7.0 earthquake may be eligible for disaster relief grants. Residents can apply for a grant online at ready.gov.