Why did damage vary in Alaska’s 7.0 quake? Soil, shaking, construction quality may all be factors 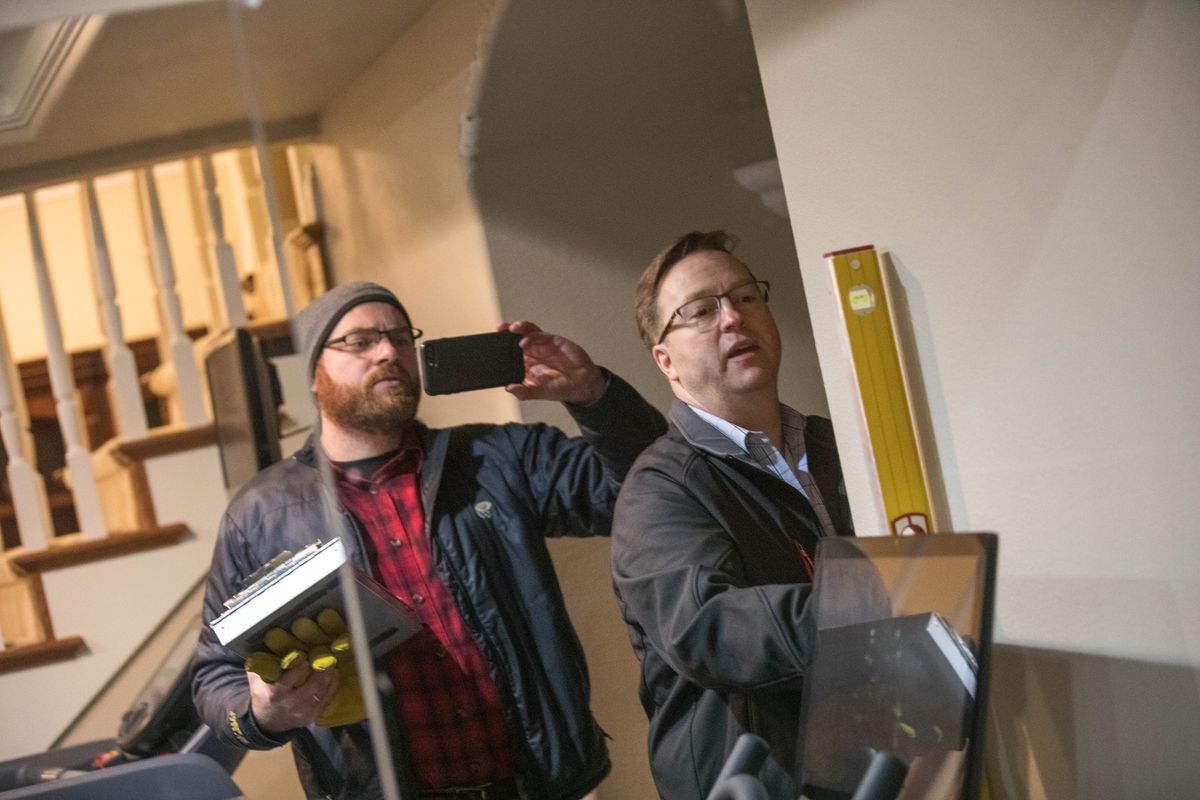 Structural engineer Jake Horazdovsky takes a picture of a level, held by Eagle River homeowner Duncan Whitney, that shows an out of plumb wall in Whitney's home on Tuesday. (Loren Holmes / ADN)

Structural engineer Jake Horazdovsky takes a picture of a level, held by Eagle River homeowner Duncan Whitney, that shows an out of plumb wall in Whitney's home on Tuesday. (Loren Holmes / ADN)

Duncan Whitney spent Tuesday afternoon walking around his damaged home in the Eagle River Valley with a level and an engineer.

As he held the level, Jake Horazdovsky of PDC Engineers took photos showing just how much parts of Whitney’s house had shifted in Friday’s 7.0 earthquake. In one place, a wall had moved away from the flooring by more than an inch. In another, a wall didn’t look quite lined up.

“You can just look at it and see the windows are out of kilter,” Whitney said.

The 7.0 earthquake that hit Southcentral Alaska on Friday left a trail of damage that is still in the throes of being assessed by structural engineers and contractors, using a system of colored tags.

Data isn’t yet available on the scope of the damage. But interviews and other reports suggest that while much of the damage has been cosmetic — fallen ceiling tiles, broken water pipes — some serious structural damage is also now being discovered.

In the Anchorage area, some of the most serious damage has been documented in Eagle River, where at least two homes collapsed and an elementary school will be closed for the remainder of the year. A middle school’s re-opening was also in doubt over concerns about structural damage.

The reason why isn’t exactly clear — and likely won’t be for some time, officials said.

John Thornley, a geotechical engineer and chair of Anchorage’s Geotechnical Advisory Commission, said there are a number of factors, particularly soil conditions, construction quality and the sheer amount of shaking.

“The post-mortem analysis for the structures is going to be important to understand that,” Thornley said.

Eagle River consistently had some of the strongest shaking recorded anywhere in the earthquake, based on seismology data, said state seismologist Mike West.

Ross Noffsinger, Anchorage’s building official, said he suspected the most serious damage was a result of soil failures.

At the same time, Chugiak-Eagle River is under a different set of rules from the rest of the municipality when it comes to building requirements. Because the area falls outside Anchorage’s building safety service area, plans don’t have the same review process as in Anchorage, nor is a municipal inspector required, Noffsinger said. Instead, building contractors are allowed to hire their own inspectors, potentially saving thousands of dollars.

The difference dates back to the unification of the city and borough of Anchorage in 1975, when Eagle River voted not to join the service area.

Noffsinger said that in his opinion, that should change. But he and others also cautioned it was far too early to draw broad conclusions about the structural damage.

“A year from now...we may have a much better picture,” Noffsinger said.

Thornley, the geotechnical engineer, was just beginning to review data from ground monitoring stations around Anchorage. He said he hoped to have a better idea in the next week about the way damage varied across the city. In one part of Sand Lake, for example, a number of homes sank into the ground.

At the Whitney’s house on Tuesday, Horazdovksy spent nearly two hours walking around the exterior and interior. He used the level, surveyed cracks in the home, pounded walls with his fist and took copious notes.

Whitney said he called Horazdovsky’s firm because he was concerned his $800,000 home might be unsafe to occupy.

At the end of the inspection, Horazdovsky sat down at the family’s kitchen table and filled out a color-coded notice documenting his initial findings. More analysis was needed, he said, but he expected to call for major repairs. He uncovered major damage to at least one wall of the home.

Much to the Whitneys’ relief, however, the tag Horazdovsky filled out was green, meaning the house is safe to occupy.

Whitney’s next steps will involve finding a contractor who can perform the work. In addition to bulking up a shear wall in the home, which helps resist lateral forces such as those placed on a home in an earthquake, Whitney will need to replace cracked drywall, re-level an off-kilter deck, replace some windows and more.

Whitney estimated the repairs will run into the tens of thousands of dollars.

Even so, Whitney said it was a relief to get Horazdovsky’s green-tag assessment.

“We’re going to put a smiley face on it and hang it on the front door,” he said.

After completing the inspection, Horazdovsky headed out to another home in the Eagle River Valley. He’s done four or five inspections a day since the earthquake hit.

Michelle Theriault-Boots contributed to this story.