In hard-hit Eagle River, some businesses struggle to reopen 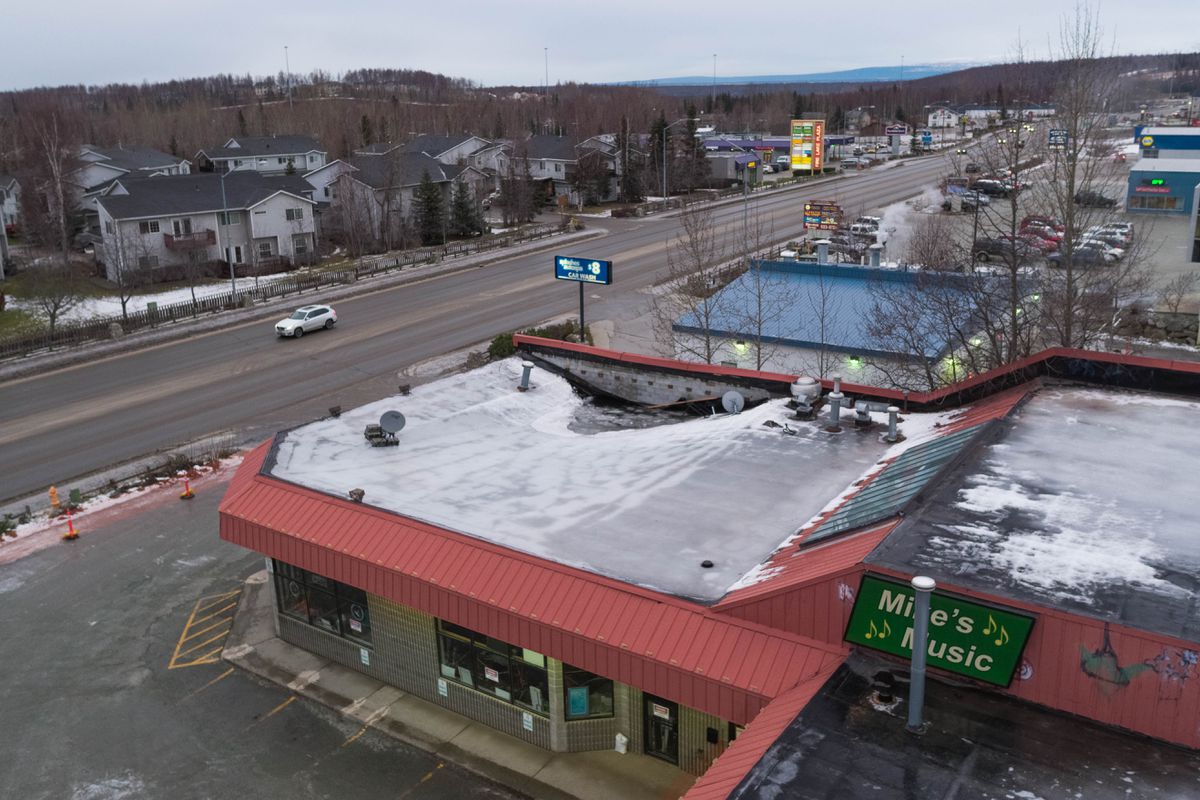 The roof of the Eagle River Pawn Shop, seen on Wednesday, Dec. 5, 2018, collapsed in an aftershock Monday night, according to owner Glen Keller. Prior to that he had been planning on re-opening after Friday's magnitude 7.0 earthquake. (Loren Holmes / ADN)

The roof of the Eagle River Pawn Shop, seen on Wednesday, Dec. 5, 2018, collapsed in an aftershock Monday night, according to owner Glen Keller. Prior to that he had been planning on re-opening after Friday's magnitude 7.0 earthquake. (Loren Holmes / ADN)

Eagle River is still struggling to get back on its feet a week after a 7.0 earthquake ripped through town and left much of the central business district in various states of disrepair.

On Thursday, an informal survey of Eagle River showed damage ranging from cosmetic to catastrophic along the Old Glenn Highway. On “coffee shop row,” Jitters was up and running, Sleepy Dog’s drive-thru was open — the exterior was being repaired — and Starbucks remained closed. Garcia’s and Chepo’s Mexican restaurants were closed, while Jalapeno’s was open for business. McDonald’s was closed but the Pizza Hut next door was open. Most banks were open, but Wells Fargo remains closed indefinitely.

The shop has seen a steady stream of traffic starting almost immediately after the quake hit Friday morning.

“Thirty minutes after the earthquake happened, we came down to assess the situation, and as we turned on the lights just to take a look, there’s a line out the door,” Banfield said. “We didn’t even take a look at our own houses.”

All over town, the ongoing work could be seen in the form of boarded-up windows and industrial dumpsters placed outside businesses as workers and volunteers dug out from the massive mess.

At the Chugiak-Eagle River Library, librarian Nancy Clark said the re-shelving process is still ongoing after approximately 90 percent of the library’s 75,000 books crashed to the ground.

“We still have a lot to do,” said Clark, who didn’t know when the library will be able to reopen.

The library end of the building is still “yellow tagged,” which means it’s safe for workers to enter but not for the public. Clark said she’s gotten “bazillions” of offers to help clean up, but said it’s still too early to let volunteers into the facility.

“If we can get to the point where the space is safe enough to have the public in there, then we’ll bring volunteers in to help clean — but now, we just can’t,” she said.

The Alaska Club, which occupies the opposite end of the building, was able to open for business Monday.

Most businesses were referring people to their Facebook pages to keep people notified as to when they’ll be open. At Carrs, workers outside said the store planned to open to the public at 7 a.m. Friday.

At Trustworthy Hardware, Banfield said it’s been interesting to see the progression of repair needs as the disaster has unfolded. In the first hours after the quake, the store was selling flashlights, gas cans and other emergency items. Then it was water heater parts. Next came people looking for drywall repair supplies. Now it’s paint.

“You can see the phased effect,” Banfield said.

Longtime Eagle River establishment Chepo’s sustained major damage to its interior, including busted water heaters, cracks in the ceiling and a ruined ventilation hood over the grill. All of the restaurant’s food had to be thrown out, and most of its liquor bottles were broken. Owner Lucia Nanez said she’s not sure how long it’ll take to get the business back up and running.

The business lost thousands of dollars of expensive tequilas, a $5,000 Aztec calendar, hundreds of dishes and more. When the quake struck, the beer taps came on, salsa spilled onto the floor and soups splashed everywhere.

The business doesn’t have earthquake insurance, she said, and will be relying on community support to get back on its feet.

“Chepo’s has been serving the community for 32 years,” she said. “I hope the people can come back and support us.”

CORRECTION: A previous version of this story implied the entire Eagle River Town Center building was yellow-tagged. Only the end of the building housing the library and municipal offices was yellow-tagged; the Alaska Club end opened for business Monday after being cleared by engineers.