Federal earthquake relief to be addressed by next Congress 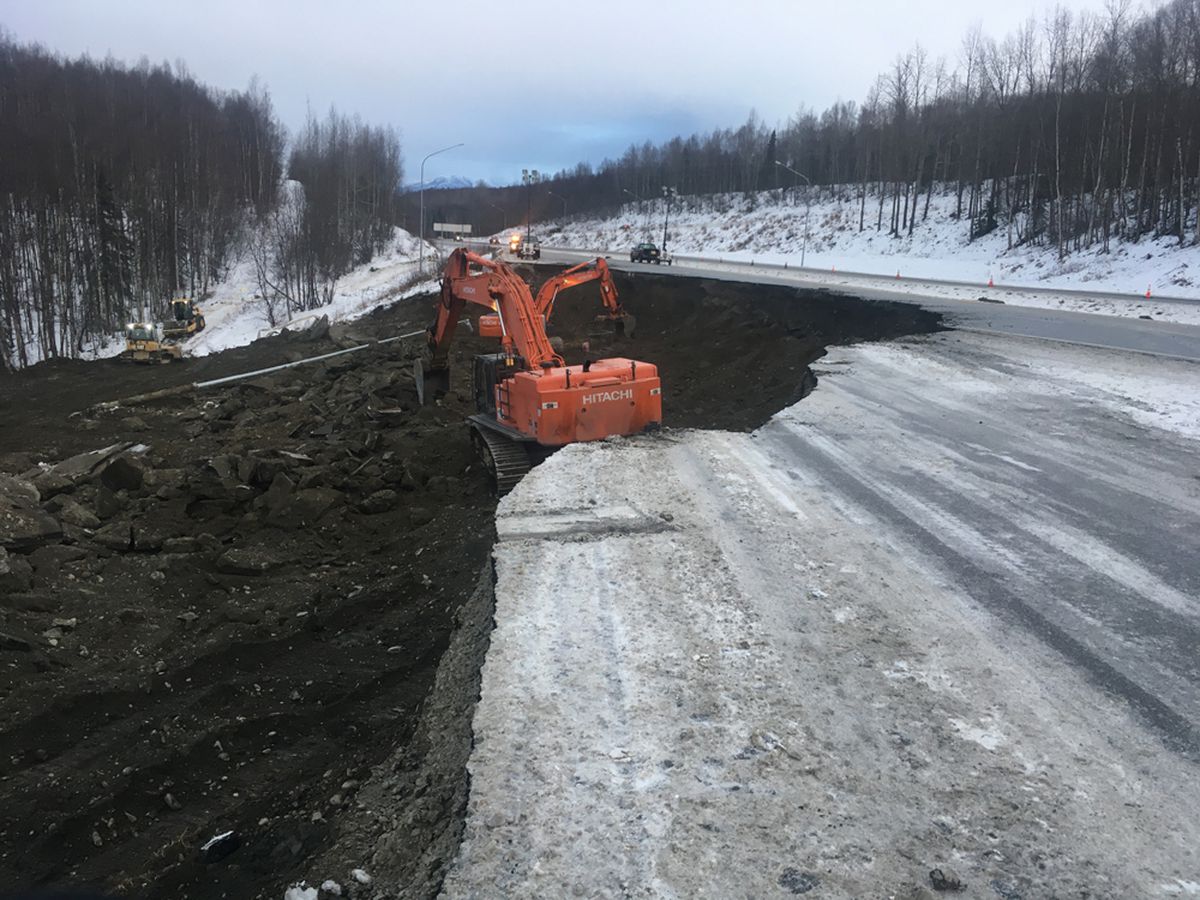 Construction crews work to repair damage to the Glenn Highway near Mirror Lake on Dec. 1. Alaska's congressional delegation doesn't expect any federal relief funding to be appropriated until the new Congress begins in January. (Photo/Courtesy/Alaska Department of Transportation and Public Facilities)

Construction crews work to repair damage to the Glenn Highway near Mirror Lake on Dec. 1. Alaska's congressional delegation doesn't expect any federal relief funding to be appropriated until the new Congress begins in January. (Photo/Courtesy/Alaska Department of Transportation and Public Facilities)

Additional federal aid is undoubtedly on its way north after the Nov. 30 earthquake, but Alaska will have to wait its turn.

Members of the Alaska congressional delegation and their staffs said in the week following the 7.0 magnitude earthquake that disaster relief appropriations would likely first go towards hurricane recovery in the Carolinas and Gulf Coast.

The Federal Highway Administration released $5 million in Emergency Relief funds to the Alaska Department of Transportation Dec. 1 at the request of then-Gov. Bill Walker and DOT officials. FHWA considers that initial $5 million to be a “down payment on the costs of short-term repairs while the state continues damage assessments for long-term repairs,” an agency release states.

Sen. Lisa Murkowski, who serves on the Senate Appropriations Committee, said Dec. 3 after touring some of the damage across Southcentral with Sen. Dan Sullivan that Congress would likely approve hurricane relief funding before breaking for the holidays. She forecasted a separate disaster supplemental spending bill addressing California’s wildfires and the Alaska earthquake sometime shortly after the new Congress convenes in January.

The primary reason for not simply tacking on to the hurricane relief, which staffers noted has been in the works for months, is to get a better understanding as to just how much damage, in monetary terms, was done.

Sullivan added that it could take significant time for state officials to determine exactly what amount of federal assistance is needed.

“Our message (to those reviewing damage) was take your time to get it right, to get it accurate because we’ll probably have one shot, a good shot, to do it. We certainly don’t want to lowball any estimates right off the bat,” Sullivan said.

The senators said they received a call from Vice President Mike Pence in the hours following the earthquake and have heard from other high-ranking federal officials and members of Congress that Alaska will be afforded all of the resources needed to fully recover.

A FEMA spokesman said the agency is still assessing damage.

On Friday President Donald Trump signed a two-week funding bill that avoids a partial federal government shutdown until Dec. 21. Murkowski said the hurricane relief bill would move through Congress ahead of a budget resolution to make sure the priority appropriation is taken care of.

In October, Congress attached nearly a nearly $1.7 billion appropriation for the Carolinas to the Federal Aviation Administration reauthorization bill, which Sens. Richard Burr and Thom Tillis referred to in a release as a “down payment” on Hurricane Florence relief work.

Sullivan estimated the toll of the earthquake to be “at least hundreds of millions of damage that we saw” during a Thursday speech on the Senate floor.

“I know people are scared and nervous wondering how they’re going to pay for all the damage, but we’re going to work together through that,” he added Thursday.

Murkowski spokeswoman Karina Borger said via email that federal aid would likely be channeled through relevant agencies, such as Housing and Urban Development, for qualifying residential damage.

Earthquake damage is spread from the Kenai Peninsula north to Anchorage and the Matanuska-Susitna Borough. The most widespread destruction occurred in Eagle River, just east of the epicenter and in the areas of the Mat-Su immediately surrounding the epicenter at Point MacKenzie.

“Some of these schools look like someone has completely exploded them inside,” Sullivan described.

Roughly a week after the quake struck DOT had identified 50 instances of damage to state roads, with eight considered “major” damage, according to spokeswoman Shannon McCarthy said.

Temporary repairs to sections of the Glenn and Seward highways, as well as the Minnesota Blvd.-International Airport Road interchange were complete within a few days. However, road crews will to return to the once-buckled sections in spring to make permanent fixes.

How much those permanent repairs will cost is still unclear, McCarthy said.