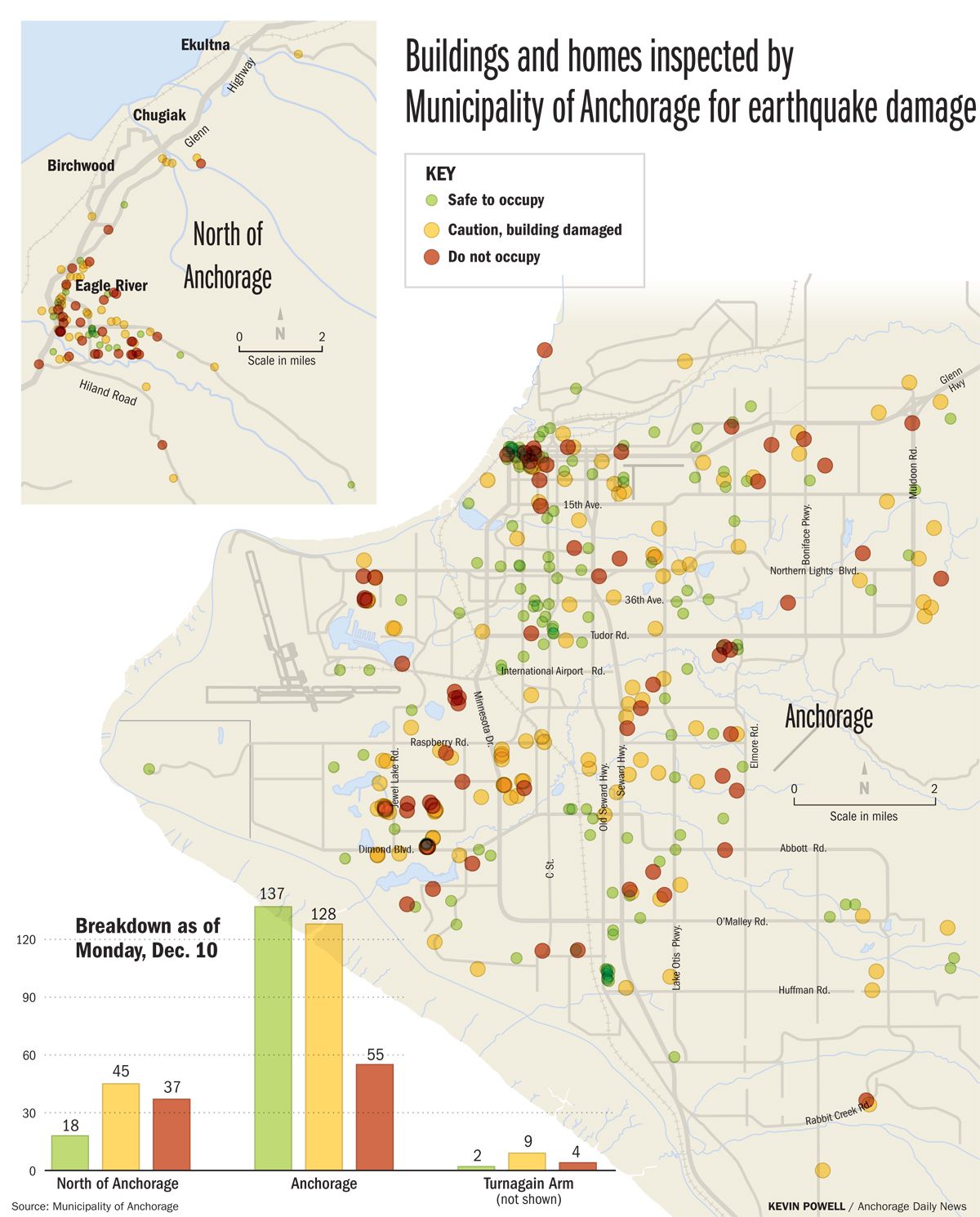 Buildings and homes inspected by Municipality of Anchorage for earthquake damage

Buildings and homes inspected by Municipality of Anchorage for earthquake damage

More than 100 homes and buildings in the Anchorage area were deemed unsafe to enter in a week of damage inspections that followed the 7.0 earthquake that struck Southcentral Alaska on Nov. 30, according to new data from the city.

At least 182 additional structures sustained some kind of damage. Close to 40 percent of the most seriously damaged buildings are in Chugiak-Eagle River, the data shows.

The new data, compiled in response to requests from the Anchorage Daily News, offer the first detailed look at the location and extent of the damage left by the quake. There were no fatalities and relatively minor injuries, but public and private inspections are unearthing a wide range of structural damage, including shifting earth, cracked foundations and collapsed roofs.

There are about 86,000 parcels with buildings in Anchorage, city officials said — meaning that so far, the serious damage is limited to only a fraction of that total. But the number of damaged buildings is expected to grow over time as more inspections take place and property owners take stock of the damage.

Additional information, such as the exact number of people that have been displaced, wasn’t immediately clear.

The maps show that between South Anchorage and Chugiak-Eagle River, no particular area appeared to be obviously hardest hit, with heavily damaged buildings in every part of the city. Mat-Su officials say the same.

The maps are marked with yellow and green dots that show a building’s status after a public inspection. A red dot shows a building is unsafe to occupy; a yellow dot means the building was damaged. While a “red” designation does not mean a building has been destroyed, it does mean engineers decided it was structurally unsound and people should not be in it, said Chris Schutte, Anchorage’s economic and community development director.

There were small clusters of red-tagged buildings in almost every corner of the city, from Sand Lake to downtown to the Campbell Park area of East Anchorage. The southeastern part of the Anchorage Hillside suffered some of the lightest damage, according to the maps.

At least two homes collapsed in Chugiak-Eagle River, which officials said could be linked to a combination of significant shaking, soil quality and construction quality in the area.

Along Turnagain Arm, officials found just four buildings that were unsafe to occupy and another nine with damage.

“We see similar effects in earthquakes all over the world,” Salisbury wrote in an email.

The type of construction used for a building, the geologic material it was built on, and the way the shaking energy was focused or concentrated during the earthquake all affect the level of damage, according to Salisbury.

The Anchorage data has been collected mostly from public inspections, though a large number of private inspections are taking place as well.

[All our coverage of the 7.0 Alaska earthquake and aftermath]

On Monday, federal, state and local officials began to head to the more damaged parts of Anchorage to conduct a preliminary assessment for federal disaster relief. Anchorage officials have been asking residents to submit damage reports directly to a state assistance program. As of Monday, the state had received more than 2,600 damage reports, Schutte said.

The Mat-Su numbers are based solely on self-reports by property owners, may include duplicate reports, and have not been verified by borough, state or federal inspections, borough officials say.

The American Red Cross of Alaska, guided by data from state reports, had conducted more than 200 assessments in Anchorage and Mat-Su as of Monday. The organization used FEMA standards to conclude internally that 86 homes had suffered major damage and another 11 had been destroyed, said spokeswoman Cari Dighton. Dighton said the organization has been offering immediate assistance to homeowners while the state conducts its assessments, though she couldn’t say how many had been relocated to temporary shelters or houses.

Mat-Su residents describing damage at an online site provided by the borough reported one home destroyed, 51 cases of major damage, 125 cases of minor damage and 155 reports of property “affected” in some way by the quake, according to emergency services director Otto Feather. The site received four reports of major damage at businesses — one Wasilla strip mall was closed for days after the quake — 11 reports of minor damage and eight “affected” by damage.

The Kenai Peninsula, farther from the epicenter north of Anchorage, fared far better in the quake than the northern communities. As of Monday afternoon, officials had received only about eight reports of damage, said Jade Gambell, the program manager for the borough’s emergency services department.

Of those reports, just one house may have suffered more than cosmetic damage, Gambell said.

Have you been displaced from your home as a result of earthquake damage? We’d like to hear from you. Email reporter Devin Kelly at dkelly@adn.com.