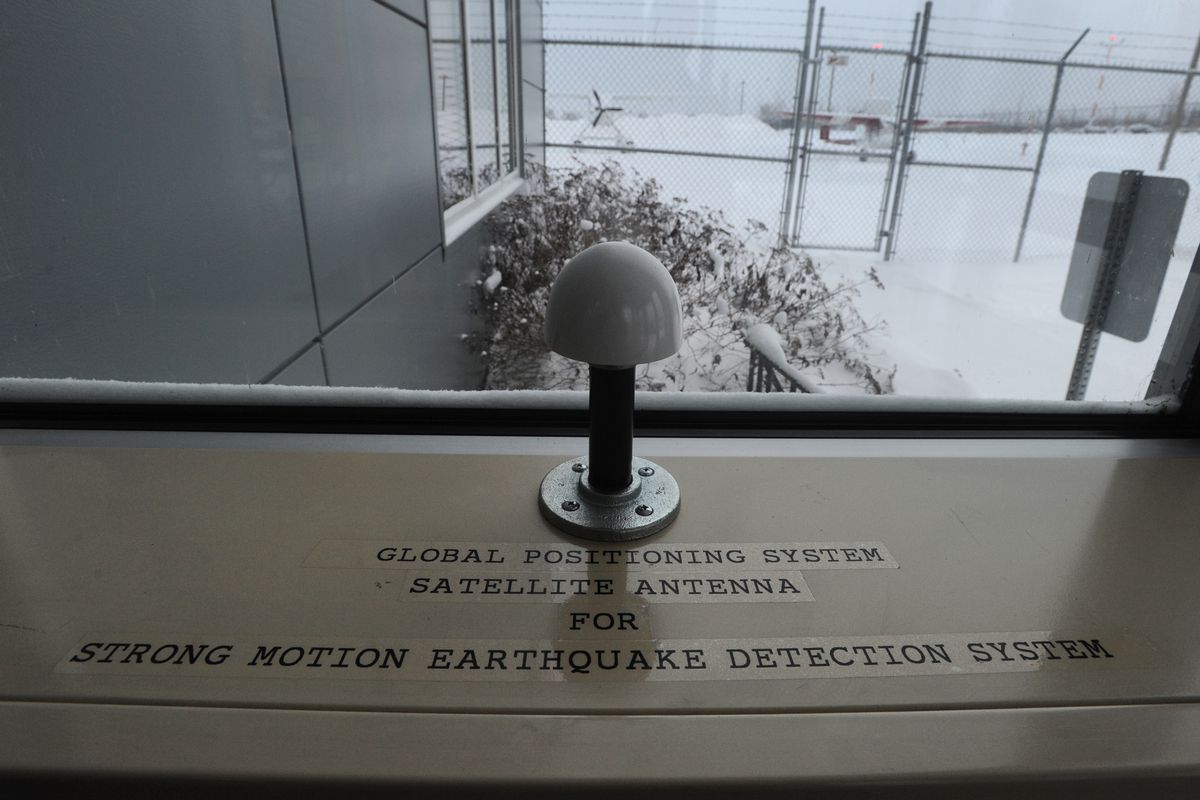 A GPS satellite antenna for a strong motion earthquake detection system installed above a heating unit and the sensor mounted on the floor inside the entry of the Office of Aviation Services building at Lake Hood on Wednesday. The seismic sensor at this location recorded the highest shaking level in Anchorage during the 7.0 earthquake on Nov. 30. (Bill Roth / ADN)

A GPS satellite antenna for a strong motion earthquake detection system installed above a heating unit and the sensor mounted on the floor inside the entry of the Office of Aviation Services building at Lake Hood on Wednesday. The seismic sensor at this location recorded the highest shaking level in Anchorage during the 7.0 earthquake on Nov. 30. (Bill Roth / ADN)

Engineers analyzing data from a network of sensors in buildings across Anchorage found that many smaller buildings seemed to take the brunt of the shaking in last month’s quake, something scientists attribute to the frequency of the seismic waves and Anchorage’s distance from the epicenter.

“The shaking was more severe if you were in a shorter building in some areas,” said John Thornley, chair of the city’s Geotechnical Advisory Commission.

Thornley, with Joey Yang and Utpal Dutta, engineering professors at University of Alaska Anchorage, created three “shake maps” to better understand soil and building behavior from the magnitude 7.0 quake on Nov. 30. The maps show the strength of shaking in the ground, in buildings two stories tall, and in mid-range buildings 10 stories tall.

The group is analyzing data from instruments -- each one about the size of a toaster -- that help make up one of the most comprehensive urban seismograph networks in the U.S. Their findings can be used to make buildings safer in the future.

“The first question, where we build safely, is specifically relevant to Anchorage,” West said. “The other is what kind of buildings fared and well and what didn’t. That is a question of national significance."

[Alaska officials want to know how the quake affected you, and about gaps in emergency alerts]

Sensors from 22 sites across Anchorage show that the quake rattled the ground and buildings harder than originally thought. Shortly after the quake, West had pegged the ground-shaking at about .25 g, or 25 percent of the normal acceleration of gravity, across most of Anchorage. But the figure is now higher after a closer, broader review of data.

How intense was the shaking in some of the smaller buildings? At times comparable to a thrill ride, but with jolts from all sides.

“It’s not a steady, smooth acceleration downhill, it’s like a roller coaster that flies off the rails,” said West.

A two-story building near Lake Hood had the strongest shaking among buildings with sensors in Anchorage, Thornley said.

The top of that building, the federal government’s Office of Aviation Services, experienced more than double the maximum ground shaking recorded in Anchorage, which intensified in buildings that bounced and swayed, Thornley said.

“It was quite a ride here,” said Kevin Fox, regional director of the aviation services office, which maintains aircraft for Interior Department agencies flying across Alaska.

“It probably has a lot to do with the substrate here at Lake Hood," Fox said. “It’s pretty swampy, but the structure was well built for earthquakes, so it came through quite well.”

[Post-quake structural damage isn’t so much a building problem as a ground problem, engineers say]

There was plenty of damage inside. A large air compressor with a 10-foot tank jumped free of its concrete anchors. A heating manifold that distributes warmth jerked off the wall, shutting down the heating system. Bouncing pipes in the sprinkler system broke through ceiling panels.

The hangar survived the much larger 1964 earthquake. But last month’s quake cracked cinder-block walls. An engineer warned they could crumble in an aftershock, she said. Materials with lead paint and asbestos rained down.

The Fish and Game building leased by the state at C Street and Raspberry Road also experienced strong movement, Thornley said. The quake shifted door frames so much that crews had to slam open an office door with a sledgehammer. A hallway now slopes like a wheelchair ramp after settling occurred, employees said.

“You can roll a ball down it,” said Charlie Russell, a biologist displaced from his office.

The southwest portion of the building was badly damaged, forcing about 15 employees to relocate until repairs can be made, Fish and Game employees said Wednesday.

The engineers' shake maps focus on the Anchorage Bowl, not other parts of the municipality like Eagle River, where many homes and buildings were damaged.

There’s only one strong motion sensor in Eagle River available to Thornley. He hasn’t seen that data yet.

Thornley didn’t calculate the force of the shaking at the state’s tallest buildings, such as the 20-story Atwood building in downtown Anchorage. Calculations show it moved 12 inches back and forth at its top, he said. Other experts are studying those buildings.

A video simulation shows how the quake twisted the Atwood Building, the second-tallest in the state. The depiction exaggerates the building’s movement 100 times, so viewers can see the “torsion,” or twisting, said Jim Smith, with the National Strong Motion Project run by the U.S. Geological Survey.

Smith said the illustration is based on 36 seismic sensors inside the Atwood Building. His office developed the video with researchers from the University of California Los Angeles.

“You wouldn’t have seen it swinging like that" in real life, he said.

In the days after the quake, Smith was part of a USGS team from the Lower 48 that deployed 10 temporary aftershock sensors in facilities from the Matanuska-Susitna area to the Kenai Peninsula. They’ll be removed in about three months.

The goal is studying how the aftershocks shake the ground across a broad region.

West, the state seismologist, said he hopes to have many more strong motion sensors installed permanently across Southcentral Alaska, including in Eagle River and the Valley.

“We’ll be talking to the Legislature about that for sure this year,” West said.