An Anchorage family took in a baby and adopted him. Now a court ruling means they might have to give him up. 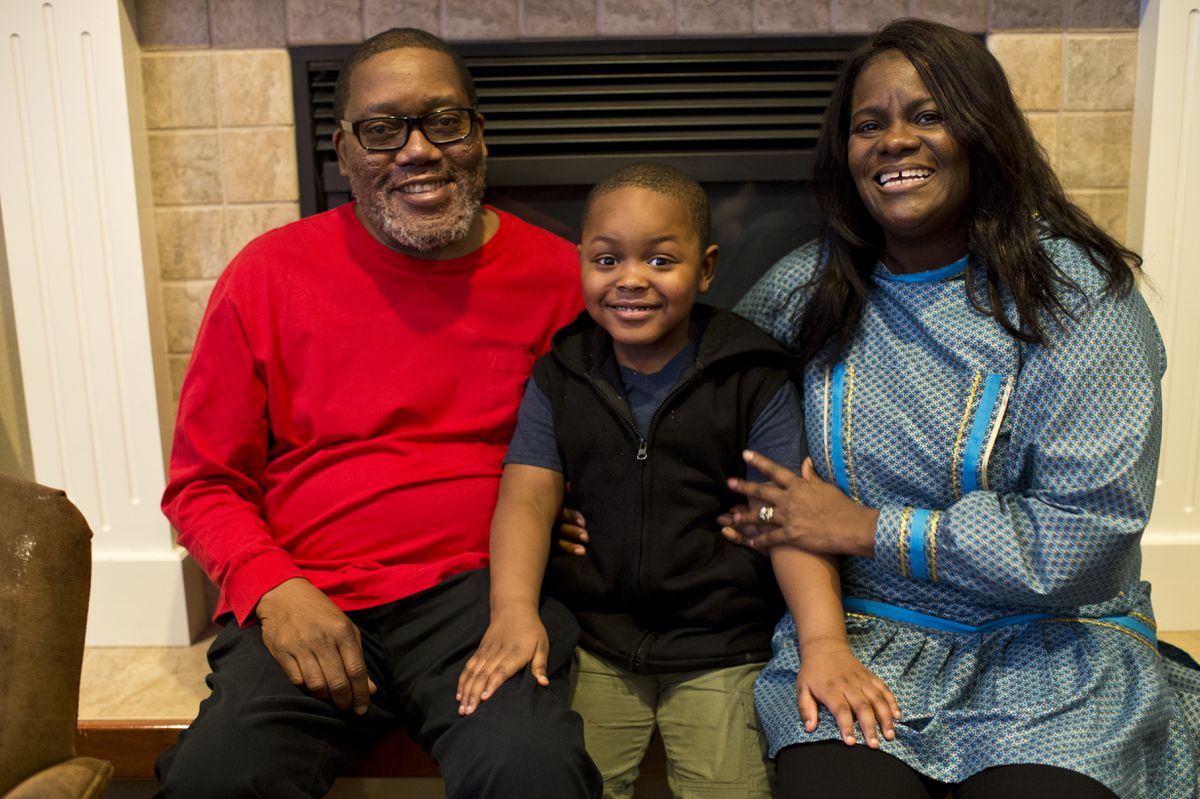 Barry Evans and Stephanie McFadden-Evans have fostered Dominick Evans since he was 5 months old and adopted him this year. (Marc Lester / ADN)

Barry Evans and Stephanie McFadden-Evans have fostered Dominick Evans since he was 5 months old and adopted him this year. (Marc Lester / ADN)

When Stephanie McFadden-Evans and Barry Evans legally adopted the boy they’d taken years ago as foster parents, they thought it meant he was theirs forever.

But now an Alaska Supreme Court decision has thrown that into question.

On Nov. 16, in a blistering opinion, the state’s highest court found that Office of Children’s Services workers failed to give the boy’s biological father, a 36-year-old Anchorage man named Din Smith, a proper chance to gain custody of his son.

In a rare move, the court reversed the termination of Smith’s parental rights -- throwing the legal adoption into question and plunging both the biological father and the adoptive family into uncertainty.

Now everyone involved is girding for a fight over the future of Dominick, who is 4 years old, severely autistic and has never known a home other than with his adoptive parents.

The biological father and the adoptive parents disagree on many aspects of the case, including the crucial question of where Dominick should live. But they agree on one thing: Both feel betrayed by the Office of Children’s Services.

“I did what you asked me to,” McFadden-Evans said on a recent afternoon, her arm wrapped around Dominick as he watched YouTube videos on the couch beside her at her stately South Anchorage home. “I took a kid in. I loved him. I nurtured him. I gave him everything. I went to court. And now this.”

Taking in a baby

The Evans family didn’t set out to become adoptive parents.

Back in 2014, they already had one young daughter, thriving careers running a government contracting business, and a wide circle of community involvements.

But a young woman McFadden-Evans knew had given birth to a baby who was being taken into state custody.

The mother cold-called and asked if she would take the baby boy.

“We felt like, our family is complete," said McFadden-Evans.

But after talking with family, they decided they had a lot to share and said yes.

McFadden, a retired U.S. Navy cryptologist with a master’s degree in education, went to OCS and applied for an emergency foster care license.

Baby Dominick came home on Sept. 15, 2014, a cherubic 5-month-old with round cheeks and a gummy smile.

The family cared for Dominick’s needs, which included visits with his biological mother, some extended family members and half-siblings and medical appointments. By the time Dominick was 2, the signs of autism were becoming evident, McFadden-Evans said.

Their lives became an intricate dance of therapy appointments and other services meant to help Dominick with his autism. For a long time, he couldn’t speak.

“He’s like a little bear. We just love him, and feed him, and shower him with attention and help. We just do everything we can,” she said.

At the end of 2017, the state moved to terminate Smith’s parental rights, which would pave the way for the Evans family to adopt Dominick.

During the two-day trial held in December 2017, Smith represented himself. McFadden-Evans testified. She says the attorney representing the state only called her the day before and told her to “just tell her story.”

After the trial, the OCS told the family Smith’s rights had been terminated, and they were free to adopt the boy.

Adoption day, in February, was “the best day of our lives,” said Barry Evans. Pictures from the day show Dominick beaming in a suit. The family invited friends, even some who flew in from out of town, and had a party afterward, with pizza and a cake that looked like a puzzle and said “you were the missing piece.”

McFadden-Evans said she felt like her policy of complying with every directive that OCS demanded had paid off.

What the Evans family didn’t know was that Dominick’s biological father was appealing the decision.

Din Smith arrived in Alaska in 2005 and stayed after Hurricane Katrina destroyed his New Orleans home.

It wasn’t until months after Dominick’s birth that he learned the boy could be his son.

He says he was taking initial steps to get paternity rights and become involved in Dominick’s life when, in April 2015, he was arrested on sexual assault charges. At the time, he was raising four of his children as a single parent, he said.

Unable to post bail, Smith remained in jail for the next three years waiting for his trial.

This spring, a jury acquitted him on all charges.

“I was exonerated,” he said. “I don’t use the word acquitted.”

But it was too late: During the time he was imprisoned, he lost everything. His home. Custody of his four children who had been living with him. He says he also lost a chance to truly connect with his son Dominick.

The boy made a handful of OCS-supervised visits to see Smith while he was in jail.

All the stimulus of a correctional facility had a devastating effect on Dominick, according to McFadden-Evans. The visits brought out behavior so disturbing that teachers asked for them to stop.

“They just set him back so much,” said McFadden-Evans.

But the Alaska Supreme Court decision found that beyond the handful of visits, Smith was never offered a road map for how to regain custody of his son. All the parties involved are named by pseudonyms in the opinion.

“Here the evidence is undisputed,” the decision reads. “OCS did not create a relevant case plan for (Smith), did not engage him in case planning, and during the 17 months before the termination trial met with him in person only once.”

Since his release from prison, Smith says he has been working to put his life back together. He is renting an apartment with help from a social service agency.

He has regained custody of two of his sons, ages 9 and 11, and a younger daughter who had been sent to foster care while he was incarcerated will soon move in too. He makes the boys breakfast sandwiches in the morning and gets them to school. Christmas stockings were hung on the wall.

Smith says he is prepared to bring Dominick into his home and to deal with his special needs. He knows he has only seen his son during the brief jail visits, but he wants a chance to parent him.

Smith says no one has apologized to him for the three years he spent in prison on a charge he was found innocent of, he said. No one offered to help him get back on his feet when he left jail with nothing other than bankers boxes of documents.

And nobody even told him he’d won the appeal to the Alaska Supreme Court. He only found out when a reporter called.

Jim Davis, an attorney with the Northern Justice Project, which is representing the Evans family, says the case could have a chilling effort on potential foster and adoptive families -- which OCS is already desperate to find.

“The message is that (OCS) cannot be trusted," he said. "That they can’t be relied upon and you would be gambling with your family if you start working with them because who knows how they might mess things up.”

Davis is working to keep Dominick with the Evans family, but he has some sympathy for Smith’s situation.

“I’m a dad myself. If this happened to me, I would be blind with rage. I’m in prison, I’m innocent, I’m acquitted, and you don’t do anything you’re supposed to do and you take my kids away from me?” he said.

McFadden-Evans says she would never open up her family again to the legal vagaries of foster care. If a parental termination of rights can be reversed after an adoption is finalized, what assurance does a family have that anything can stick?

“I told them, burn my foster care license,” she said. “Burn it.”

In a statement, Office of Children’s Services acting director Natalie Norberg wrote that OCS will “continue providing services” to Smith.

“Reversal of the termination order does not mean the child will be removed from his current home and returned to the father," Norberg wrote. "The adoption is not null and void; it remains in effect at this time, and the child remains placed with his adoptive family. Whether the adoption will be vacated in the future is up to the judge.”

Norberg would not say whether OCS had investigated its own conduct in the case or whether any employees had been disciplined.

The boy in the middle

And then there’s Dominick, the boy at the center of it all, who loves the online game Roblox, his iPad and his sister. On a snowy recent afternoon, he sat transfixed by a YouTube video as his parents fretted about the unknown costs of a legal fight and looked over a 52-month timeline of their dealings with OCS.

After a while, Dominick jumped into his dad’s lap and together they made a kind of howling noise, communicating in a private language.

Everyone ended up in the living room, where Dominick began inspecting a wrapped Christmas present under the tree before hopping on the couch to jump around.

“My son,” McFadden-Evans said. “He doesn’t understand any of this.”