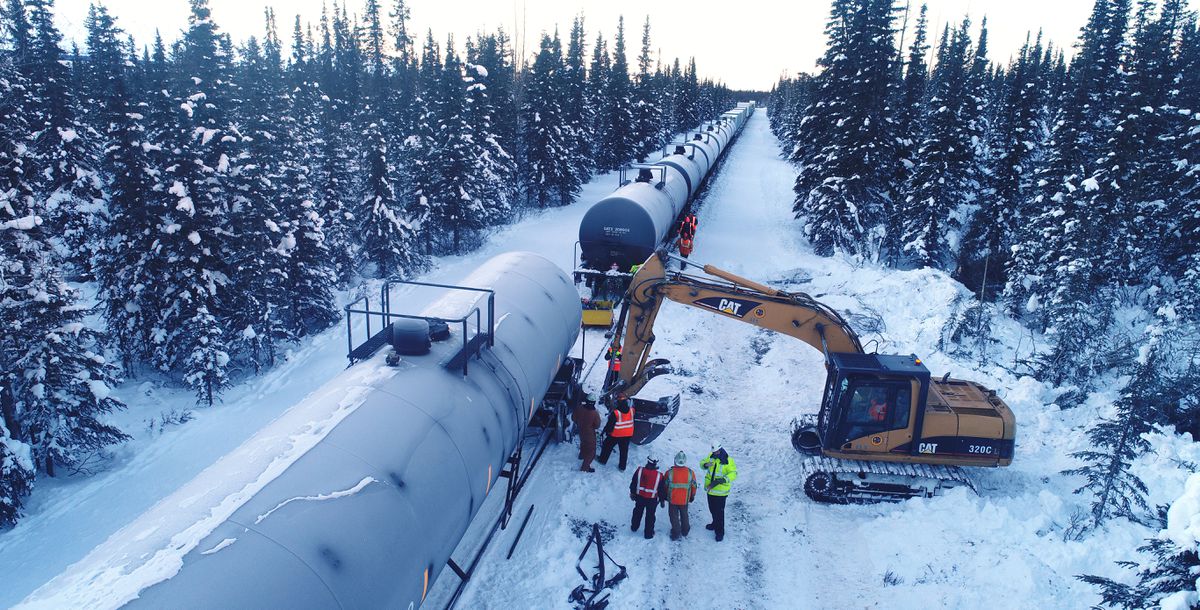 Update, Friday 5:53 p.m.: The Alaska Railroad Corp. will reopen the mainline track beginning Friday night. The Aurora Winter Train will operate its regularly scheduled service beginning Saturday morning. Trains will be operating under slow orders throughout the area, which may cause some delays. A fuel tanker had damaged portions of the Alaska Railroad when it derailed early Tuesday morning.

Several thousand rail road ties — the slats that run perpendicular to the tracks — were damaged when the tank car derailed three miles south of Cantwell around 3:14 a.m., the statement said. An apparatus underneath the car that holds the axles and wheels dropped onto the ties, ripping them up as the train moved.

The derailed tank car was part of a 76-car train that was on its way to Fairbanks from Anchorage. Crews have already cleared 51 of the cars from the tracks, either by separating them from the derailed car to continue north or by hauling them south. The remaining 24 cars have been trapped on the tracks behind the derailment.

Railroad crews pumped the 23,000 gallons of jet fuel the car was carrying into a separate tanker on Wednesday, which reduced the car’s weight enough for it to be moved onto a side track. The car now carrying the fuel, along with the 24 remaining freight cars, will be sent northward to Fairbanks, the company said.

No injuries or fuel spills were reported.

The company said investigators are still trying to determine what caused the derailment, but “the investigation is focusing on a wheel bearing that failed on the derailed car.”