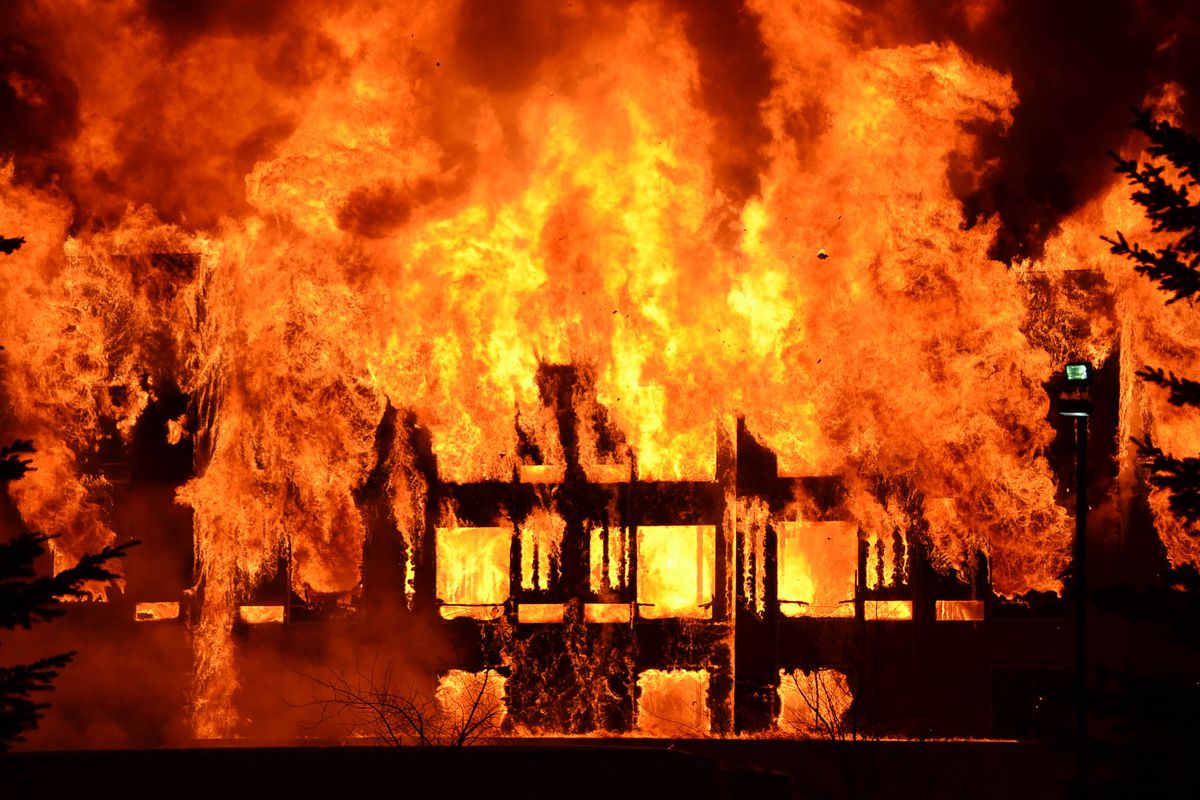 A fire burns at an under-construction hotel in Midtown Saturday morning, Jan. 26, 2019. The site was going to be a 141-room Courtyard by Marriott, according to property records. (Aaron Fung photo)

A fire burns at an under-construction hotel in Midtown Saturday morning, Jan. 26, 2019. The site was going to be a 141-room Courtyard by Marriott, according to property records. (Aaron Fung photo)

Two fires that destroyed Anchorage commercial buildings are now considered arson-caused, but police say there’s no sign they are connected.

The Anchorage Police Department announced Wednesday that it’s taking over arson investigations into a massive fire Jan. 26 that destroyed a partly constructed, 141-room Courtyard by Marriott hotel and an unrelated blaze early Monday that gutted a sushi restaurant off Tudor Road.

Police are looking for two people who may have information about the hotel fire, APD spokesman MJ Thim said. Detectives are also looking for two men captured on surveillance video during a break-in and subsequent fire at the restaurant.

“We have no indications these fires are connected in any way,” Thim said. “These are two separate investigations.”

Fire officials have not released any information about the origins or causes of either fire.

Anyone with information about the people involved or the investigations into either fire can call police at 311 or Crime Stoppers 907-561-STOP to remain anonymous.

The hotel fire destroyed the building and created a smoke plume seen all over the city. A fire official called it a “massive loss” that was later estimated at $20 million.

A police officer responding to the fire captured two men in the area at the time on his dashboard camera, Thim said Wednesday. The men are not described as suspects.

“They were in the area at the time of the fire and that’s why we want to talk with them,” he said.

The fire was so hot it cracked windows and melted a sign at a nearby Motel 6. One firefighter was treated for heat exhaustion. A team from the Bureau of Alcohol, Tobacco, Firearms and Explosives traveled to Anchorage to help determine what caused the fire.

Federal investigators briefed Anchorage fire and police officials on Saturday, a Seattle-based ATF spokesman said. Any information about the hotel fire at this point must come from local agencies, he said.

The hotel, at 4960 A St., between Tudor Road and International Airport Road, was at a stage of construction where it was mostly wood and didn’t yet have a completely installed sprinkler system, officials have said. A construction worker described a couple of recent thefts at the job site.

Surveillance video posted to the Anchorage Police Department Facebook page shows the two suspects fleeing as the fire roars inside the building. One of the suspects tries to beat the fire off his hand before removing his still-flaming glove and tossing it aside.

The two suspects then escape through a fence door.

Investigators believe both suspects were injured during the crime, police said.

UPDATE: This surveillance video shows the suspects escaping the scene of the Yakitori Sushi arson. As the suspects were fleeing, it appears that the hand of one of the suspects was on fire. The suspect removes his glove, which is on fire, tosses it and then both suspects flee through a fence door. It’s believed both suspects were injured as a result of committing this crime. If you have any information about these two individuals and/or this investigation, including video (smartphone/and or surveillance), please call Dispatch at 311 or Crime Stoppers at 907-561-STOP to remain anonymous. APD Case: 19-4480

The restaurant has no immediate reopening date given the extent of damage, an owner said Monday. Seven employees are out of work, according to Jim Kammermeyer, a loyal customer who’s started a GoFundMe fundraiser to help them out.

The fires were among six in commercial buildings since the start of the year -- but the only two classified as arson.

Two people were injured in a Jan. 28 fire that damaged the second floor of a building that also houses Brown’s Electric on Old Seward Highway.

That fire, which originated in living quarters on the second floor, was determined to be an “unintentional accidental fire,” Hill said.

On Jan. 3, fire destroyed the former Sea Galley restaurant on C Street just north of Tudor Road. The restaurant was recently closed and was not occupied at the time. Investigators later determined that “vagrants” were inside the building shortly before the fire was reported.