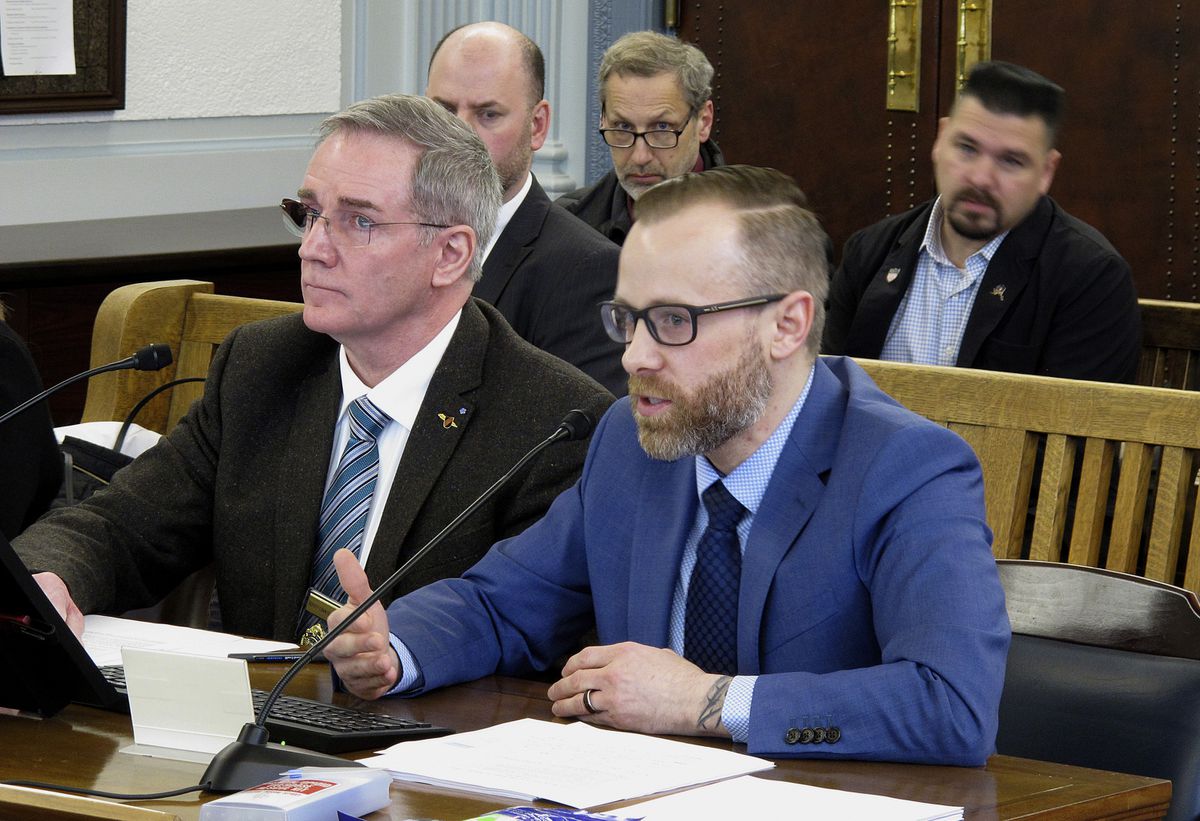 Andy Jones, right, director of the Alaska Office of Substance Misuse and Addiction Prevention, speaks before the Senate Finance Committee on Thursday, Feb. 7, 2019, in Juneau, Alaska. Shown beside him is Michael Duxbury, deputy commissioner of the state Department of Public Safety. (AP Photo/Becky Bohrer)

Andy Jones, right, director of the Alaska Office of Substance Misuse and Addiction Prevention, speaks before the Senate Finance Committee on Thursday, Feb. 7, 2019, in Juneau, Alaska. Shown beside him is Michael Duxbury, deputy commissioner of the state Department of Public Safety. (AP Photo/Becky Bohrer)

JUNEAU — Preliminary numbers released by the state indicate the number of opioid-related overdose deaths in Alaska fell between 2017 and 2018.

Andy Jones, director of the state Office of Substance Misuse and Addiction Prevention, told a Senate committee Thursday that this suggests steps being taken to address opioid abuse are working.

But Jones said there is more work to do.

The preliminary data showed there were 100 opioid-related overdose deaths in Alaska in 2017 and 58 last year.

In 2017, then-Gov. Bill Walker declared opioid abuse a public health disaster, and the Legislature approved issuance of a standing medical order for a naloxone distribution program through June 2021. Naloxone can help prevent overdose.

The state has passed a law addressing opioid prescriptions; sued opioid manufacturers, including the company that makes the prescription opioid painkiller OxyContin; and taken steps on prevention, treatment and enforcement.

According to the state, the total cost associated with its response to opioid abuse was $210.9 million over the last two years. That includes federal funds, substance abuse treatment and recovery and prevention grants and treatment costs within the Department of Corrections. The state's presentation to lawmakers indicated that 80 percent of those in Corrections custody have substance abuse issues.

Some of the grant funding was specific to opioids but it mostly addressed substance use disorders generally, according to a state report.

Jones said looking broadly at more than one substance is important as the state responds, noting Alaska has issues with other substances. Alcohol remains the state's biggest problem, "by far," he said.

"The whole thing is that these issues are not helping us create healthy, safe communities that can thrive and prosper off of opportunity because it just takes opportunity away from them," Michael Duxbury, deputy commissioner of the Department of Public Safety, said after the meeting.

Meanwhile, UnitedHealthcare on Thursday announced steps it is taking nationally affecting dental plan coverage to address opioid concerns. The company said oral health "is often overlooked as a connection to this epidemic."

For example, the company said first-time opioid prescriptions written by dental health professionals for those 19 and younger will be capped at three days. Policy holders with dependents between 16 and 22 years old will get information about the risks associated with opioids, particularly as it pertains to wisdom teeth extraction.

UnitedHealthcare said it has about 620 people on its dental plan in Alaska.