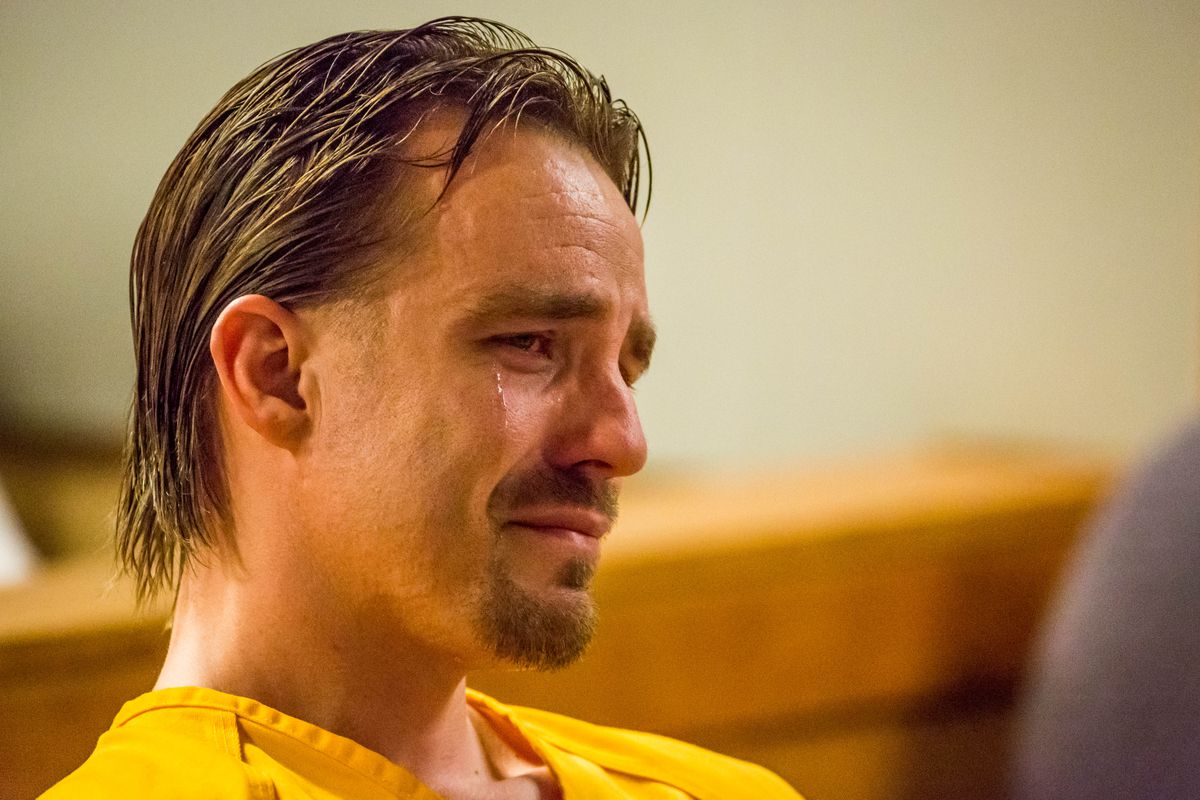 Stacey Allen Graham cries as he watches a slideshow of 15-year-old best friends Jordyn Durr and Brooke McPheters on Friday, February 6, 2015 in an Anchorage courtroom. Graham drove drunk in 2013, killing the two girls, and was sentenced by Judge Kevin Saxby to 32 years in prison. (Loren Holmes / ADN)

Stacey Allen Graham cries as he watches a slideshow of 15-year-old best friends Jordyn Durr and Brooke McPheters on Friday, February 6, 2015 in an Anchorage courtroom. Graham drove drunk in 2013, killing the two girls, and was sentenced by Judge Kevin Saxby to 32 years in prison. (Loren Holmes / ADN)

An Alaska appeals court has thrown out the unprecedented 32-year prison sentence for a DUI driver who killed two teenage girls walking on a South Anchorage bike path in 2013.

The three-judge panel found that key facets of Anchorage Superior Court Judge Kevin Saxby’s sentencing analysis were “legally mistaken,” according to the opinion handed down Friday.

The judges also found that Saxby’s decision “appears to have been influenced by the principle of retribution — something that Alaska law does not allow.”

The panel ruled that Saxby cannot preside over the re-sentencing decision, according to the opinion written by Chief Judge David Mannheimer.

The ruling, particularly the decision to remove the judge, marks a striking turn in one of the most high-profile cases involving a drunken driver in recent Alaska history.

Stacey Graham, 32 at the time, was driving his Toyota Tacoma pickup on an August evening when it jumped a curb at high speed and struck 15-year-olds Jordyn Durr and Brooke McPheters, who were walking home from a back-to-school shopping trip. Graham, driving home from a company golf tournament and then a friend’s house, lost control of his truck where Dimond Boulevard curves into Abbott Road near the Independence Park neighborhood.

He was “heavily intoxicated” -- three hours later, his blood alcohol level measured more than twice the legal limit for driving -- and witnesses described him tailgating and recklessly passing other vehicles before his truck hydroplaned and went out of control, according to the appeals court opinion.

He pleaded guilty to two counts of second-degree murder in 2014. Under the terms of his plea agreement, Graham was subject to 13-20 years to serve on each count, with time to serve portions running consecutively, resulting in a 26- to 40-year range.

In a courtroom packed with observers including the girls’ families, Saxby in February 2015 sentenced Graham to two consecutive 20-year sentences, each with four years suspended, saying he believed that was the longest in Alaska’s history for conduct of this type. The sentence for vehicular homicide is unprecedented in Alaska, the appeals judges agreed.

Graham appealed the sentence, arguing it was excessive.

The appeals court action does not resolve that question, according to the opinion.

Instead, the appellate judges remanded the case back to Superior Court for re-sentencing -- and ordered that Saxby not preside over those proceedings.

The mothers of both girls on Friday declined to comment.

The state Department of Law during the appeal process “argued strongly that we believed the sentence imposed by Judge Saxby was appropriate and well within constitutional limits," senior assistant attorney general Cori Mills said in a statement Friday afternoon. "We are disappointed in the Court of Appeals’ decision to send the case back for another sentencing hearing. We are currently evaluating our legal options moving forward.”

Appealing the decision to the Alaska Supreme Court is one option.

In its opinion, the appeals court faulted Saxby’s reliance on emotional testimony and sentencing factors of crime deterrence and community condemnation.

During sentencing in 2015, Saxby acknowledged that Graham was remorseful and had good potential for rehabilitation, but noted his decision had to deter others and he had to “be a voice” against drunken-driving homicide that was especially high given a spike in deaths and “even higher here, where two innocent young girls were essentially smashed to death," the opinion states.

Graham’s criminal history before the night he hit the girls consisted of one speeding ticket, the appeals panel pointed out.

They found four legal errors in the judge’s decisions:

• Saxby’s use of a 20- to 30-year “benchmark” sentencing range for first felony offenders of second-degree murder arising from a vehicular homicide due to his misinterpretation of an appeals decision of the sentence of an Anchorage man who killed another driver while fleeing police in a stolen truck;

• Saxby’s conclusion that Graham’s crimes were aggravated because his drunken driving endangered three or more people based on witness reports of his erratic driving before he hit the girls. The appeals panel found any drunken driver poses similar risks;

• Saxby’s conclusion that Graham deserved an extraordinarily severe sentence to satisfy the goal of community condemnation conflicts with Alaska Supreme Court decisions saying condemnation should reaffirm societal norms but does not mean retribution and can’t be used to “give voice to the community’s outrage" at a defendant or particularly disturbing crime;

• And Saxby’s conclusion that an extraordinarily severe sentence would deter others, despite little evidence that higher sentences prevent drunken driving. The number of arrests for impaired driving peaked in Alaska at 5,484 in 2008, then fell to 2,420 by 2014, according to Alaska Department of Public Safety statistics. By 2015, when Graham’s unprecedented sentence was handed down, the number jumped to 3,161 -- a 30 percent increase.

The opinion states that judges deciding a drunken-driving homicide sentence need to follow criteria set in Alaska law, as well as the defendant’s recklessness, magnitude of the consequences of their conduct, their record of alcohol abuse, and prior sentences.

The opinion includes numerous examples of Saxby’s decisions to allow emotionally charged testimony that compromised his ability to “render a reasoned sentencing decision that comported with the law and did not rest on retribution.”

It references 32 minutes of memorial videos -- photo collections of both girls, played with musical backgrounds -- played during the sentencing hearing, as well as allowing police to deliver “victim impact” statements at the families’ request.

An Anchorage police sergeant recalled telling the families their daughters were dead as the worst act of his life.

Former Anchorage police chief Mark Mew was supposed to address the effect of drunken-driving homicides on rank-and-file officers but instead recited statistics of a recent spike in such crimes -- five deaths in 2013 and 11 in 2014 -- before urging the judge to deter future drunken drivers, the appeals court found. “The sentence you hand down today should be severe enough to scare the eleven worst drunks in Anchorage into not driving.”

Graham’s defender objected to the police statements as going beyond what’s allowed in statute, the opinion states.

“But the sentencing judge displayed little patience for this objection -- and he then issued a ruling that was based on a misreading of the statute,” Mannheimer wrote. The judge allowed police to testify as people speaking on behalf of the girls, despite the defense objections that the comments were in addition to the victims’ families.

The prosecutor on the case urged the judge to make an example of Graham with a 40-year sentence, the opinion states, and called prior sentencing decisions in similar situations wrong, the opinion says. Graham’s lawyer recommended a 26-year sentence and urged the judge to be “careful to distinguish between the emotions we all feel and what the law is."

Until Graham’s sentence, the highest approved in a drunken-driving homicide for a defendant without prior felony convictions was the 20-year sentence Lori Phillips received for killing Louis Clement and severely injuring his fiance, Joyua Stovall, in a 2009 head-on collision on the Seward Highway.

Saxby sentenced Graham to a sentence a decade longer than any other similarly situated offender has ever received, Mannheimer wrote. “But there is no verified reason to believe that imposing such a sentence on Graham has achieved, or will achieve, the societal goal of preventing drunk-driving homicide, or that it will even significantly reduce the incidence of this crime.”