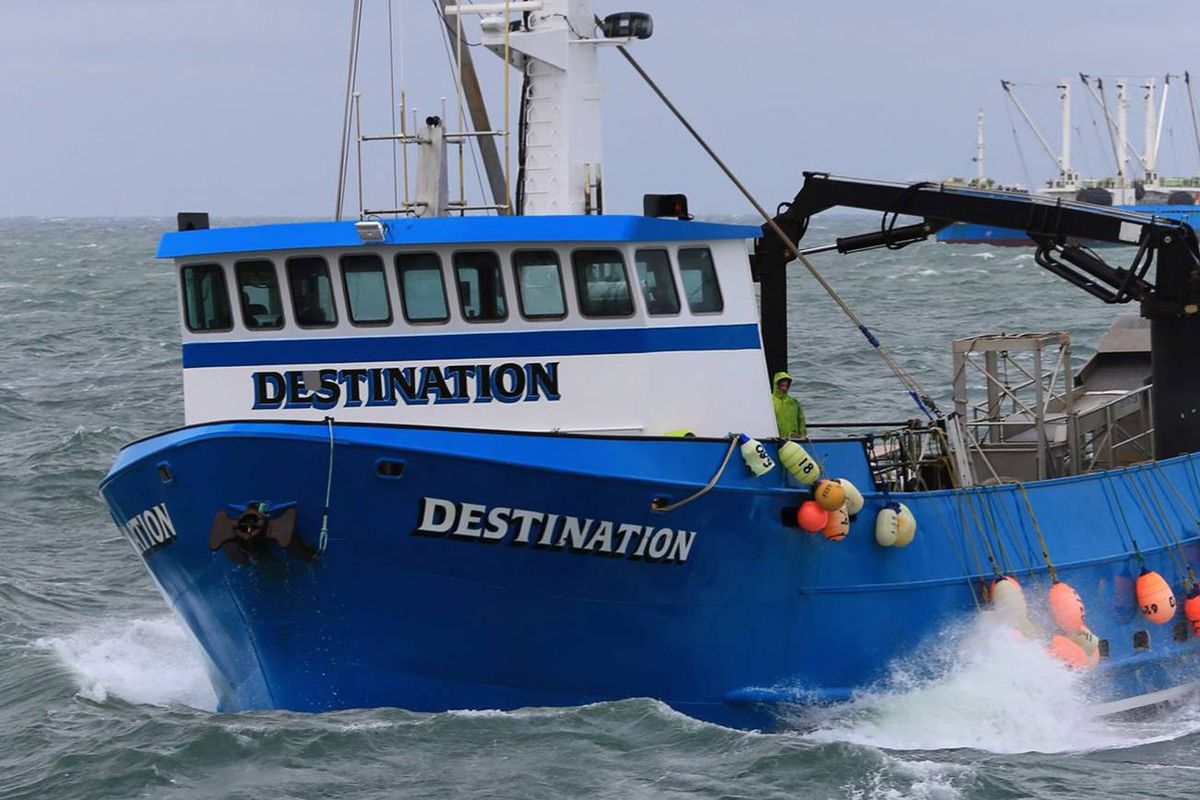 The ability of the Seattle-based Destination to stay afloat in the harsh conditions of a Bering Sea winter was seriously compromised before it set out on its final, fatal voyage, according to a Coast Guard report released Sunday that blamed the captain and the owner of the crab boat for failing to ensure safety.

The Marine Board of Investigation detailed a series of missteps the Coast Guard found led to the deaths of all six crew on Feb. 11, 2017, just off the Bering Sea island of St. George. The panel also uncovered weaknesses in a safety-oversight system set up to prevent such fishing-industry disasters.

-- The Destination, when it left port, was overloaded and did not meet minimum stability standards required by a federal regulation.

-- The captain set out in freezing spray with a fatigued crew that failed to remove a heavy buildup of ice on the hull and gear.

-- A hatch was believed to have been left open, a situation that would have allowed rapid flooding when disaster struck after 6 a.m., after the boat left the lee of an island and encountered rough seas.

"Within a [matter] of minutes, the vessel started to capsize and sink ... the crew had very little time, if any, to react," the report states. "It would be a challenge for any crewmember or fisherman to conduct emergency broadcast radio calls, don a survival/immersion suit and deploy the liferaft in this short period of time."

Captain Jeff Hathaway, Kai Hamik, Charles Glen Jones, Larry O’Grady, Darrik Seibold and Raymond Vincler died in the worst Alaska crab-boat disaster in more than a decade. Their bodies have not been found.

[Related - No Return: The final voyage of the crab boat Destination]

The sinking stunned many in the Bering Sea crab fleet, which had substantially improved its safety record from the 1990s, when the deaths of more than 70 crew members gave momentum to reforms. It prompted the Coast Guard to form the three-person marine board -- the highest level of marine-casualty inquiry -- to understand what happened and to make recommendations to advance safety.

The 138-page document was made public Sunday after a private Saturday meeting that Coast Guard officials scheduled in Seattle for the families of the lost crew.

The board found that the Destination's problems resulted, in part, from a load of 200 crab pots that were heavier than indicated in an out-of-date 1993 stability booklet that offers crucial safety information about how to load the boat. The board recommended that the Coast Guard determine if civil penalties should be assessed against the boat's owner for failing to provide the captain -- as required by federal regulation -- with accurate stability instructions.

The board also noted that a 2016 dockside safety exam conducted by a surveyor failed to scrutinize the boat's stability. The exam was accepted by the Coast Guard but the board recommended -- and the commandant agreed- that it should now be rejected so that surveyor does not conduct any more exams until he receives "remedial training. "

The boat is owned by Destination Inc., a company formed by David Wilson, who lives north of Seattle, and his brother Louis Bernsten. The alleged violations of the regulations will be referred to the Coast Guard's Anchorage sector for a possible enforcement action, wrote Rear Admiral J.P. Nadeau, the Coast Guard's assistant commandant.

The report also says Hathaway, the captain, added to the stability problems by improperly putting bait atop the pots, which was not allowed in the loading instructions that also required the boat's hatch to be secured.

The findings led in the marine board to make 15 recommendations. Nadeau accepted seven, partially concurred with two and did not agree with six.

Recommendations Nadeau rejected called for updating federal safety regulations to specify the weight of crab pots and the risks of ice.

He also turned down recommendations that called for regulations to require boat owners to maintain records of weight changes to their vessels, notify the Coast Guard when major changes are made on a boat, and to require owners and captains to develop policies to address crew fatigue.

Capt. Lee Boone, who spoke Sunday to reporters, said the commandant's position was that existing regulations were sufficient to prevent the tragedy. The "missing piece was compliance."

Nadeau also rejected a suggestion for a broader audit of the nation's fishing fleets to look for stability problems that could put boats at risk.

"There is not sufficient evidence in this report to conclude additional oversight is needed across the entire fleet of commercial vessels," Nadeau wrote.

Family members said their Saturday meeting with the Coast Guard was somber, at times tense, stretching from morning to deep in the afternoon.

Some questioned why the Coast Guard would not pursue criminal penalties against the boat's owners. "Six people lost their lives. This is just not right," said Gayle Andrew, mother of Destination crewman Darrik Seibold.

Hannah Cassara, daughter of the captain, said the families "didn't hold back on their questions, and I think this is probably as close to closure as we will ever get."

The Destination sank at the start of a winter snow-crab harvest as weather forecasts called for heavy freezing spray that would form ice on boats.

Search efforts recovered a life ring, debris and an EPIRB -- emergency position indicating radio beacon -- that gave off a distress signal when the boat went down. But there were no signs of the crew or the Destination's life raft that was supposed to break free of the boat in event of a disaster and give the crew a chance of survival. The marine-board team said there was not enough evidence to determine if the raft launched properly.

Later, in the summer of 2017, a sonar image taken by the crew of a federal research vessel located the Destination, lying on its side more than 250 feet down on the ocean floor.

Hathaway was a veteran captain who had served on the Destination for 23 years, and he had an experienced crew who -- after a long season catching cod -- were getting a late start on the crab season. His boat was scheduled to deliver crab to a processing plant on the Pribilof Island of St. Paul. And, in radio communications with another skipper, Hathaway was concerned it would be hard to catch the boat's quota by a Feb. 25 plant shutdown.

The National Transportation Safety Board also investigated the accident, releasing a report in July that found the accident was caused by Hathaway's decision to head out in hazardous conditions, and then -- once at sea -- failing to have the crew combat the ice buildup that helped make the boat disastrously top heavy.

Some family members bridled at the NTSB singling out Hathaway.

"If anyone wants to criticize my husband, they can soak on this," said Sue Pierce Hathaway, the captain's widow, in an email to The Seattle Times that provided a memorial tribute, calling her husband "The best Sea Captain/Crab Fisherman -ever who respected and loved his crew."

A Coast Guard stability analysis found that the Destination's margin of safety had been eroded by changes made over the years to the gear and the vessel, such as adding a bulbous bow in 2012.

The Destination marine board is the latest in a long line of Coast Guard investigations into the fishing industry, where crew jobs rank as one of the most hazardous occupations in the nation. One of the most wide-ranging reports -- triggered by 11 deaths in the East Coast clam and conch fleet -- was released in 1999.

That report stated: "The history of fishing vessel safety has been an ongoing struggle between the rights of fiercely independent individuals willing or resigned to accept the hazards of the profession, and of those from within and outside of the industry who attempt to mitigate the extreme dangers of retrieving the ocean bounty. "

Dylan Hatfield, a former Destination crewman who lost his brother, Darrik Seribold, and close friend, Kai Hamik, in the sinking, still has questions about what happened that early February morning.

"There is still no accountability," Hatfield said.

He doubts crew members were so fatigued that they failed to remove ice. That's a job, he said, that typically got done no matter how tired anyone was.