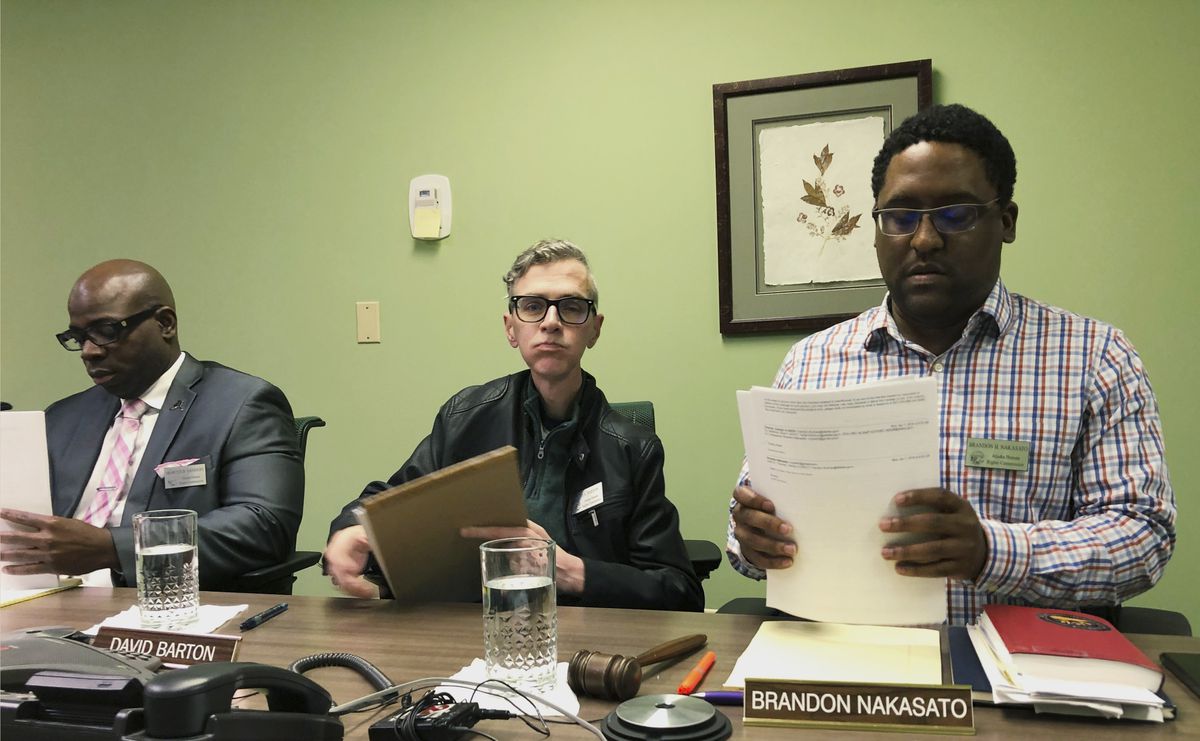 The chairman of the Alaska human rights commission submitted his resignation after the state agency found itself in the middle of a controversy involving its executive director.

The commission suspended Marti Buscaglia on Friday for 15 days after she complained on the commission's Facebook page about a "Black Rifles Matter" sticker she saw on a pickup truck in the building's parking lot and believed to be racist.

On Monday, she submitted her resignation, which is effective when the 15 days end.

Commission chairman Brandon Nakasato announced he was quitting after Buscaglia gave notice. He said his resignation, effective May 1, was connected to the sticker uproar and Buscaglia's actions.

"I resigned because I think new leadership is necessary for the commission to move forward from this controversy," Nakasato said in a Facebook message to The Associated Press.

He said the commission has an important and vital mission, "and if me stepping down can help to restore public trust in our ability to achieve that mission, then that is a small price to pay in service to a greater cause."

Asked how new leadership would allow that change, Nakasato said he wasn't yet sure. But he said he trusts the judgment of his fellow commissioners and the staff "in charting a path forward that demonstrates to the public that Marti's actions do not represent the best methods to achieve the commission's mission."

He said his decision was voluntary and he was not pressured to resign.

Nakasato was one of five commissioners who voted to suspend Buscaglia. Dissenters were David Barton and Marcus Sanders, who said he voted against the suspension because he didn't consider it severe enough.

Vice chairman Freddie Olin IV also has resigned from the commission but says his upcoming departure isn't related to the sticker controversy.

Instead, he says his resignation, also effective May 1, came after his fiancée was accepted into the Massachusetts Institute of Technology Indigenous Language Initiative graduate program. Her intent is to revitalize Inupiaq, he wrote in his resignation letter.

Last month, Buscaglia saw the rifle sticker on Brent Linegar's vehicle and posted a photo of it on the commission's Facebook page asking, "In what world is this OK?"

Linegar, who has a plumbing and heating business, has said the truck was his and that his company was doing repairs at the building that day. He has said that he understood the stickers to be about gun safety and "Second Amendment awareness."

Buscaglia said she removed the post amid strong reactions, writing on Facebook that it offended many gun owners who interpreted it as the commission being against the right to own guns, which she said was not the case.

"Our concern was with the connotation of the statement to the Black Lives Matter movement," the new post read.