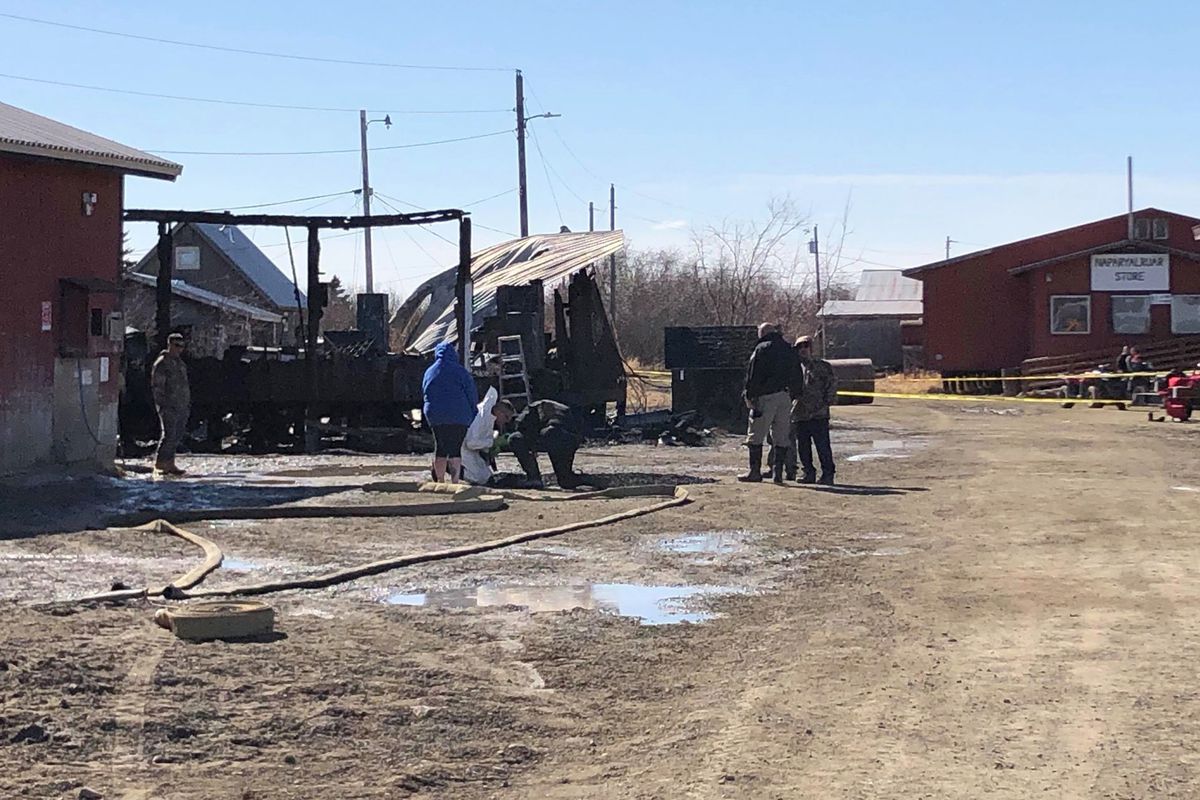 A day after a young man and woman in Napakiak died locked in their cells as the village jail burned, many questions remained unanswered about the terms of their incarceration and the safety of the ad-hoc holding facility and others like it.

Residents of the Kuskokwim River village tried to fight the fire by pumping river water and using a garden hose to extinguish the flames, according to Alaska State Troopers. A guard was severely injured trying to save them. They had been arrested by a village police officer employed by the tribe, said troopers spokeswoman Megan Peters.

The deaths have focused attention on locally run village jails, a crucial but lightly regulated feature of the criminal justice system across rural Alaska. The incident was the first time in more than 30 years a person has died in a fire in an Alaska jail, according to troopers.

A family member of one of the victims described the events that led up to Sunday’s fatal fire.

On Saturday, White had been picked up by a village police officer for driving a four-wheeler while intoxicated, said Miranda White, her older sister.

“She wasn’t charged with anything," White said. "They were holding her until she kind of sobered up.”

White said her sister and Parka were close friends. But to her understanding, Parka had been taken into custody separately, also after drinking. Family members of Parka, who was 22, couldn’t be reached Monday. Parka’s brother posted in an online fundraiser that he was working on collecting funds to get back to Napakiak for the funeral.

There is no record of an operating under the influence charge, or any other recent charge, filed against White or Parka in online court records.

A jail guard told troopers the fire started on a mattress inside the cell of one of the detainees. It remains unclear how the means to start a fire got inside the cell.

One of the two jail guards in the facility when the fire started was severely injured trying to unlock the cells, according to troopers. The guard, who has not been named, was flown out of state for treatment of his injuries, said Peters.

Investigators from the Alaska State Troopers, Alaska Bureau of Investigation and the state Division of Fire and Life Safety were in Napakiak on Monday, Peters said.

It is not clear when the friends entered the cells in the building that serves as both a temporary jail and offices for the village police officers, who are employed by the local tribal government. Troopers have not confirmed when or why they were detained.

“I don’t pretend to know the legalities,” he said. “It escapes review, pretty much. It’s a local practice.”

Angstman said virtually every village has a small jail cell or holding area where people wait after they are arrested to be transported to Bethel for their first court appearance, which is supposed to happen within 24 hours of an arrest.

Miranda White said people are sometimes held in Napakiak “when people call to complain about someone” who is intoxicated and causing trouble, she said.

Under Alaska’s law, people can be picked up and held in “protective custody” for a maximum of 12 hours if they are too intoxicated to care for themselves. In Anchorage and other cities, public safety patrols take drunk people to a “sleep off center” until they are sober enough to leave.

The holding cells in small communities serve as a sleep-off center, Angstman said. Sometimes, even visitors passing through are offered a spot to sleep in one if there’s no other accommodation in town.

White said she’d been inside the Napakiak public safety building herself. There were multiple jail cells with metal bars, locked with padlocks, she said.

“They’re supposed to make sure they have nothing in their pockets, for suicide watch. I’ve been taken into protective custody,” White said. “They did make sure I had everything out of my pockets.”

White said her family wants to know how a fire could have started without anyone noticing. She wants to know if the building had a working fire detector or fire extinguisher.

“What I’m wondering is why they couldn’t open the jail cells right away,” White said. “If they had the keys, why didn’t they just open it?”

Last summer, the Association of Village Council Presidents visited Napakiak as part of an extensive tour to document the state of village public safety infrastructure. Many facilities were old, run down and lacked safety features, the survey found.

Small facilities such as the one in Napakiak are not subject to the same stringent fire regulations as jails occupied by more than six people, said Alaska State Fire Marshal Richard Boothby.

They are not regularly inspected, Boothby said. He said that after the jail fire investigation is over, it’s likely that people may have suggestions about how to make all village jails safer. Those suggestions will probably cost money.

“Every time you get more restrictive with requirements it costs money. We can require a sprinkler system -- but in a village without running water, how would that work?” he asked. “The question is how do we provide a level of safety with what we have.”

Rep. Tiffany Zulkosky, a Bethel Democrat, said the tragedy in Napakiak highlights the fact that local governments in rural Alaska communities have been asked to provide facilities, like jails, provided by the state elsewhere.

“What we see through this particular situation is that communities throughout rural Alaska have been in that position for a long time,” she said.