As wildfire season gets underway, Alaska seeks $2 million from feds to take down beetle-killed trees 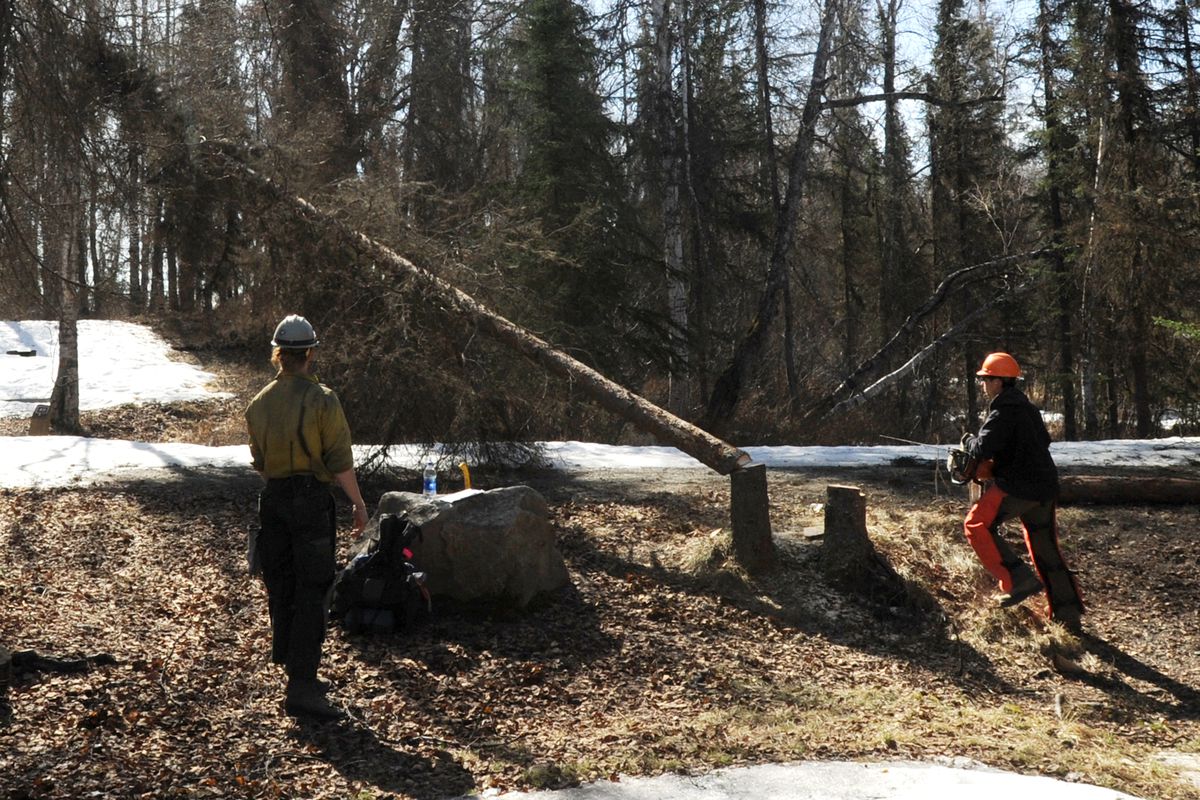 Brian Selmer, left, with the Pioneer Peak Interagency Hotshot Crew observes as Jerid Blair of the Alaska Department of Transportation fells a spruce bark beetle-killed tree while getting chain saw training in the South Rolly Lake Campground on Wednesday, May 1, 2019. (Bill Roth / ADN)

Brian Selmer, left, with the Pioneer Peak Interagency Hotshot Crew observes as Jerid Blair of the Alaska Department of Transportation fells a spruce bark beetle-killed tree while getting chain saw training in the South Rolly Lake Campground on Wednesday, May 1, 2019. (Bill Roth / ADN)

The saw went silent, replaced by the crack of splintering wood.

The ongoing spruce beetle infestation that’s reddened about a million acres of forest in Alaska, mostly in Mat-Su, has closed the popular campground for the summer as well as the Byers Lake Campground to the north in Denali State Park.

State foresters are hoping to get $2 million in federal funds to cut down beetle-killed spruce. State parks officials say that in the meantime, they don’t want campers hit by falling trees.

But the dead spruce plunging to the ground Wednesday was supposed to fall — into a small, brushy dip and onto a campground loop road.

Hickle, who works for the Alaska Department of Transportation in Palmer, was one of 22 student sawyers and instructors in a training Wednesday led by Alaska Division of Forestry wildland fire bosses at Nancy Lake State Recreation Area.

With a whump, the dead spruce hit the mark.

“Look at that! Got it right where we wanted it,” said Gregg Pralle, a land manager with the Matanuska-Susitna Borough.

The borough also is looking to take out dead spruce in campgrounds, given the extent of the beetle epidemic, Pralle said. “It’s all over. It’s everywhere.”

The situation at Byers Lake is even worse than at South Rolly, said Ryan Brooks, who participated in the training and runs maintenance at Denali State Park.

“This looks like nothing compared to that," Brooks said.

The training, which targeted state wildland firefighters but also included other agencies, came as Alaska’s fire season kicks off and the ongoing beetle outbreak picks up after the warmest March on record.

Fire potential for May is forecast as above normal along main road corridors, according to a new outlook from the National Interagency Fire Center in Boise. The potential is forecast to return to normal in June.

Forestry officials hope to hear by next week the result of the state’s request for $2 million in “hazardous fuels reduction” money from the U.S. Forest Service, according to Mat-Su area forester Steve Nickle. The money would fund work removing beetle-killed spruce, mostly in campgrounds and on state lands near them, in Mat-Su and on the northern Kenai Peninsula, where the beetles have also spread, Nickle said.

Beetles have already killed so many trees that state parks officials closed campgrounds at Nancy Lake and Byers Lake. Officials worried that people at the campgrounds, with more than 100 sites between them, could be hurt by falling rotten trees.

Right now, the campgrounds are closed indefinitely and could be closed through summer, according to Stuart Leidner, Mat-Su parks superintendent. Crews are clearing day-use areas in both parks.

The federal funding is necessary to do the scale of clearing needed to reopen the campgrounds, Leidner said. And then any cutting, whether it’s mechanized or by hand, would need to protect roads, camp pads, tables and latrines.

Humans have caused most of the fires in the state so far this year. Dry conditions persisted into early this week, though rain or cooler weather in the forecast is expected to reduce fire danger across much of the state.

Over the past week, higher-than-normal temperatures combined with earlier-than-normal snow melt and lack of precipitation “resulted in extremely volatile fuel conditions,” according to a Division of Forestry update. Burn suspensions remained in place in Delta and Tok due to the dry conditions.

As of Thursday, 81 fires had burned almost 3,400 acres in the state, according to the Alaska Interagency Coordination Center. Just one of those fires was started by lightning rather than people.

Smoke from a 3,000-acre fire about 7 miles southwest of Fort Greely was expected to drift into Delta Junction and Tok.

The fire was burning in grass and downed trees in the location of a 2013 fire in the Donnelly Training Area on the west side of the Delta River, according to the BLM Alaska Fire Service. It was in monitor status because of unexploded ordinance “making it too dangerous to place anyone on the ground,” stated a fire update Wednesday. "It is burning in a limited protection area and is not immediately threatening any resources.”

Rain or possibly snow was in the forecast for Thursday evening. The cause of the fire was under investigation.

The 2.5-acre Bluff Drive Fire in Ninilchik on Saturday forced the evacuation of four homes, one of which was damaged as the fire passed by.

Smoke jumpers with the BLM Alaska Fire Service were deployed for the first time this year Saturday for a 3.5-acre fire in Western Alaska that was reportedly spreading fast and potentially threatening the village of Manokotak. Six more smoke jumpers helped extinguish a 195-acre fire started by a snowmachine on the tundra just outside Unalakleet.

In Mat-Su, state forestry firefighters responded to six burn barrel and debris burn escapes over the weekend that resulted in a damaged trailer home, destroyed shed and a burned fence. Firefighters in Tok put out an escaped lawn burn Sunday in the village of Northway.

By Wednesday, state fire crews and a helicopter were mopping up a 3.5-acre wildfire on Ahtna Inc. lands near Glennallen, according to a Division of Forestry update.

Correction: A previous version of this story incorrectly stated that Ryan Brooks is a Denali State Park ranger. Brooks runs maintenance at the park.