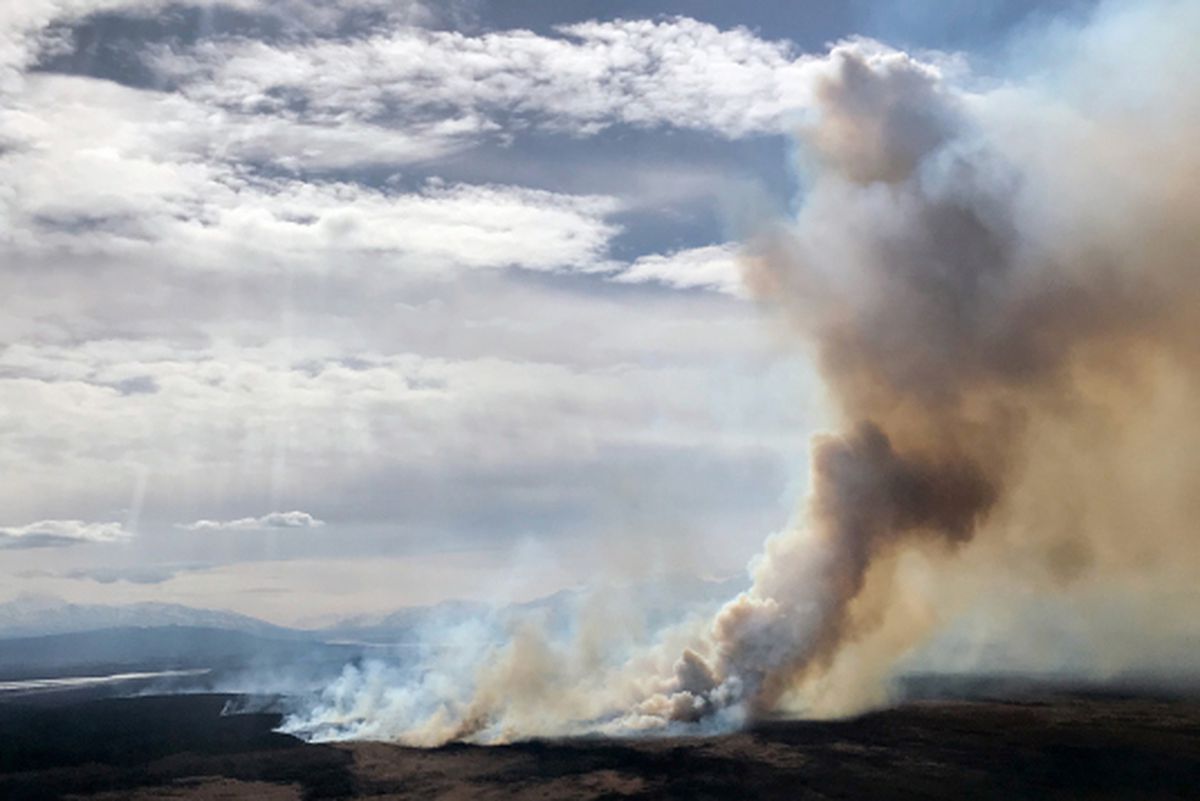 The Oregon Lakes Impact Area Fire, photographed last week as it burned through grass and downed trees from a 2013 burn. The fire is now estimated at more than 6,600 acres and a federal management team is taking over planning. (Photo by Collins Bonds / BLM AFS

The Oregon Lakes Impact Area Fire, photographed last week as it burned through grass and downed trees from a 2013 burn. The fire is now estimated at more than 6,600 acres and a federal management team is taking over planning. (Photo by Collins Bonds / BLM AFS

Federal fire bosses are plotting a strategy to battle an unusually large early-season wildland fire near Delta Junction once it leaves military lands, where it’s already scorched thousands of acres.

The Oregon Lakes Impact Area Fire — named for a munitions-training range within the Donnelly Training Area — was burning across nearly 7,000 acres of military land about 11 miles south of Delta by Monday morning, doubling in size since last week despite cooler, wetter weather.

That’s the largest active fire in Alaska — and it’s barely May.

The National Weather Service issued a red flag warning for dry and windy conditions in Deltana and the Tanana Flats Tuesday, the fire service announced Monday afternoon. Winds are expected to push the fire to the north, possibly threatening state timber along the Delta River and Delta Creek.

The fire was burning in a military training area with unexploded ordnance on the ground, making it too dangerous to put firefighters or low-altitude aircraft nearby, officials say. The area has been in use since the late 1940s.

Army and Air Force training missions shot mortars and artillery and dropped bombs into the ground at Oregon Lakes, according to U.S. Army Alaska spokesman John Pennell. The ones of concern misfired and didn’t go off.

[As wildfire season gets underway, Alaska seeks $2 million from feds to take down beetle-killed trees]

The fire is burning mostly in tall, dry grass and downed trees from the 2013 Mississippi Fire on the west of the braided Delta River. That fire started in May but rekindled and grew to nearly 70,000 acres by August, threatening homesteads and cabins in an area north of Delta known as Whitestone.

Then too, fire officials had to wait until the flames left military land before they could work to put them out.

Ipsen credited the unusually warm spring -- March was Alaska’s warmest on record -- as well as unseasonable dry conditions for fueling the fire.

The National Interagency Fire Center in Boise warned at the start of the month of above-normal fire danger in Alaska through this month, especially along roadways.

There are no homes near the Oregon Lakes fire. But it is “at least a couple miles” from a 1,500-acre state parcel of white spruce saw timber, according to Tim Mowry, a Fairbanks-based public information officer for the Alaska Division of Forestry.

As of Monday morning, the fire was estimated at 6,672 acres and smoldering in spruce with only a 5 percent active perimeter, according to an update. But winds were starting to pick up during a recon flight Monday around mid-day.

The Alaska Fire Service is deploying a team of high-level fire managers to develop a strategy to actively fight the fire if it moves off military lands.

“When the wind picks up, there’s potential for significant fire growth,” Ipsen said. “That’s why we’re getting the team in there now, because we’re anticipating this could get very active here in the next couple days.”

The Delta River drainage brings “known challenging weather patterns that could cause the fire to persist throughout the summer,” according to a Sunday update. The team will plan for an opportunity to launch suppression tactics once the fire moves out of the military impact areas.

The team, composed mostly of Alaskans, will stay in Delta Junction.

Residents of that city of just under 1,000 on Monday weren’t too concerned about the fire reaching their homes, city administrator Mary Leith said.

It’s burning on the other side of the Delta River, Leith said. “If it gets running and it’s headed toward Whitestone again, people have some concerns. But it’s not right here up close yet because the river is our buffer."

Still, Delta residents are wary of “breathing smoke all summer," as they did in 2013, she said. “So if the military could please get this under control we’d greatly appreciate it. I know they’re working now with Forestry and BLM so hopefully this will all work out.”