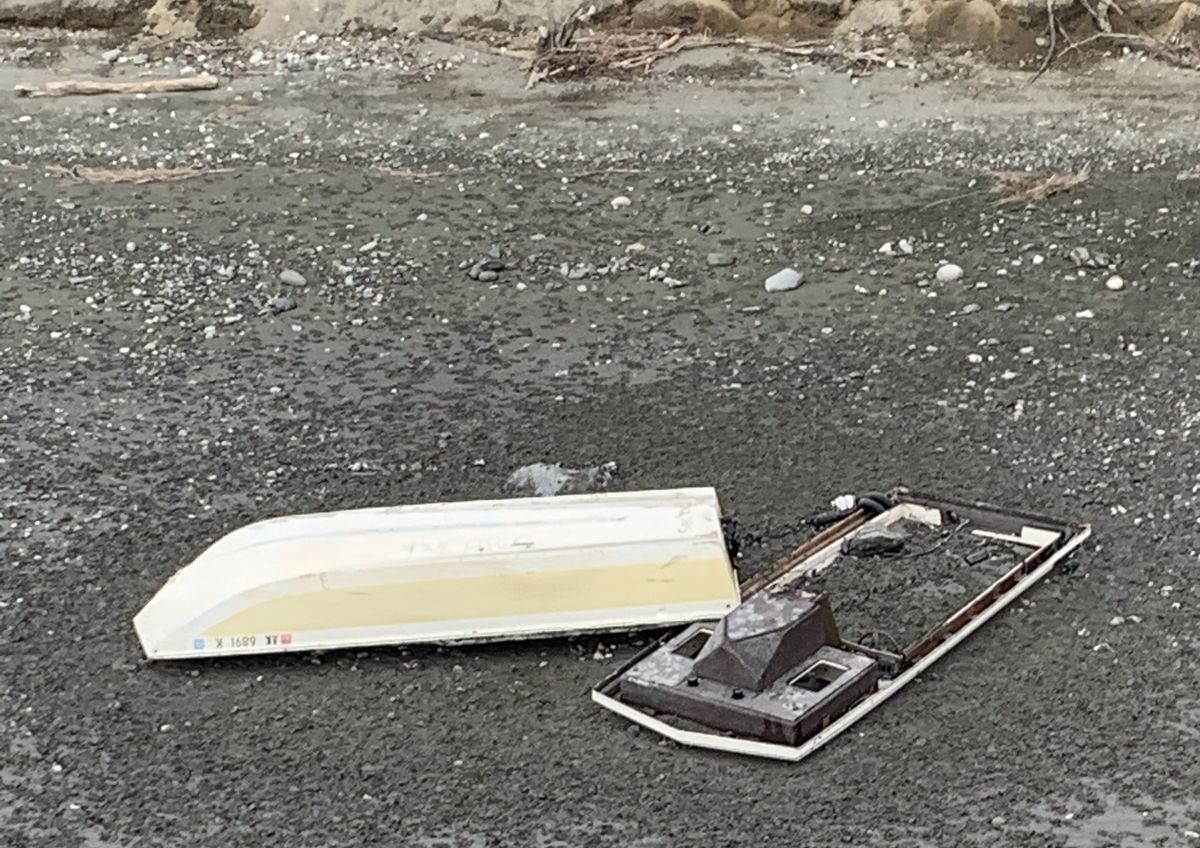 The Coast Guard says it called off a search Tuesday night for whoever may have been manning an abandoned skiff that washed aground on the west shore of the Knik Arm north of Anchorage.

The 19-foot, white-hulled skiff was found overturned about a mile east of the Goose Bay Airport, near Point MacKenzie, with the keys still in the ignition Tuesday afternoon, the Coast Guard said. People who had seen the boat told the Coast Guard it had been there since at least Sunday, but it wasn’t until 1 p.m. Tuesday that someone reported it, according to the Coast Guard.

The skiff appeared to have holes in its hull but there were no signs of marine debris on its exterior, indicating it hadn’t been adrift for a very long time, said Petty Officer 1st Class Nate Littlejohn, a spokesman for the Coast Guard’s Anchorage command center.

The boat’s interior liner had also separated from its hull, Littlejohn said.

Multiple agencies began looking for the person who may have been in the boat before it washed ashore, fearing they had taken it out without telling anyone where they were going, the Coast Guard said in a previous statement. The Coast Guard called off the search, which spanned 388 square miles, about nine hours later, around 10:15 p.m.

No one associated with the skiff had been reported missing or overdue, according to the Coast Guard.

“Details discovered during the investigative processes led us to believe that nobody associated with the vessel was in distress,” Senior Petty Officer Erik Patterson said in the Wednesday statement. “After an extensive search yesterday afternoon into the evening, unless we hear that someone associated with this vessel is unaccounted for, this case is suspended for search and rescue.”

The boat’s registered owner told investigators he’d given it away to a “friend of a friend," and investigators haven’t received any indication the boat was stolen, Littlejohn said.

“While it is still unclear if this vessel was intentionally abandoned or if it drifted away accidentally, situations like this expend the taxpayers’ money in exhaustive search and rescue expenses,” Lt. Junior Grade Angella Thuotte said in an emailed statement. “If a boat is registered in your name, be sure to file the required paperwork if you give it away or sell it."

Thuotte also cautioned boat owners to label their vessels with their contact information and ensure any boat kept in the water or on shore is secured so that it won’t drift away.