Both risky and rewarding, floatplanes offer ticket to remote Alaska 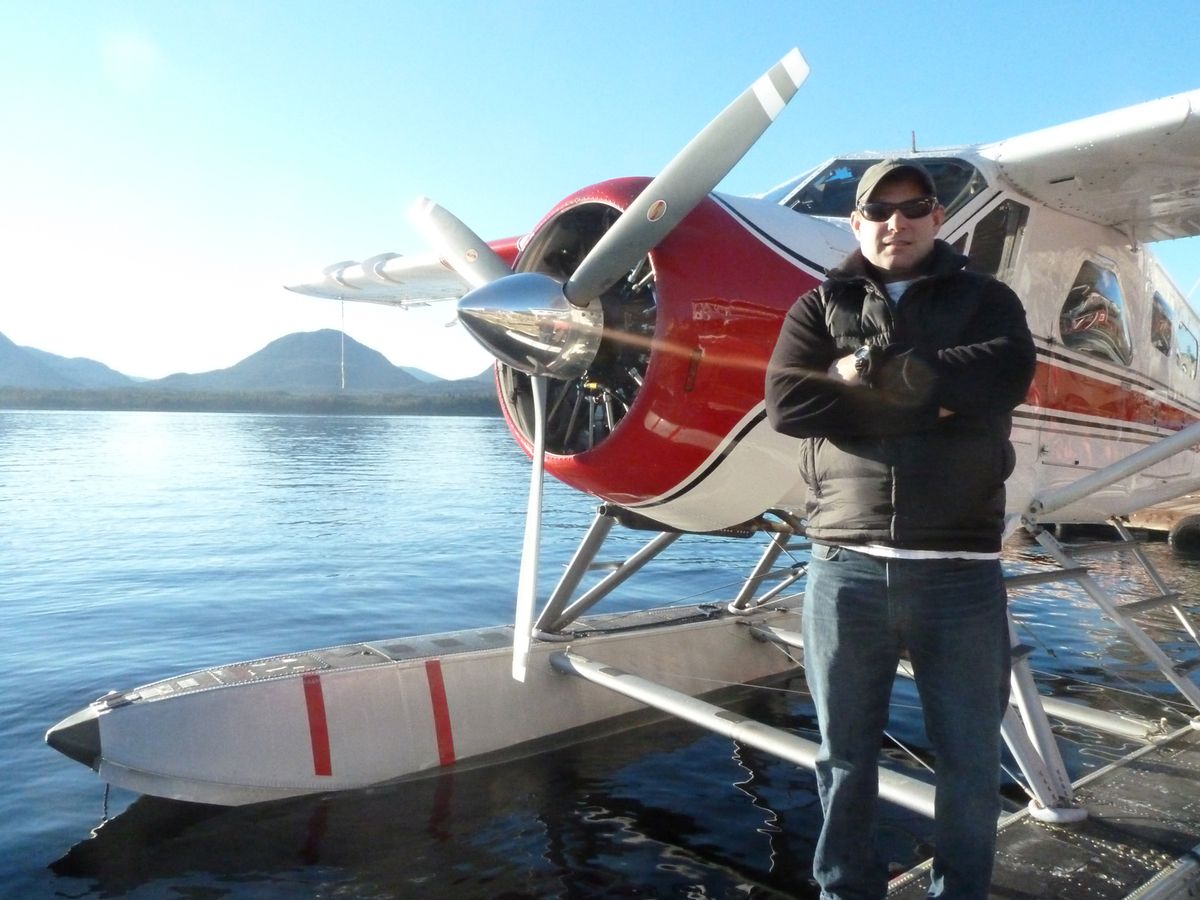 Randy Sullivan is a float plane pilot, based out of Ketchikan, Alaska. Three years ago, he bought his own De Havilland Beaver and now ferries tourists over southeast Alaska. The job is dangerous and the profit margins slim. (Los Angeles Times)

Randy Sullivan is a float plane pilot, based out of Ketchikan, Alaska. Three years ago, he bought his own De Havilland Beaver and now ferries tourists over southeast Alaska. The job is dangerous and the profit margins slim. (Los Angeles Times)

KETCHIKAN -- Randy Sullivan understands the risks of landing his floatplane on a rolling liquid runway. On a cold late-autumn afternoon, he cruises at 3,600 feet, searching for just the right approach to Mirror Lake, a glassy speck amid hundreds of miles of forest.

Experience has taught him to look for such threats as submerged logs and rocks or rogue wind gusts that could toss his sturdy craft like a paper airplane. He targets a sunlit stretch of lake water, setting down his seven-seat 1952 de Havilland Beaver as delicately as you'd place a teacup onto a saucer.

"You just pull up on the nose," he says, "and steer right onto the water."

He shuts off the big nose propeller and the plane slowly glides to a stop; he has completed the first segment of a 90-minute flight from the town of Ketchikan, his final foray of another season of adventure in the sky.

Sullivan, 41, performs a dangerous job in a place that can be perilous. Throughout southeastern Alaska, with its countless bay-locked burgs and rough-hewn homesteads, floatplanes assume the role of taxicab, ambulance, mail carrier and supply truck, touching down in narrow causeways and turbulent inlets far from any tarmac.

Some Alaskans say the agile aircraft should be designated the state bird. Alaska Airlines, a top U.S. commercial carrier, began as a group of floatplanes. With their ability to make short takeoffs and landings, floatplanes have for years whisked backcountry hunters and fishermen into the relative comforts of this frontier town, itself an outpost with only 8,100 full-time residents and 31 miles of paved highway.

Such feats come at a human cost. In the last three decades, 697 floatplane accidents have killed 258 people across Alaska, according to statistics from the National Transportation Safety Board. The worst year was 1982, when 24 people died, an average of two a month. Pilots are almost always among the dead.

Some Alaska lakes are named for floatplane pilots who crashed there. Says Sullivan: "You never want a lake named after you."

Alaskans argue over which is more brazen: floatplane aerialists like Sullivan or wheeled bush pilots who set down on short strips and gravel bars. It's considered a tie.

Ketchikan historian Dave Kiffer calls floatplane pilots the glue that holds Southeast Alaska together. “In this part of the state, you don’t just drive to the next town,” he said. “These folks face danger on every flight. If you take chances, they will eventually catch up with you. There’s an old saying here: ‘There are old pilots and bold pilots, but no old, bold pilots.’”

An hour before reaching Mirror Lake, Sullivan had taken off from Ketchikan, the floatplane's skyward lift smooth, almost imperceptible. Within minutes, he revels in a bird's-eye view of untamed beauty.

On a good day, when the weather cooperates, the pilot can see for 100 miles. Passing over Misty Fjords, a 2.3-million-acre national monument, he peers down on saltwater passageways that run as deep as 2,000 feet. He may see brown bears crossing rivers, moose or wolves.

As with many veteran Alaska aviators, his travels have shaped a keen backwoods humor: Sullivan has flown to so many isolated locales, camping in such primitive places, he now considers himself an outhouse connoisseur.

Sullivan grew up in an era before global positioning systems. He lived with his stepfather, who worked in an isolated logging camp. When Sullivan was 12, he often hitched rides on floatplanes into Ketchikan, 40 miles distant, to practice with a local football team.

He dreaded those flights, often piloted by mavericks who flew into clouds without knowing what was on the other side. Sullivan soon adopted the old logging camp rule: Never fly with a pilot you don't recognize; this was no territory for untested newcomers.

Years later, Sullivan was a Ketchikan dockworker, loading supplies onto floatplanes bound for logging camps, when he saw the planes in a new light: The old-style aerial cowboys had been replaced by a new breed of pilot with updated navigation equipment.

One day, he watched a floatplane taxi onto an inlet on an unusually calm morning as beams of sunlight shot down upon the water. "I thought, 'Isn't that just cool?' How many people can do a job like that?" That was the moment, he recalls, when he decided to become an Alaska pilot.

Sullivan graduated from flight school in Oklahoma and worked as a floatplane pilot instructor. Back in Alaska, he flew for Ketchikan floatplane outfits, carrying mail to settlements like Hyder, population 75, about two miles from British Columbia. He dropped hunters into the wilderness. When he picked them up days later, some nearly hugged him.

He also once rushed a young mother in labor to Ketchikan from a nearby island. Despite "tree-topping it to town at 115 miles per hour," he said, the baby was born in Sullivan's plane.

Ever-present is the capricious Alaska weather that can quickly turn a sunny day into a nightmare. During one storm, with winds of 50 mph, Sullivan and nine passengers took off from a bay stirred by 3-foot swells. He made it out. "But my hands were shaking with adrenaline," he says.

Now Sullivan's wife, Julie, insists the couple never fly together without their two young children; she doesn't want an accident to make them orphans. Each time Sullivan heads for the docks, she gives him a kiss — a gesture of both love and good fortune.

'Come Fly With Me'

In 2011, Sullivan spent his family's savings — $500,000 — on the de Havilland Beaver, a plane he calls his Harley-Davidson for its crisp and reliable airborne performance. The aircraft is one of 1,657 built for the U.S. military between the late 1940s and 1960s. Sullivan's website home page features a black-and-white picture of the 1952-vintage plane, the 237th to come off the assembly line.

"The Beaver is not a dainty airplane," he says. "It is a large, barrel-chested craft that looks quite capable of eating Cessnas as mere snacks."

Most regular delivery routes to outlying towns are spoken for by more-veteran fliers. The once-ubiquitous logging camps that employed numerous float pilots are gone, leaving Sullivan to vie for Alaska's newest airborne clients: the hundreds of thousands of tourists who dock here on seasonal cruise ships, along with sportsmen charters and bear-viewing excursions.

In summer, when visitors are plentiful, he flies seven days a week, taking off and landing in the busy Tongass Narrows just offshore from Ketchikan's rustic downtown — dodging barges, pleasure boats, personal watercraft and other planes.

While larger firms can undercut prices, Sullivan must earn enough to cover an overhead that runs into the hundreds of thousands of dollars every year. The constant stress sometimes keeps him awake at night.

In the air, Sullivan usually plays the song "Come Fly With Me" by Frank Sinatra on his iPod:

"Once I get you up there where the air is rarefied / We'll just glide, starry-eyed."

"You've got to have Sinatra," he says. He also listens to flight-themed songs by Wings and Blind Pilot.

A former waiter, he talks up clients, telling jokes, calling out the lakes below, making passengers feel at home. He charges $239 per seat for a two-and-a-half-hour tour, and knows a review on the website Trip Advisor can make or break him.

But Sullivan realizes he's more than any wise-cracking tour guide. Bad weather — and there's plenty of it — can turn him into a lifesaver. Coping with danger separates the piloting pros from the newcomers.

"The trick is how you handle the scary moments," he said. "Can you buckle down and figure things out?"

John M. Glionna is a reporter with the Los Angeles Times.