NTSB: One floatplane descended more than 500 feet before midair collision that killed 5 cruise passengers and pilot 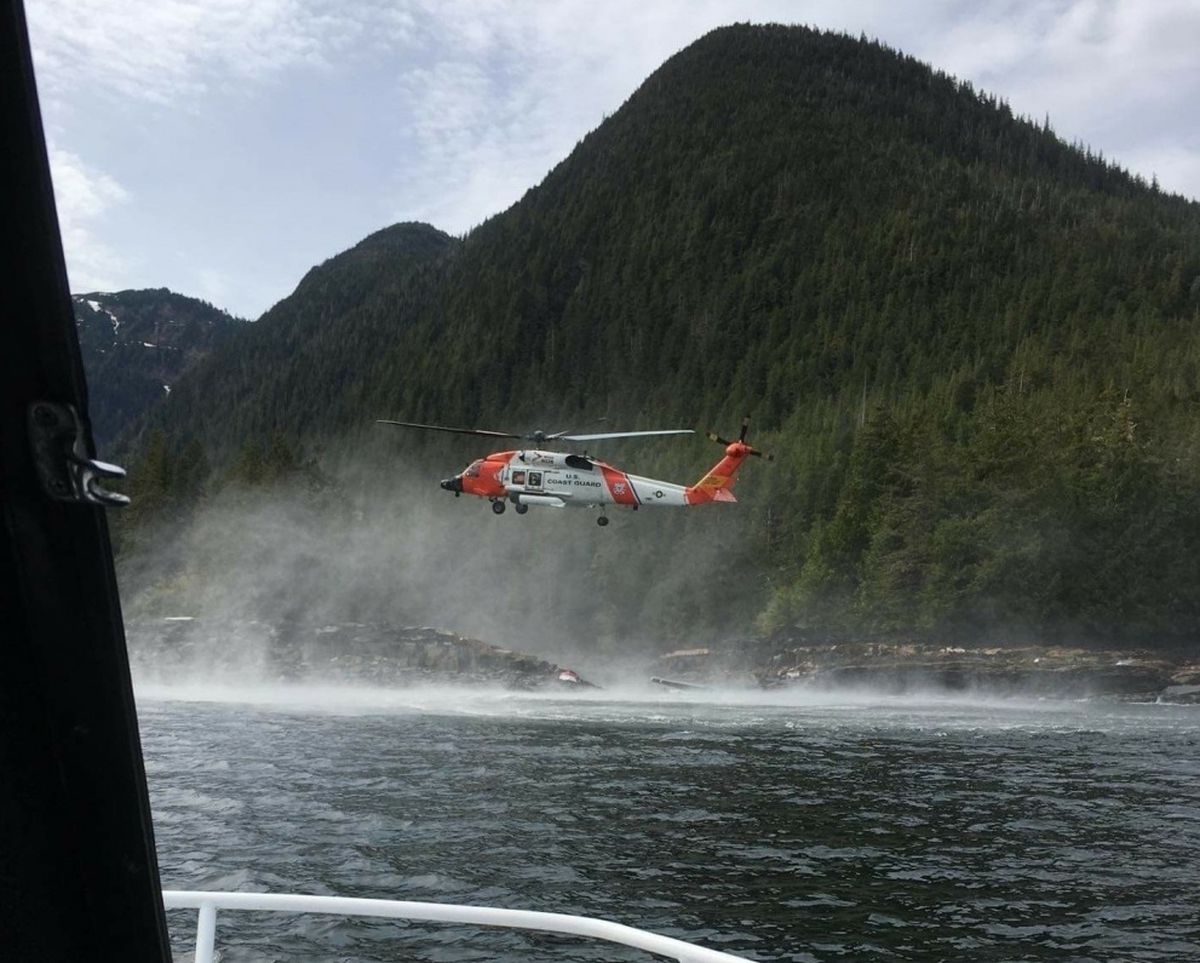 A Coast Guard Air Station Sitka MH-60 Jayhawk helicopter crew hovers while searching for a survivor from a report of two aircraft colliding in George Inlet near Ketchikan, Alaska, Monday, May 13, 2019. Ten of the 11 people aboard one of the planes swam to shore and were rescued by Coast Guard aircrews. (Photo courtesy of Ryan Sinkey via U.S. Coast Guard)

A Coast Guard Air Station Sitka MH-60 Jayhawk helicopter crew hovers while searching for a survivor from a report of two aircraft colliding in George Inlet near Ketchikan, Alaska, Monday, May 13, 2019. Ten of the 11 people aboard one of the planes swam to shore and were rescued by Coast Guard aircrews. (Photo courtesy of Ryan Sinkey via U.S. Coast Guard)

One of the floatplanes in Monday’s midair collision near Ketchikan that killed six people and injured 10 descended more than 500 feet over the course of several miles before the planes carrying passengers from the same cruise ship converged.

That’s according to preliminary information obtained by the National Transportation Safety Board. The information came from flight tracking data, an NTSB spokesman said.

Crews Wednesday began recovering the wreckage of the planes so they can be examined, hauling them up by crane out of the icy waters of George Inlet, NTSB board member Jennifer Homendy said during a briefing on Day 2 of the agency’s investigation.

The crash killed all five people aboard a Mountain Air Service de Havilland DHC-2 Beaver, including pilot Randy Sullivan. One person died in the other plane, a de Havilland Otter DHC-3 carrying 10 passengers and operated by Taquan Air.

Both planes involved in the collision converged as they were flying toward Ketchikan. But it appears Taquan’s larger, heavier Otter started out above the other aircraft, officials say.

The Taquan plane was headed southwest at about 150 mph when it descended from about 3,900 feet to about 3,300 feet, Homendy said.

That descent occurred over several miles, she said. Investigators don’t see anything “abnormal” about the descent, she said.

The Mountain Air plane was on a west-southwest heading toward Ketchikan at about 125 mph, maintaining an altitude of about 3,300 feet, Homendy said.

“The two planes converged between 3,200 and 3,300 feet on the west side of the George Inlet,” she said in a briefing Tuesday, adding later there is no way to make assumptions about the cause of the collision based on that preliminary information. “We still have to recover the planes and then we have to look at those. It takes some significant work to really understand how the two came together.”

The agency Wednesday began interviewing survivors of the Taquan plane, including the pilot, Homendy said.

NTSB has requested flight-track data from the Federal Aviation Administration to match with data from the Taquan’s tracking system, and investigators also hope to find out if there were other planes in the area.

The investigation could include a visibility study, to re-create what the pilots saw and whether there were obstructions in their view, she said. Among other items, the NTSB will also be looking to see if the pilots employed safety equipment allowing them to track other planes around them.

A preliminary report is expected in about two weeks, Homendy said.

The transportation safety boards of Canada and Australia will be parties to the investigation; two of the passengers who died are from those countries. The agencies will offer technical advice and receive facts about the collision, but they aren’t part of the investigation, she said.

Other parties to the investigation will include the Federal Aviation Administration, and Taquan Air, she said.

A Taquan spokesman said the company is not commenting on any part of the active investigation. Taquan is owned by a Ketchikan corporation called Venture Travel LLC.

By Wednesday morning, all four were in “satisfactory” condition, the hospital said: a 63-year-old woman and a husband and wife, both 61, as well as a 67-year-old man originally recovering in the intensive-care unit.

Three additional patients remained hospitalized in fair condition at PeaceHealth Ketchikan Medical Center as of Tuesday evening, according to a Ketchikan Gateway Borough update. Three were released earlier that day.

The crash was the second for Taquan in two years and the company’s fifth fatal accident, including a 2007 crash that killed the pilot and four flightseeing tourists, according to an NTSB database.

Six of the 11 people on board a Taquan flight last year suffered serious injuries when the flightseeing plane crashed into a mountain near Hydaburg. The NTSB found the pilot had turned off a terrain alert warning system.

Taquan on Monday suspended all air operations in light of the crash but resumed scheduled and chartered flights Wednesday “so that Alaskans living in our rural regions have the service they depend on,” the company said in a statement.

“We are fully committed to understanding this incident and the circumstances that led up to it. All of us at Taquan are so grateful that there are 10 survivors on our flight,” the statement said. “Taquan staff is working closely with the Princess Cruises Care Team to assist and meet the needs of the injured survivors while also keeping all family members in communication.”

The collision occurred about 9 miles from Ketchikan, a city of a little more than 8,000 people that swells with more than a million summertime visitors, mostly off cruise ships.

The people involved in Monday’s crash came off the Royal Princess, a 3,600-passenger megaship making an inaugural Alaska voyage from Vancouver to Whittier, where it’s expected to dock Saturday.

Many cruise-goers embark in Ketchikan for sightseeing flights to nearby Misty Fjords National Monument, a rugged wilderness larger than Yellowstone National Park threaded with steep-walled inlets.

Ten Americans involved in Monday’s crash took a flight to Misty Fjords booked with Taquan through Princess Cruises as a shoreside excursion.

The smaller group, two Americans, a Canadian and an Australian, booked their flights independently through Mountain Air Service, a small company owned by Sullivan and his wife, Julie. Sullivan grew up near Ketchikan and worked the docks there until he bought the Beaver in 2011 to start his own air service, according to a 2015 profile.

A team of 14 NTSB investigators are involved in the investigation, Homendy said. They will also examine everything from pilot log books, training and maintenance records to terrain, weather conditions and company operating procedures.

The agency will also look at FAA oversight of the flightseeing companies and “cruise-line sales of air tour excursions,” she said. Neither plane carried voice or data recorders, and neither was required to.

The crash left the Otter mostly intact but flipped over, floats up, in the water near the beach in the Coon Cove area before it sank. The plane was recovered from 75 feet of water and set onto a barge on Wednesday afternoon.

The wreckage of the Beaver fell more than a mile away, in the Mahoney Creek area, officials say. Homendy described a large debris field from the plane stretching 1,000 feet by 3,000 feet, extending from a mountainside and into the saltwater.

Part of the Beaver’s fuselage was still being hauled from the water and placed onto the barge, Homendy said Wednesday afternoon. The planes will be moved to a hangar for the investigation.

“It will take several days to get the additional part of the wreckage," she said, referring to the Beaver.