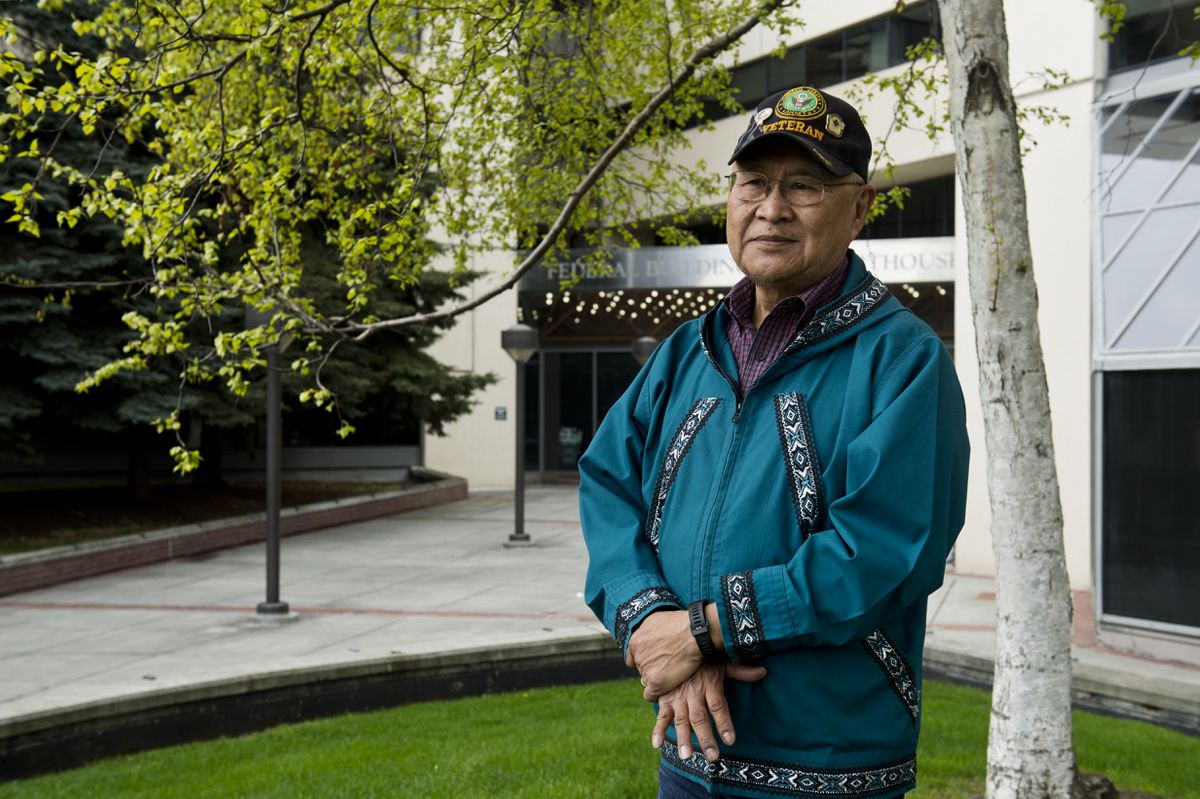 Nelson Angapak is advocating for land allotments for Alaska Native veterans who were serving in Vietnam when the allotment program ended in 1971. Photographed at the Federal Building in downtown Anchorage on May 6, 2019. (Marc Lester / ADN)

Nelson Angapak is advocating for land allotments for Alaska Native veterans who were serving in Vietnam when the allotment program ended in 1971. Photographed at the Federal Building in downtown Anchorage on May 6, 2019. (Marc Lester / ADN)

It took two decades, but the 74-year-old Yup’ik leader from Southwest Alaska has done it -- with help from others, he points out.

Congress in March passed a major lands bill that opens the door for more Native veterans to apply for tracts of land of up to 160 acres. It follows a more limited application period in 1998, an opportunity that many veterans said wasn’t enough.

The allotments were offered to Alaska Natives by the federal government beginning in 1906, after non-Native settlers and miners began arriving in the state and claiming Native lands.

The program’s original restrictions prevented many from applying until the 1960s, as today’s veterans were heading overseas during the Vietnam War era, said Kevin Illingworth, professor of tribal management at University of Alaska Fairbanks.

Nonprofit firms helped many Natives apply at the time. Applications surged. More than 13,000 allotments were awarded then, representing a tiny fraction of land in Alaska.

But the program ended in 1971, before many of the 3,000 or so Natives serving in the military returned to Alaska.

“The Native veterans never got that assistance, or they didn’t know about this allotment push,” Illingworth said.

Angapak planned to apply for the land-allotment program in his early 20s. But the U.S. Army drafted him in 1969, whisking him to Turkey to be a communications specialist for two years.

“As military personnel you get very engrossed and busy," he said recently. "I got drafted, and then I didn’t even think about the allotments. The only contact we had back then with the village was mail, and we didn’t apply.”

After he and others came home, they began advocating for a special application window for veterans.

But it wasn’t until the mid-1990s that the issue got traction in Congress, after the Alaska Federation of Natives took up the issue, Angapak said. He’d risen through the ranks at the organization. He and fellow veterans began making regular pilgrimages to Washington, D.C., to testify on allotment bills submitted by the Alaska delegation.

It paid off in 1998, when Congress opened an 18-month application slot. It applied only to veterans in active duty between 1969 and 1971, a period of especially high service for Natives.

Angapak received his allotment after the 1998 law passed. It’s near the village of Tuntutuliak where he was raised, not far from the land his father received around 1971. It connects him with generations to come.

Many Alaska Natives weren’t so fortunate, like Bill Thomas, the former state lawmaker from Haines.

Thomas returned to Alaska from the war in 1968. A 21-year-old then, he thought only elders could apply.

“We came home and we self-medicated (with alcohol), we called it, for a while,” said Thomas, 72 and also an advocate for the allotments. “We didn’t think about filing for a Native allotment back then.”

About 250 veterans received allotments after the 1998 law passed, the Bureau of Land Management said.

The problems included the short application period and the need to prove occupancy of the land, Angapak said.

Realizing the provision’s shortcomings, Angapak made his promise to Stevens, who later died in 2010.

Angapak retired from AFN in 2013, a senior vice president. But with AFN’s support, he joined other veterans in continuing to trek to D.C.

The efforts paid off in March, when the lands bill sponsored by Sen. Lisa Murkowski passed. It included a version of a bill from Sullivan creating a new application round for those in the military from Aug. 5, 1964 -- after President Lyndon B. Johnson sought congressional approval for direct involvement in Vietnam -- to the end of 1971.

Sullivan last month recognized Angapak’s decades of “tireless” advocacy, presenting him with a signed copy of the land legislation and a pen used by President Donald Trump to sign it.

“He’s been one of our great Alaska Native leaders,” Sullivan said.

The application period this time will be five years. The BLM must finalize the rules and begin accepting applications by September 2020.

Some federal lands will be off limits, including national forests and parks, and the Arctic National Wildlife Refuge and the National Petroleum Reserve-Alaska.

But veterans won’t need to prove occupancy of the land.

That will provide new opportunities for some, including Thomas. But there aren’t expected to be many allotments available in Southeast, if any. The region is largely national forests.

Thomas will likely have to select a tract somewhere else in Alaska, he said. “A lot of people around here aren’t happy about that,” he said.

Conservation groups criticized this new round of allotments in a letter to Congress, saying it would privatize hundreds of thousands of acres for an issue that was addressed in 1998.

Angapak said he disagrees with the groups. But he supports their speaking out.

Freedom of speech is one of the liberties he and other veterans helped protect, he said.