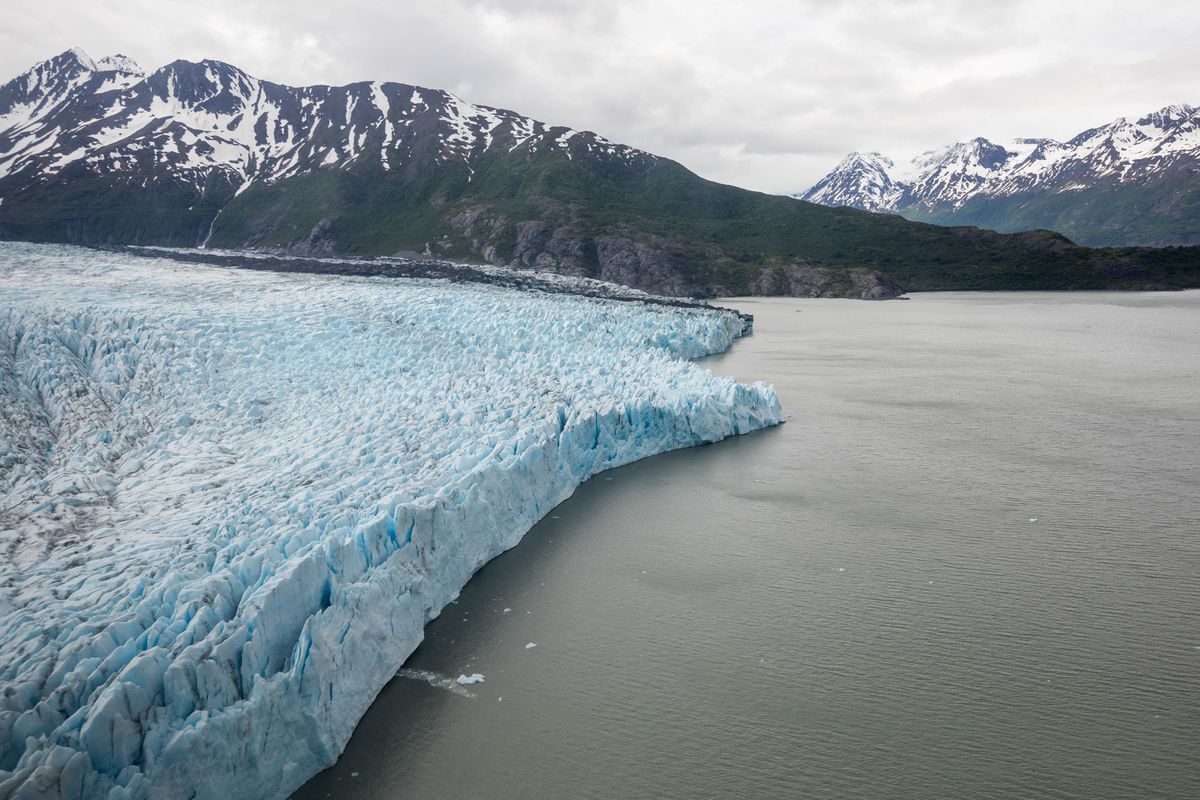 The face of Colony Glacier looms over Lake George in 2018. Glaciers are popular destinations for tourists, but access to them is changing fast as they recede. (Loren Holmes / ADN)

The face of Colony Glacier looms over Lake George in 2018. Glaciers are popular destinations for tourists, but access to them is changing fast as they recede. (Loren Holmes / ADN)

Visitors can no longer travel onto the toe of Spencer Glacier, a spectacular sheet in the Chugach Mountains near Portage accessible only by train and receding by an estimated 100 feet a year.

Last year’s unusually warm weather finally thinned the ice at the base of the glacier to the point it’s no longer safe, according to the owner of Ascending Path, a Girdwood-based company that leads glacier tours.

The sudden depletion of stable ice forced the company to fly glacier travelers onto the more stable mid-zone, where they feast on crab legs, sleep on cots beneath dome tents, and hike or climb ice.

It was a matter of climate reality.

“It just makes sense to have access to glaciers. People really want to see them, visitors and locals,” he said. “But they’re all melting quickly.”

Glaciers have always been one of the big attractions for travelers drawn north. Glimpsing giant sheets of frozen water is part of the Alaska bucket list — along with salmon fishing, northern lights, bears and wolves.

But the glaciers of the nation’s only Arctic state are melting faster than any other.

And at least some tourists are coming up just to see them.

“People really want to see them before their access is cut off‚” said Paul Roderick, director of operations for Talkeetna Air Taxi, which flies customers over the ice fields of Denali and the Alaska Range. “People know more about glaciers than they had. ... People are actually asking how fast they are receding. Before they barely knew what glaciers were.”

Alaska Range pilots routinely fly over glaciers that, say, have moved a half-mile from a lake they once touched or over the rocky receding lines of moraines that used to mark the limits of the ice, Roderick said. The lower half of Denali’s famed glaciers — the Ruth, Tokositna, Kahiltna — are falling apart, eroding from the edges, and making it harder to access mountain climbing routes.

[How many glaciers are in Alaska? There’s no easy answer]

“There is more interest," said Peter Schadee with Anchorage Helicopter Tours, which flies out of Anchorage, Knik River Lodge and Talkeetna. “We’ve seen an interest in glaciers ... worldwide, from places like Australia where they don’t have any.”

Alaska has more glaciers than any other state. Glaciers here are big enough that most won’t melt entirely anytime soon.

Matanuska Glacier, a popular destination about two hours from Anchorage along the Glenn Highway, is shrinking dramatically at its toe but is nowhere near disappearing.

Still, Wray notes, clients now hike to an ice climbing destination they used to fly into. Elephant Wall, a huge feature near the glacier’s toe, used to be a popular spot to take kids climbing, he said. “Now it’s gone.”

From ice to water

Climate change is perhaps more visible in Alaska than anywhere else in the United States: Thawing permafrost is wreaking havoc on roads, pipelines and runways; coastal villages are pummeled by winter seas due to diminishing sea ice.

Glaciers worldwide are projected to lose 18% to 36% of their mass by 2100, resulting in almost 10 inches of sea level rise, according to a new review of glacier research data published in the Journal of Glaciology. Alaska’s 25,000 glaciers will lose between 30% and 50% of their mass by the end of this century, according to the report.

Since the 1990s, the retreat of glaciers in Alaska has made a disproportionately large contribution to global sea level rise, according to a U.S. Geological Survey report from 2016. Alaska’s glaciers lose enough ice — 75 billion tons — to fill 150,000 Yankee Stadiums with water each year.

The ghosts of the state’s glaciers also give visitors a sense of the immediacy of a warmer planet.

Guides say they walk a delicate line between educating clients on the science of vanishing glaciers and getting into the politics of climate change.

‘Where the glaciers were’

St. Elias Alpine Guides, a McCarthy-based outfit that leads Kennicott Glacier hikes, kayaking and rafting trips, instructs guides to stick to the basic facts: We’re in a warming cycle, and glaciers are receding.

“Our guides don’t have any kind of global warming spiel, because it’s such a highly politicized topic,” said co-owner Anya Voskresensky. “None of our guides are experts in the field, they’re not climatologists. We encourage them to be gentle with that subject.”

Schadee, the Knik tour operator, says it’s hard to avoid talking about the speed at which the ice is retreating.

An enormous iceberg that calved off Colony Glacier near Knik Glacier is the largest he’s ever seen in the 15 years he’s operated helicopter tours up the Knik River valley. The glacier itself has receded by about a quarter mile, the sheer ice wall at its face replaced by a taper.

“The number of events are increasing where we see really large icebergs breaking off. That’s alarming,” Schadee said. “We’re lucky enough to where they’re pretty significant glaciers so they’ll be around for a while. You have to be careful with the politics about it. But we certainly feel we have a legitimate reason to point out where the glaciers were and ... how fast they’re melting."

Note: This article has been edited to correct that Major Marine Tours operates out of Seward, not Whittier.