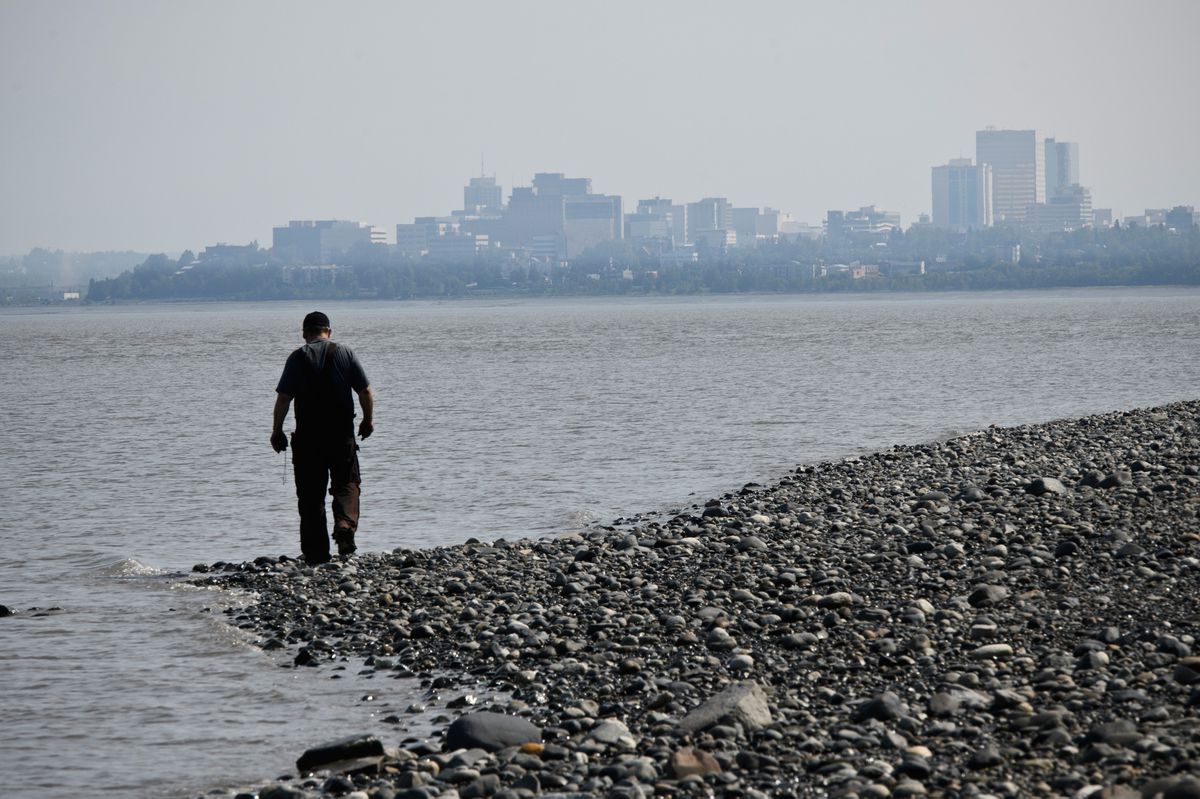 Smoky air limits the view from the beach near Point Woronzof, where a man walks the shoreline on June 27, 2019. (Marc Lester / ADN)

Smoky air limits the view from the beach near Point Woronzof, where a man walks the shoreline on June 27, 2019. (Marc Lester / ADN)

Update, 10 a.m. Friday: The municipality of Anchorage has issued an Air Quality Health Advisory for Friday through Sunday, reflecting that wildfire smoke “has reached concentrations considered unhealthy for sensitive groups.”

As of 7 a.m., the concentration of ultra-fine particles from smoke reached a concentration considered unhealthy for the general population, officials say. People are cautioned against strenuous exercise and exertion; children, the elderly and people with health, heart or lung issues should remain indoors.

Smoke from the Swan Lake fire will continue to blanket Anchorage and the Kenai Peninsula for the remainder of the week and, likely, most of the weekend, according to the National Weather Service.

Between Wednesday and Thursday, air quality throughout Anchorage went from “good” to “moderate,” but did not reach levels that would cause the municipality to issue an air quality advisory.

On the Kenai Peninsula closer to the fire, winds are expected to continue to push smoke along the Sterling Highway toward the communities of Cooper Landing and Moose Pass. An air quality advisory issued for the week of June 24 advised the public to expect conditions ranging from “good” to “unhealthy,” with areas immediately downwind from the fire experiencing a “hazardous” level, according to Monday advisory from Alaska Department of Environment Conservation. An updated advisory is expected Friday.

“We will continue to reissue advisories as long as there is smoke impacting the communities," said Mark Smith, with the Division of Air Quality.

Matt Stichick, a municipal air quality specialist in Anchorage, said the city has received a "handful of calls a day” about the smoke. Complaints include irritated eyes and lungs, scratchy throats and coughing, he said.

“Smoke is one of those pollutants that can definitely affect people with a sensitivity in an irregular fashion,” Stichick said.

The federal Environmental Protection Agency’s Air Quality Index (AQI) is used to determine when an advisory is warranted. In Anchorage, fine air particulates are measured in the Airport Heights neighborbood and in Eagle River.

Thursday morning, the air monitor in Airport Heights spiked to just above the level considered “unhealthy for sensitive groups” for several hours, but then returned to moderate levels.

Stichick said the municipality would issue an advisory when an AQI is anticipated to average a level considered “unhealthy for sensitive groups” for a 24-hour period, as they did during the McHugh Fire in 2016.

“Especially at night, a temperature inversion traps smoke in the area” said Lawson.

He’s confident that the ridge of high pressure will be pushed to the east on Sunday, which should temporarily cool the region. Unfortunately, this could allow for southerly winds to bring more smoke into the area. But there is also a chance that an offshore breeze early next week could push some of the smoke back out of Anchorage.

At the Allergy, Asthma and Immunology Center of Alaska in Anchorage, eight additional filtration units were being used Thursday to keep the air clean enough for patients, said Dr. Jeff Demain. Most patients seen on Thursday were having problems with the smoke, he said.

Demain clarified that smoke wasn’t the cause of their problems, but exacerbated their already compromised respiratory systems. For people having problems, he recommends staying inside or using a N95 mask, designed to filter small particulates, when going outdoors.

Individuals not affected by the smoke at its current concentrations should be able to spend time outside. If levels reach “very unhealthy” conditions, Demain and the EPA suggests avoiding prolonged or heavy exertion outdoors.

For Southcentral residents wondering when the best time would be to get outside this week for hiking, biking, or just enjoying the hot, sunny weather, Lawson said it’s difficult to forecast.

However, if he had to predict it, “Monday or Tuesday, after the ocean breeze pushes the smoke out of Anchorage," he said.

An earlier version of this story incorrectly identified a recommended particulate filtration mask for smoke as an M95 mask. The correct name of the mask is N95.