Montana Creek fire in Mat-Su under ‘initial attack’; area residents urged to be ready to evacuate 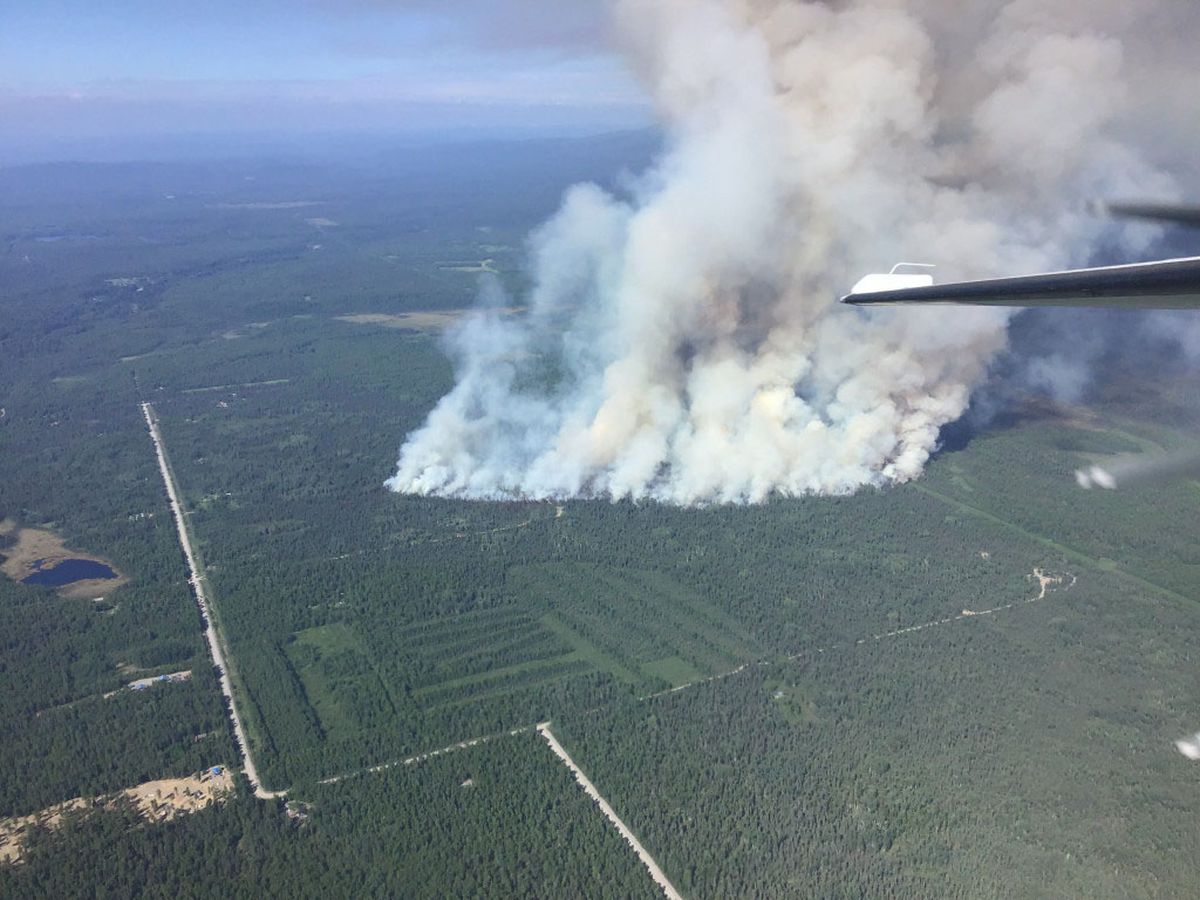 An aerial photo of the Montana Creek Fire taken on initial attack Wednesday, July 3, 2019. At 5 p.m. the fire had grown to an estimated 70 acres and was burning east of Montana Creek Road near Mile 98 of the Parks Highway. (Jason Jordet/Alaska Division of Forestry)

An aerial photo of the Montana Creek Fire taken on initial attack Wednesday, July 3, 2019. At 5 p.m. the fire had grown to an estimated 70 acres and was burning east of Montana Creek Road near Mile 98 of the Parks Highway. (Jason Jordet/Alaska Division of Forestry)

A wildfire near the Parks Highway south of the Talkeetna cutoff Wednesday afternoon prompted aggressive firefighting efforts from multiple agencies and calls for nearby residents to be ready in case they needed to evacuate.

The wildfire is burning about 2.5 miles east of the Parks Highway, near Mile 98, by Montana Creek Road, Alaska State Troopers said.

The Montana Creek fire was originally reported as 3 acres in size just before 3 p.m. By 7:30 p.m. the wildfire had spread over 200-300 acres based on an estimate from the air, according to the Division of Forestry, the lead agency on the fire. The cause of the fire was unknown.

“We are in the initial attack right now,” Stephanie Bishop with the Division of Forestry said late Wednesday night, adding that firefighters’ No. 1 priority was to get the fire’s perimeter set.

Emergency managers issued a “Level 1: Ready” evacuation alert for residents near Montana Creek, meaning that although an evacuation order had not been issued, they should be ready to leave the area if necessary.

The wildfire threatened one structure, the Division of Forestry said, but there have been no injuries or structures lost so far. Authorities were not able to say what kind of structure it was or how close it was to the fire.

There are currently 130 personnel responding to the fire, Bishop said Wednesday night. She estimated that around eight agencies have responded to the fire so far, including the Division of Forestry, the Matanuska-Susitna Borough, Talkeetna, Houston, Willow, Alaska Army National Guard Black Hawks, Palmer Heliattack and an air tanker from Saskatchewan.

Ken Barkley, emergency services director for the Mat-Su Borough, said the fire is burning to the east.

The Upper Susitna Senior Center — just south of the Talkeetna Spur Road — is serving as a gathering place for those who have voluntarily evacuated, according to authorities.

Veteran Iditarod musher Karin Hendrickson, who lives in the area, said on Facebook that the fire was about 3 miles from her kennel and that she and her dogs evacuated.

Fire about 3 miles from kennel. Dogs and I are all evacuated safely. Thanks for all the concern. Let’s hope they get this thing under control quickly.

“Let’s hope they get this thing under control quickly,” Hendrickson said in the post.