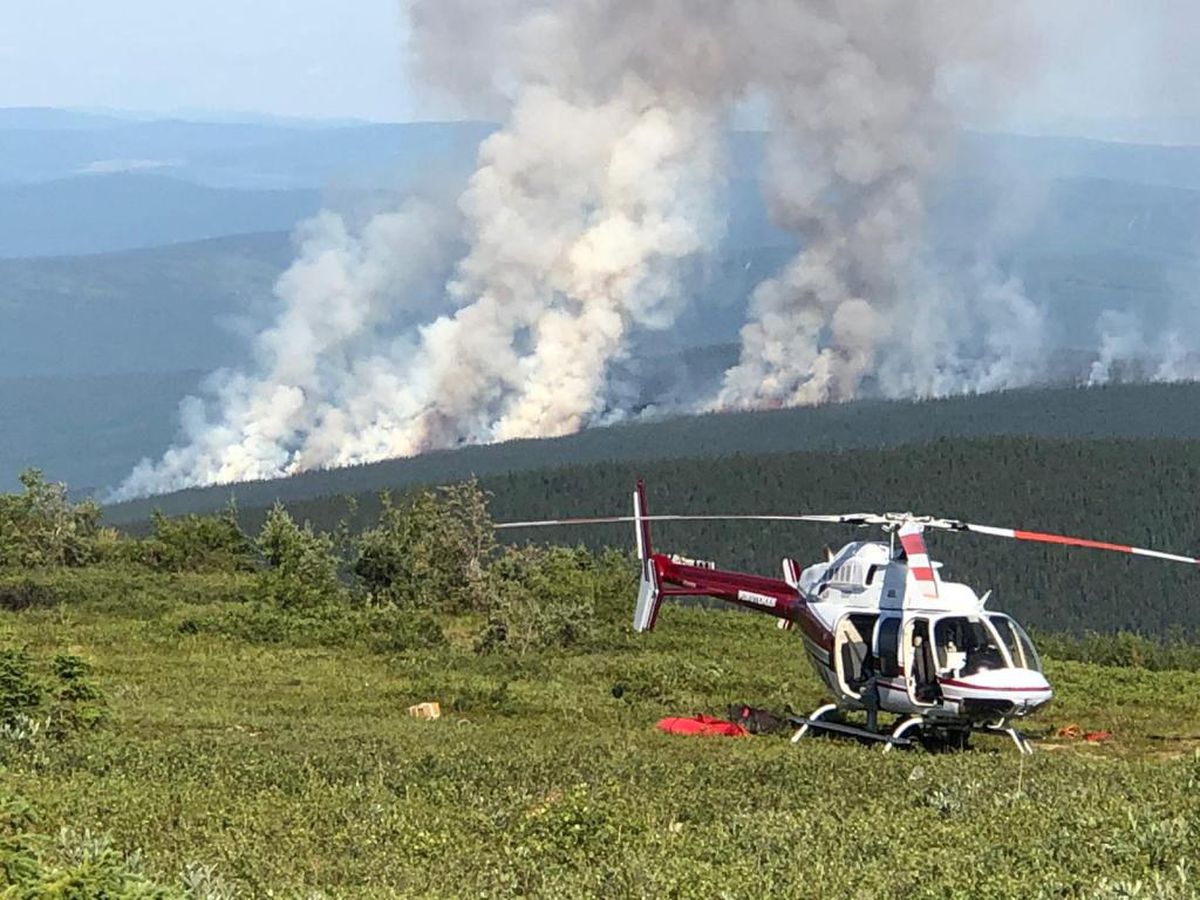 The strategic firing operation just north of the Old Murphy Dome Road between Martin and the Dome as of 11 p.m. Friday, July 5, 2019. (PNW2 Barry Schullanberger)

The strategic firing operation just north of the Old Murphy Dome Road between Martin and the Dome as of 11 p.m. Friday, July 5, 2019. (PNW2 Barry Schullanberger)

A wildfire near Fairbanks triggered precautionary evacuation warnings for hundreds of properties as crews readied for a “burnout” operation to try to stop the fire.

Clouds, cooler temperatures and higher humidity limited the spread of the Shovel Creek Fire toward the populated Goldstream Valley area Thursday, according to the Alaska Interagency Coordination Center. The plan Friday was to burn trees and other potential fuel for the fire.

Fire officials have issued Level 2 alerts -- be ready to evacuate if necessary -- for residents of 180 structures in the Lincoln Creek, McCloud and Vancouver subdivisions. Residents in Martin and Perfect Perch neighborhoods are under an evacuation order, though some have chosen to stay put, officials said.

Fire managers are recommending a Level 1 evacuation level for the Drouin, Hardluck, Moose Mountain, Coyote Jones, and Hattie Creek neighborhoods -- a total of more than 740 structures. The alert means only that residents must be ready for potential evacuation and take steps to prepare family members with special needs, boats or ATVs, and pets or livestock, fire officials say.

The alert may sound alarming to residents of the upper Goldstream Valley but is only a precaution, fire public information officer Kale Casey said in a video statement. There’s been no fire movement in the past five days, Casey said Thursday.

“We’re getting right to work on containing this problem fire,” he said.

“We’re just making sure everybody’s alert there’s a big fire up there,” Welsh said, adding that the weekend was expected to bring a change. “Fires that haven’t done much since Saturday, Sunday are potentially going to become active again.”

A community meeting was scheduled for 6 p.m. Friday at the Ken Kunkle Community Center in Fairbanks.

Meanwhile, the Montana Creek Fire near Talkeetna that sparked fears of evacuations earlier this week exhibited little change into Friday, officials said. The Montana Creek Fire was estimated at a little over 250 acres. Suppression efforts continued Thursday into the evening with tankers, helicopters and ground crews.

There were nearly 120 wildfires burning a total of roughly 645,000 acres across Alaska as of Friday.

Officials said “extremely flammable” conditions were reported for the spruce stands of the Upper Yukon, with 23 fires burning within the state fire zone that covers the eastern Interior. Similar conditions exist in Southcentral Alaska.

Spruce stands “will ignite easily, spread rapidly at 1 mile per hour or faster, torch and spot prolifically up to a quarter mile or more, and exhibit intense crown fire behavior,” the Division of Forestry said in an update Friday that listed temperatures above 80 degrees and low relative humidity as thresholds.