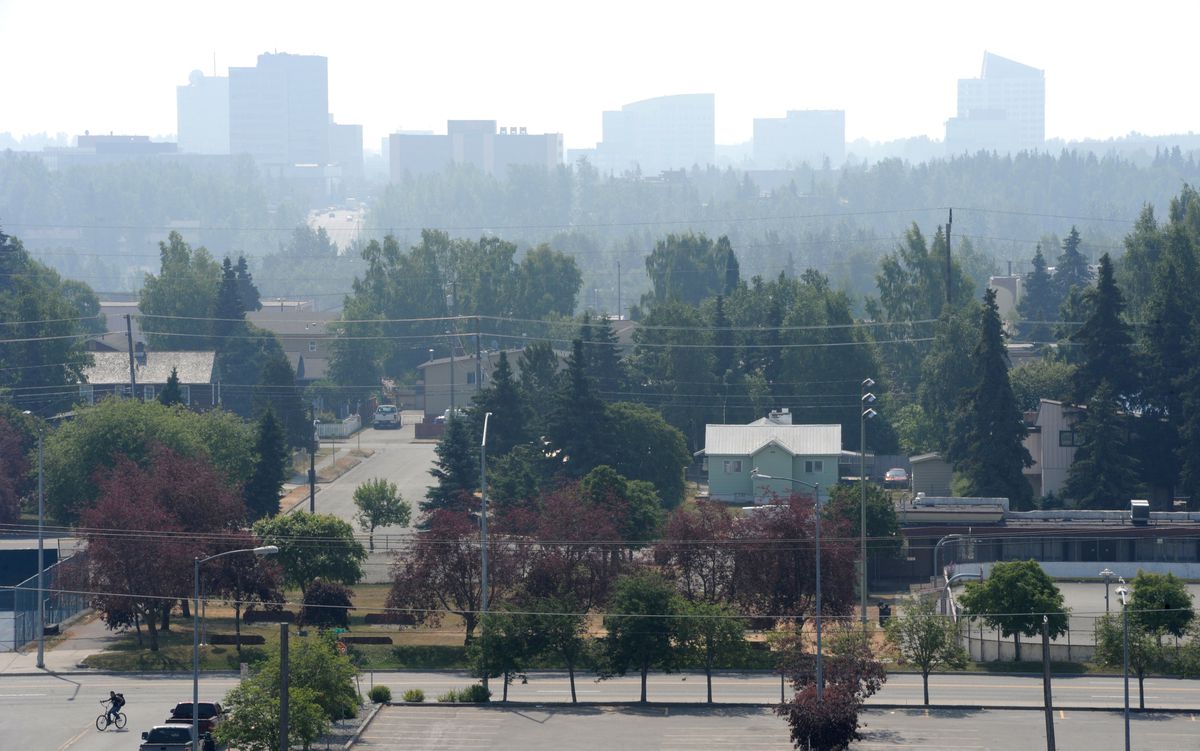 Midtown is obscured by smoke from the 92,657 acres, or about 144 square mile Swan Lake wildfire on the Kenai Peninsula has settled in Anchorage reducing the visibly and lowering the air quality to an "unhealthy" level on Sunday, July 7, 2019. (Bill Roth / ADN)

Midtown is obscured by smoke from the 92,657 acres, or about 144 square mile Swan Lake wildfire on the Kenai Peninsula has settled in Anchorage reducing the visibly and lowering the air quality to an "unhealthy" level on Sunday, July 7, 2019. (Bill Roth / ADN)

Officials took the unusual step of closing some forest lands on the Kenai Peninsula to all uses as more hot, dry weather pushed the growing Swan Lake wildfire to the edge of the Chugach National Forest over the weekend.

Smoke from the fire pushed into Anchorage on Sunday, where air quality was at an “unhealthy” level as of 11 a.m. on Sunday.

The Swan Lake fire, ignited by a lightning strike on June 5, has been burning in Kenai National Wildlife Refuge land but is now on the border of the national forest land.

The Chugach National Forest released a notice of “special closures” of forest lands on Saturday night.

The Resurrection Pass trail itself remains open, as does the popular Porcupine Campground and Gull Rock Trail in Hope.

“This fire is unusual. These weather conditions are unusual, to be so dry and warm for such a consistent period of time,” King said. “We’re closing these areas because we want to make sure we’re keeping public safety in mind.”

The closures include the Swan Lake, Romig, Juneau Lake and Trout Lake public use cabins. King said people with reservations in the next two weeks for the cabins have been contacted individually about the closure.

It also means fire managers are relying on helicopter drops of water because firefighters can’t safely work on the mountainous terrain, he said.

A new air quality monitoring station has been installed near Cooper Landing, where smoke from the wildfire has settled into valleys for weeks, obscuring mountains and hanging like a blanket over Kenai Lake. On Sunday morning the air quality reading was “very unhealthy,” there, according to data from the U.S. Forest Service which can be accessed online at tools.airfire.org.

More than 220 people attended or watched a live stream of a community meeting in Cooper Landing Saturday, where some residents confronted fire officials about smoky air and missed business and recreational opportunities during the short summer season.