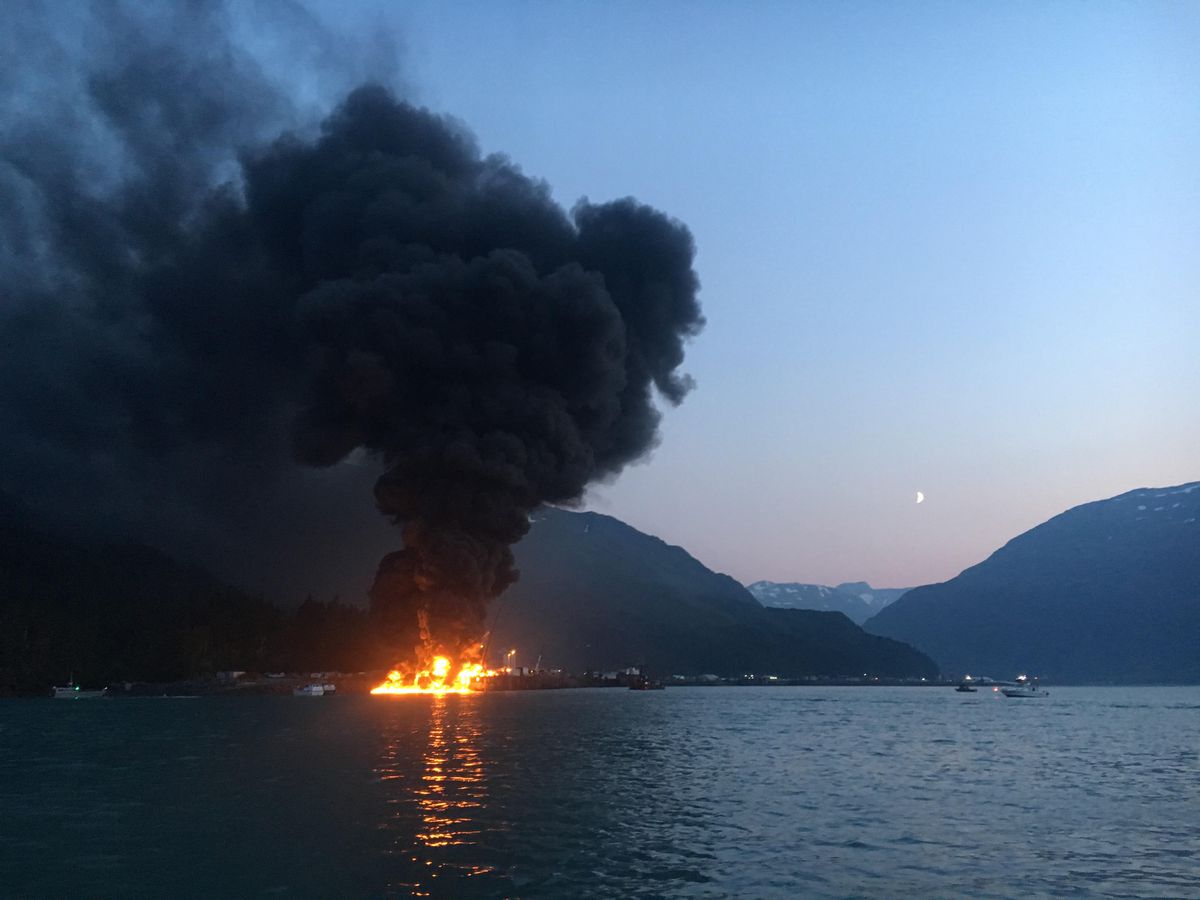 A search was underway Monday, July 8, 2019, for two people after an overnight explosion aboard a fishing vessel at a dock in Whittier in Southcentral Alaska. (Photo by Patrick McCormick)

A search was underway Monday, July 8, 2019, for two people after an overnight explosion aboard a fishing vessel at a dock in Whittier in Southcentral Alaska. (Photo by Patrick McCormick)

The Coast Guard late Monday suspended the search for a 49-year-old Cordova man who went missing after the explosion at a dock in Whittier.

A propane tank exploded on a fixed barge at the Delong Dock around midnight, and the fire spread to the pier and a fishing vessel, the U.S. Coast Guard. The fishing boat was the 99-foot Alaganik, with one person aboard. Two people were initially reported to be on the boat.

The dock is operated by the city of Whittier.

The resulting fire spread to the dock and three boom trucks on it, according to city officials.

The cause of the explosion is under investigation. The Whittier Volunteer Fire Department, Anton Anderson Fire Response Team and Girdwood Fire Department responded. The fire department confirmed the fire was out by 2:50 a.m. Monday.

An MH-60 Jayhawk helicopter searched for the missing man, the Coast Guard said. No one else was reported injured.

The fishing vessel had a 5,500-gallon fuel capacity. It sank at the dock, which houses several fish companies. A Coast Guard cutter established a 100-yard safety zone around it, USCG spokeswoman Petty Officer Amanda Norcross said. The dock is closed as the investigation and damage assessment continues.

Whittier Harbor Fire, Girdwood units are headed back to quarters. Thank you Station 9 for covering the Girdwood Valley....

Kelly Bender and her family own a Whittier-based charter, the Lazy Otter. The noise of the explosion just before midnight Sunday sent them running to figure out what happened. They saw the dock was on fire.

Bender said her husband and son -- an off-duty Anchorage firefighter -- jumped into the company’s boat with dewatering pumps.

Another of the company’s boats joined other vessels on the water searching for the two missing people but saw no sign of them, she said.

The state fire marshal was en route to the scene Monday morning.

[This story has been edited to say that the boat was at a dock operated by the city of Whittier, not by the Alaska Railroad.]