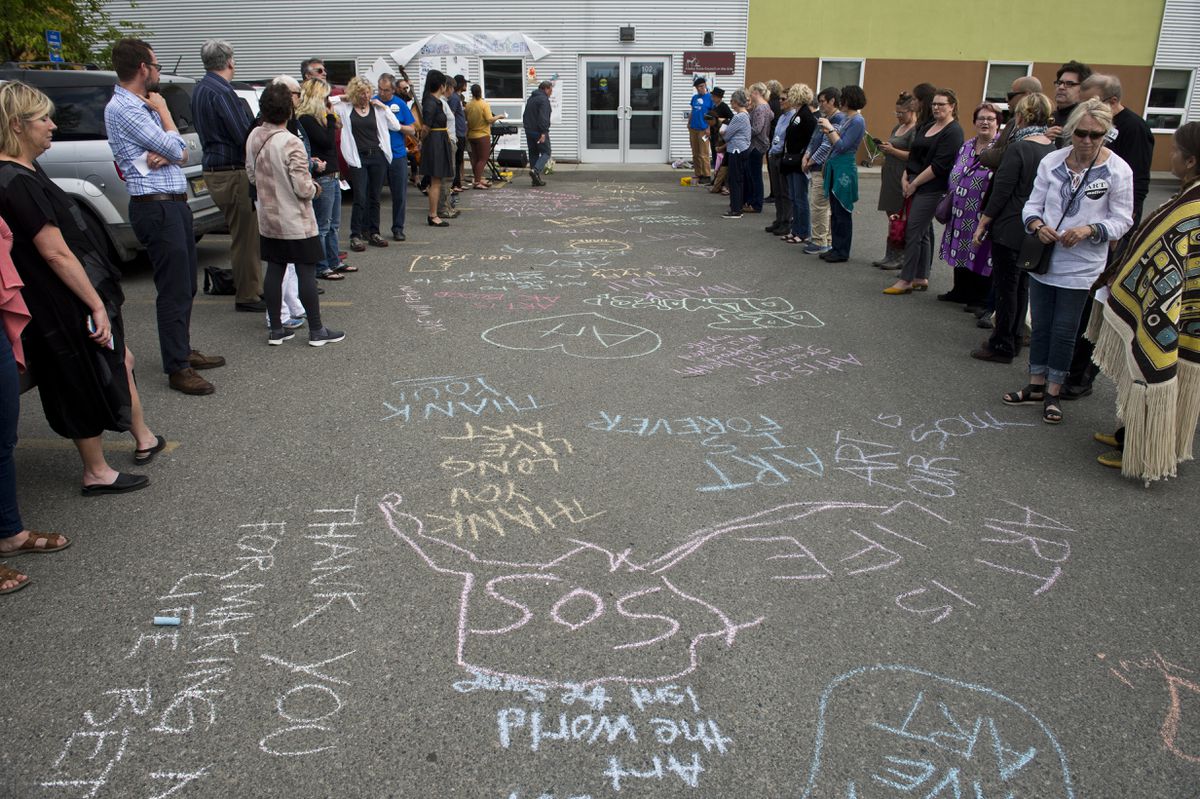 Artists and supporters of the Alaska State Council on the Arts gathered outside its offices in Anchorage to say farewell on Monday afternoon, July 15, 2019. The agency closed Monday due to its loss of funding by veto by Gov. Mike Dunleavy. (Marc Lester / ADN)

Artists and supporters of the Alaska State Council on the Arts gathered outside its offices in Anchorage to say farewell on Monday afternoon, July 15, 2019. The agency closed Monday due to its loss of funding by veto by Gov. Mike Dunleavy. (Marc Lester / ADN)

Sheryl Maree Reily spoke quietly as she reflected on the loss. Wearing a long, black dress with a dark lace veil, she was symbolically dressed for a funeral.

Reily was one of about 50 people who gathered outside the Alaska State Council on the Arts Monday to mourn the passing of the organization, which closed its doors after its funding was eliminated by a budget veto by Gov. Mike Dunleavy earlier this month -- a $2.8 million cut.

The elimination of the agency leaves Alaska as the only state in the U.S. to be without a state arts council. According to council chairman Benjamin Brown, the state’s general fund contributes $700,000 of the council’s funding directly; $700,000 in federal funds through the National Endowment for the Arts and $1.5 million in private foundation funds were also vetoed and can’t be accepted.

Although the gathering had a somber tone, community members also assembled to thank outgoing employees who were terminated with the council’s shuttering.

“I came here today to give my support, acknowledge the hard work and the achievements of this organization,” said Reily, who was a member of the council’s visual arts advisory committee.

Attendees wore “Art Matters” stickers and wrote messages of support in chalk on the pavement outside the front of the council office in Mountain View as local musicians played. Organizers were planning a larger show of support for employees as they left at the end of the day, but most wanted to complete their day without any extra ceremony. Those who left while the crowd was still at the building were visibly shaken.

Keren Lowell, literary and visual arts coordinator, was emotional as she spoke about her time at the council. She also had finance and administrative duties during her seven years there. Although those were less gratifying jobs than working directly with the art, she said they were probably some of the more valuable services the council provided.

“That’s why this agency is so amazing,” she said. “We had a good handle on how money works and how the arts work in money. We did a good job. I’m proud of what we did.”

Lowell pointed out that while public perception might be that the organization was mainly about funding, they did much more, from supporting schools, teachers and rural communities to coordinating with other arts organizations and facilitating professional development for artists.

“Instead of thinking about us as an organization, we talk about being a node and all of the other arts partners used us as a pass-through or as a center or as a collection point for all of the activities going on,” Lowell said. “We communicated with people, which led to more opportunities and supported the work that they did.”

Reily said the loss of the council will be a big hole in the arts community.

Reily spoke about the perception of the arts as something that are subsidized without a return.

“I think it’s a misconception,” she said. “They are an economic driver. They are the underpinnings of the tourism industry, secondary to the landscape. People come here for the culture, and they come here for the arts. It’s the stories that people tell in magazines that bring people here that the writers and poets write, the photographs that the photographers take.”

Quinton Smith, 26, of Anchorage, is an audio/video artist who operates the firm Landsick Media. Smith said he’s done some work with the state council on the arts. While artists will continue to operate in the state, the loss of the council will be considerable, he said.

“It’s devastating,” he said. “It’s incredibly regressive. We’re the only state in the entire country that doesn’t have a state council on the arts. Art is going to prevail. Art will be here.”